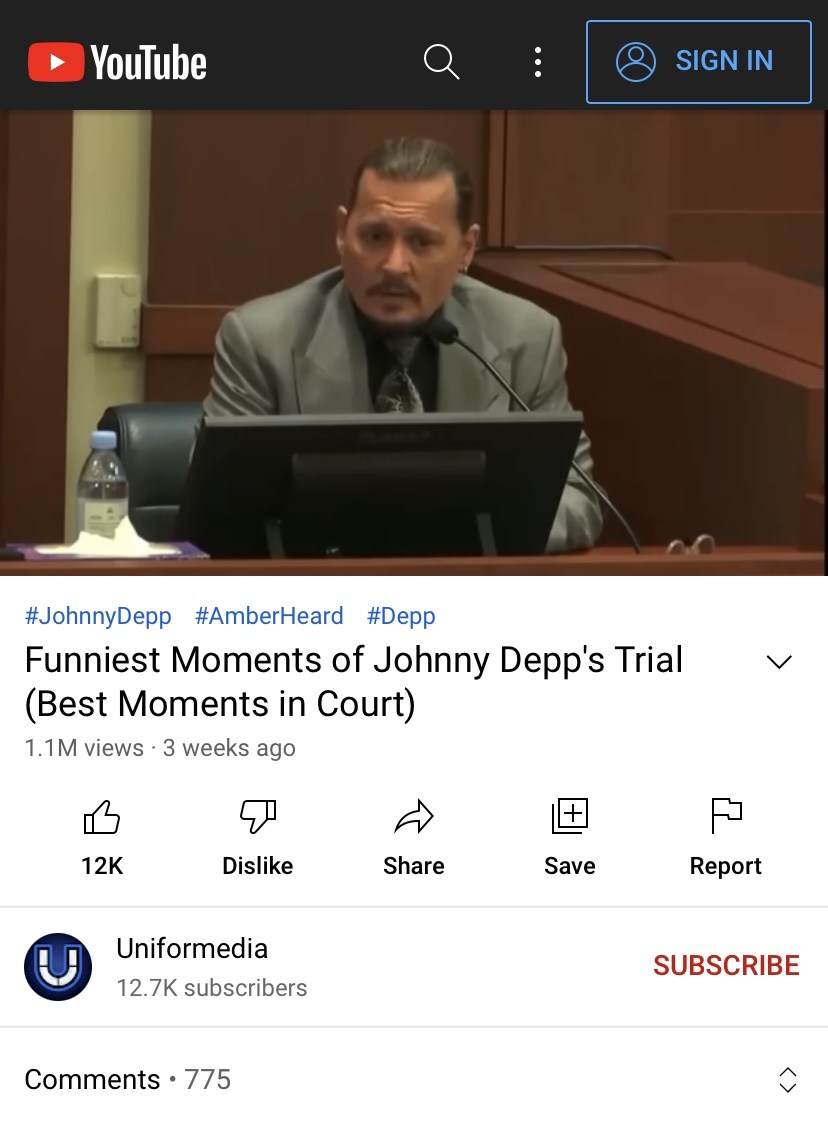 Since April 11, 2022, Johnny Depp has been suing his ex-wife for defamation, following an editorial written by Amber Heard in 2018, where she claimed to be the victim of domestic violence. The hearings, filmed, multiply the mutual accusations of violence. But the Internet has already chosen its camp.

On TikTok, the hashtag #JusticeforJohnnyDepp exceeds 16 billion views. Among the viral content are fans who defend the American actor, memesmocking the testimonies of his ex-girlfriend, to the rhythm of the most popular songs in the application.

” It’s something I’ve never seen on this scale before. In most of the cases I tracked, I was able to hide the keywords. But for this one, I always get recommendations on Youtube, on TikTok “, testifies Nicole Froio, who studies post-Me Too sexual violence at the University of York in the United Kingdom. To the point that Youtubers are starting to comment on the trialto gain millions of views.

“ On the networks, we forget that there are two people who are personally affected. Here we are discussing their private life publicly, taking it lightly. I don’t want to talk about the #WeHateAmberHeard hashtag. I want to talk about domestic violence »,

indignant Ruth Glenn, president of the National Coalition Against Domestic Violence (NCADV) in the United States.

The overwhelming support enjoyed by Johnny Depp is explained in particular by its status as a star. ” He has four decades of very dedicated fans “recalls Pamela Rutledge. Moreover, according to this specialist in social psychology in the media, he embodies an archetype of ” bad boy “. His excesses in terms of alcohol, drugs or violence never diminished his appeal as an artist “, on the contrary.

Nicole Froio refers to it as a ” transgressive masculinitye”, to which she links several of the characters he has interpreted, for example Captain Jack Sparrow in Pirates of the Caribbean. And these characters are so popular that the actor seems inseparable from them in the eyes of the public.

“ There is a degree of desirability around violent men that we don’t like to admit, but that’s how we’re socialized. And women are more likely to feel sympathy for men who present themselves as victims, because we are taught that we must take care of them. “, she adds. This attraction is found, for example, in the trend on TikTok where several women have gone so far as to take up the story of sexual violence that Amber Heard claims to have suffered, to make it a sexy scene.

These ” very dedicated fans “can develop a relationship” parasocial with their favorite star. ” When people invest in a one-way relationship with a celebrity, they take away part of their identity.. So when they feel she’s under attack, they step in to support her “, explains Pamela Rutledge. This leads them, for example, to think they know Johnny Depp, and to believe him incapable of attacking Amber Heard, to the point of demonizing her or making fun of her.

Facing him, Amber Heard leaves with a clear popularity disadvantage. By spreading these accusations, she is also perceived as ungrateful to the one who would have helped her prove herself in the cinema. Moreover, the actress does not embody the “ good victim since at best she would have defended herself, at worst she would have exercised violence herself.

In a complex trialwhere evidence is brought and refuted on both sides, where several witnesses accuse each party of lying, difficult to clearly distinguish the victim and the aggressor, unlike the Weinstein affair for example.

But beyond this confusion, Nicole Froio evokes a ” disinformation campaign “. ” Johnny Depp clearly has a big machine behind him, and a lot of money. Amber Heard’s camp was a little naive to believe the MeToo movement would have such resonance that Johnny Depp’s weight of fame wouldn’t matter », Analyzes Pamela Rutledge.

Data analyst Christopher Bouzy had thus reported having discovered at least 6,000 fake accounts on Twitter in 2020, forming a “ coordinated campaign against Amber Heard. Media like The Daily Wire have paid advertisements against the actress, recently revealed in the press.

Apart from fans convinced of the innocence of the actor and botsthe pro-Depp discourse is spreading like wildfire on the networks, with memesmontages, parodies or fancams. Their reach is increased tenfold by their number and their virality.

” which contributes to the memeification events is that these two people have built their careers in the media. That means there’s plenty of footage available – in addition to Court TV, which is streaming the trial, develops Pamela Rutledge. VYou can therefore use these images to develop your interpretation of the story. If you create a meme about Amber Heard that looks sad and suggests she’s mimicking Kristen Stewart of Twilight or an avatar of sims, what you’re telling people is that she’s faking, that she’s fake. They may just laugh at the comparison, but the heart of the message undermines its credibility.”

The information conveyed by memes is easier to understand than nuanced testimonies. They maintain the audience’s confirmation bias and appeal to emotions rather than critical thinking. For example, the researcher explains how the testimony ofa surgeon who questioned one of the testimonies of Johnny Depp has hardly been taken up on the networks: what is at stake is more technical than funny or moving, and therefore less easy to broadcast. In this context, feminists are perceived as killjoys, according to Nicole Froio, if they oppose a viral and funny trend.

Content on social networks thus influences traditional media. According to Pamela Rutledge, many journalists start their research on the networks. Even if they then seek other data, the amount and orientation of the information available influences the image they create for themselves. ” I’ve seen more articles about what’s happening on social media than what’s happening at trial: info about the lawsuit is relatively thin compared to all the talk on the internet. And on the networks, people have made it a form of entertainment in its own right “, she describes.

An obstacle for victims of domestic violence

According to several associations, this media coverage of hearings could also have consequences for victims of domestic violence in general. Ruth Glenn believes that the coverage of the trial is hurting them:

” If I was a victim trying to decide if I should stay in a situation where someone is hurting me and I see everything going on, I would probably be less inclined to tell my story or seek help. . “Am I going to suffer like this person suffered? Will I be ridiculed? Victims of domestic violence already face these kinds of barriers. In our view, this trial is an additional obstacle. »

She herself was harassed by some Johnny Depp fans on her personal accounts when she criticized certain hateful methods in the American media that targeted Amber Heard.

His association, however, makes a point of not commenting on the merits of the case. Usually, the NCADV (National Coalition Against Domestic Violence) which aims to raise awareness of domestic violence receives more donations from the general public during a high-profile case. This is not the case this time, despite an increase in the number of victims contacting them.

For Nicole Froio, denigrating or violent reactions to Amber Heard are part of a ” backlash “, a broader backlash that targets women who claim to be victims, a few years after the MeToo wave. ” We are seeing all kinds of backlash, which one could interpret as more conservative. And the discourse around this trial offers those who were furious that all these women are accusing all these men, but who didn’t know how to express it before, the opportunity to jump on the bandwagon. “, abounds Pamela Rutledge.

Instrumentalization of the case

According to an Insider articlethe trial is even exploited by some defenders of masculinist movements“ for men’s rights », especially in communities Reddit. They thus aim to prove that women can sometimes lie about the violence they suffer, and that men can be their victims.

Of course, men who are victims of domestic violence exist, but defending this idea sometimes leads some on the networks to take up misogynistic stereotypes. Amber Heard is accused of crying “ for fake “, to play comedy at the bar, to describe exciting scenes when she evokes sexual violence…” It’s a great insight into what people go through survivors who are not celebrities. They do not experience this through social networks, but can certainly experience it within their community, their family and in the face of the abusive person. says Ruth Glenn.

For other reasons, some feminists also side with the actor. They are afraid of having made a mistake once, by supporting Amber Heard before the discovery of the audio recordings where she speaks of having hit Johnny Depp.

They are afraid of not supporting a man, who does not correspond to the dominant image of victims of violence, and thus losing their credibility. Many claim that Amber Heard ” pushed back the cause of women by lying about these accusations. In 2020, however, Johnny Depp lost a libel suit against the newspaper. The Sun. The High Court in London had ruled that 12 of the 14 charges of abuse described were “ substantially true “.

Faced with a story that is difficult to untangle, the discourse becomes polarized. Nicole Froio emphasizes: “ There’s not a lot of space online to be wrong, to be like, “Oh shit, I learned some new stuff. In fact, I completely changed my mind about it.” So you always have to be straight right, be on the right side “.

If you or someone you know is a victim of domestic violence, or just want to learn more about it: