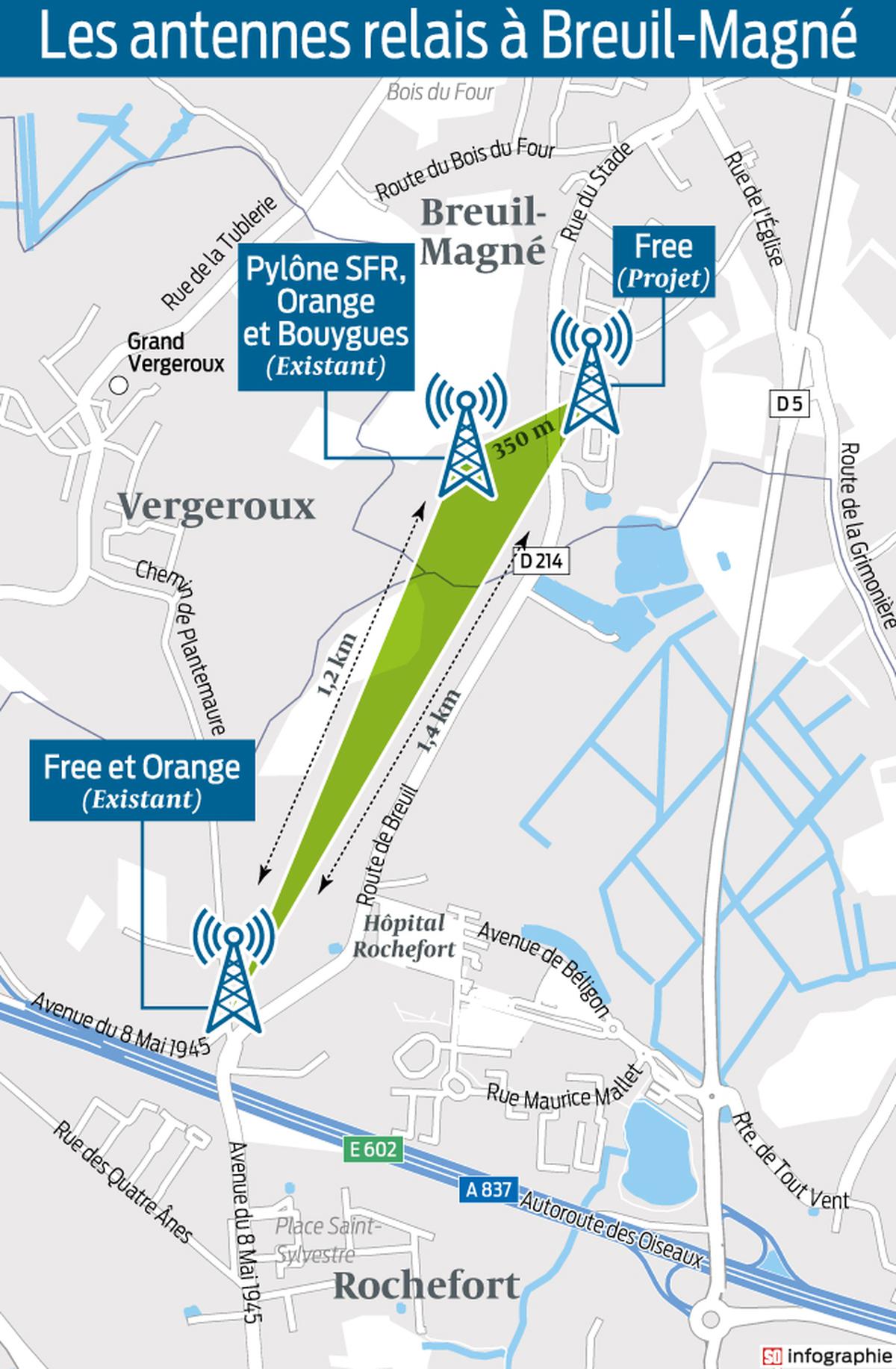 About fifty residents braved the cold and snow on Monday, December 12, to participate in a public information meeting organized by the municipality. Eager not to interfere in legal litigation…

About fifty residents braved the cold and snow on Monday, December 12, to participate in a public information meeting organized by the municipality. Wishing not to interfere in the ongoing legal dispute between the City and Free, Mayor Patricia François presented the context “in a factual manner”.

In the spring of 2021, she received an information letter from the telephone company informing her of its intention to set up a relay antenna on the land of a company established in the artisanal zone (ZA) of La Fontaine, at the entrance to the town. First start for the chosen one: she receives a file containing the characteristics of an antenna fixed to… Chaillevette, on the peninsula of Arvert.

Never mind, several months later, in the spring of 2022, Free this time filed a preliminary declaration (DP) of works for the construction of this 37-meter high electric radio station, on the site of another company, always in the same ZA.

In the meantime, Patricia François consulted the services of the Departmental Directorate of Territories and the Sea (DDTM) and the urban planning department of the Urban Community of Rochefort Océan. With the same answer each time: “Because of a height greater than 12 meters, the antenna must be the subject of a building permit. » Meaning: town planning rules are more cumbersome.

On the basis of this advice, Patricia François opposes, at the beginning of the summer of 2022, the prior declaration of work. A decision challenged in court by Free who seized the administrative court of Poitiers on the merits but also in summary proceedings. On October 28, the judge in chambers issued an order first recognizing the urgent nature of the request because of “the public interest which attaches to the coverage of the national territory by mobile telephone networks”. Before estimating, as Free invited, the reason for refusal (the obligation of a building permit) “unfounded” under an article of the town planning code which provides for a simple prior declaration of antennas relay “regardless of their height” and provided that the footprint does not exceed 20 m².

This provision results from a ministerial decree signed in December 2018 in line with the Elan law (evolution of housing, development and digital technology), one of the main objectives of which is to improve digital coverage. With sanctions at the key for operators in the event of failure to fulfill their deployment commitments.

At the time, the “Moniteur des Travaux Publics et de la construction” indicated that “the Ministry of Territorial Cohesion hoped to encourage operators to invest in 20,000 sites and install 10,000 pylons”.

Pending the judgment on the merits, which will not take place for several months, Patricia François has been ordered to issue a decision of non-opposition to the prior declaration. What she did. On site, Free has just displayed the work.

Backed by an existing association, the Associative Collective for the Defense of Breuil-Magné (1) strongly opposes the project. Its members go around homes to raise awareness and get petitions signed. “Our objective is to reach half of the households”, assert Simon François and Renaud Poitiers. They are on track to achieve this: in four days, 200 to 250 of them, out of the 900 established in the municipality, have initialed the petition.

Sanitary considerations worry: “Houses are located only 50 meters away”, deplores the collective. If the school is not located in an immediate radius, schoolchildren live in this housing estate, whose houses will lose part of their heritage value.

But the most widespread fear is due to the proliferation of antennas. “Who tells us that another operator will not set up on private land to build its own pylon? », Annoys Simon François. The prospect of 40-meter masts surrounding the town in the future raises the eyebrows of residents, who also say they are not necessarily opposed to 5G.

In short, the filing of legal appeals against the project and referral to the administrative court is under study. “If we let it happen, it will be the door open to all operators”, assures Renaud Poitiers.

Charente-Maritime: the concentration of mobile phone relay antennas near Rochefort agitates the spirits