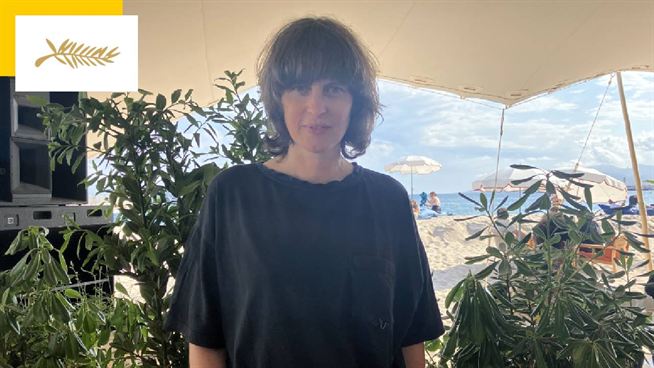 On the occasion of the Cannes Film Festival which has just ended, AlloCiné met several composers of film music to highlight their work. Meeting with Chloé Thévenin, DJ, and composer of La Montagne by Thomas Salvador.

Among the very many talents and personalities to have walked the Cannes red carpet this year, several composers of film music were there. As an institutional partner of the Cannes Film Festival, the Sacem* wanted to highlight the work of music in the image, with a climb of the steps, concerts (Owlle, Pierre de Maere, Laura Cahen… ) and the arrival of film musicians to present their recent compositions for short and feature films.

In this context, AlloCiné met the DJ and producer Chloé, pillar of the French electro scene, who has multiplied for a few years, under the name Chloé Thévenin, experiences in film music, and more broadly in live performance (dance and theater).

After composing the music for Laurent Cantet’s latest film, Arthur Rambo, at the beginning of the year, Chloé Thévenin accompanied the film La Montagne by Thomas Salvador in Cannes, selected in the Directors’ Fortnight, winner of the SACD Prize in the Directors’ Fortnight, and for which she composed the original music. Meeting with Chloé Thévenin.

“I worked on the textures, which goes with the immensity of the mountain landscapes. In this film, there is also a dimension on the surrounding atmosphere which is very important. If only by the immensity of this space. The film follows a character who leaves his life, his job, to go and live in the mountains. He dumps everything. There is therefore a dimension, a somewhat personal and poetic quest. Personally, this is what fascinates me, and this is what also attracts me to the mountains. It is a film that is close to my heart personally for these reasons“.

“Filming in the mountains took place in rather special conditions. It was therefore necessary to make the images before composing the music. Then, the work of editing the film began – with the editor Mathilde Muyardwho is also the same editor as Arthur Rambo which I worked on. From there, director Thomas Salvador and Mathilde Muyard were able to feel when and where they wanted to have music. There was then a permanent exchange to refine the editing, and therefore the music so that it could come to fit organically into the film..”

First experiments in composing music for the cinema

Chloé Thévenin’s first film experiences date back to her collaboration with screenwriter and director Lidia Leber Terki in the early 2000s.I worked on her short and medium-length films, then she called on me for her first feature, Paris la Blanche.

The particularity of Paris la blanche is that it is a film taking place between France and Kabylie. Lidia Leber Terki therefore wanted me to work with Kabyle musicians. She wanted to see what I was going to do with it.

That’s what’s interesting about screen music: sometimes it allows me to go into areas where I wouldn’t have gone naturally. And finally, it was a wonderful exchange with musicians who play in the tradition of art, of oral transmission. I composed songs, and they played around that. I met some excellent musicians. It was great to mix electronic music and Kabyle music“.

“I released my first maxi in 2001 – 2002. Lidia Leber Terki had taken a piece for a medium-length film And from then on she asked me each time for her films.”

“I wanted to try my hand at film music. Each time, it was people who came to get me. When I started making electronic music, it was a time when electronic music was not recognized, and not particularly known. It remained very underground; it happened in raves, a few clubs…“

With the democratization of this music, we can see all the infinite possibilities that there can be

“With the democratization of this music, we can see all the infinite possibilities that there can be. A bit like when rock exploded, there were lots of categories. I like this job because electronic music is a pretty solitary job. At the time of composition, I work alone. So it’s good to have people come and take us out of our comfort zones.”

“What I like is that if someone comes to get me, it’s because they know what zone I’m in. There are things I know how to do, things I don’t. not do. What interests me is to see what we build together and what that also causes. Otherwise, there are things that I would never have done.”

With film music, I am also at the service of a more collective work

“It takes me completely out of my world. I am also at the service of a more collective work. That is to say that it puts his ego in its place. It always takes me out of things, which I use afterwards for my personal projects. It can be models that were not taken, or textures that I like. For me, that’s electronic music. That’s perpetual motion. That’s how it transforms. There is a fine balance to be found which is super interesting when you work with a director.”

A craze for electronic music in the cinema

In recent months, several French DJs have composed film music for the first time, such as Kid Francescoli (Azzuro) or Irène Drésel (A plein temps). Last year, Rone had composed the striking soundtrack of Jacques Audiard’s Olympiades. Chloé Thévenin, for her part, composed two soundtracks this year, Arthur Rambo, and La Montagne, which will be released soon. How can this form of enthusiasm for electro in French cinema be explained?

This also corresponds to an encounter that takes place with a director. I can go as well to compose a piece of techno as to go towards things and rather refined textures. “

“My first feelings of cinema were the Midnight Cinema when I was young, and VHS tapes when I went to rent them on Friday evenings. I was watching things like Blade Runner.

I also later discovered the American cinema of the 70s, this somewhat paranoid cinema of that time. There’s Alan J. Pakula’s Klute. I was a huge Jane Fonda fan. She embodied a “power woman” at a time when there weren’t that many.

I’ve always been fascinated by music through movies

And certainly, I’ve always been fascinated by music through movies. I really like the sound in horror movies. The sound is so insane. That’s why I’m happy that today there is such an interesting place for sound design. I like to work on music with textures that can sometimes be close to sound design.”

The film music composers she loves

“I love Ennio Morricone. It’s a great classic, but let’s say that the westerns also rocked my youth. I love these vocal and harmonica treatments… It’s something that reminds me a bit of Pink Floyd’s The Dark Side of the Moon album. This side a little bit distant, a little evanescent.

I’m a big Carpenter fan too. They are also great references for me. I also really like the work of Mica Levi to speak of a contemporary composer. I think she does a great job especially on the sound.”

Chloé Thévenin is currently working with the Chilean director Fernando Guzzoni for the cinema. On the live performance side, she is working on 2 soundtracks for the Festival d’Avignon

* Thanks to Sacem (Society of Authors, Composers and Music Publishers)