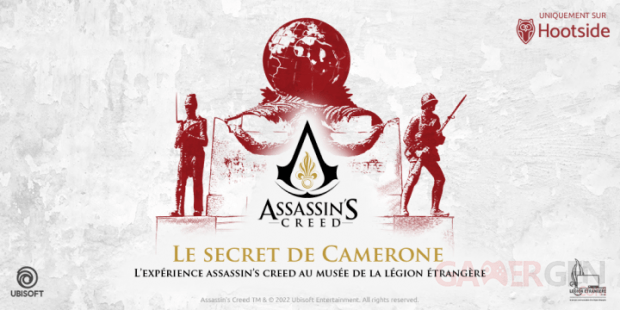 After the success of previous editions, the mobile game Assassin’s Creed: Cameron’s Secret is making a comeback to Aubagne Foreign Legion Museum. For the occasion, a free demo version is also available for iOS and Android devices.

The Battle of Camerone, a feat of arms of the Foreign Legion

On April 30, 1863 in Camerone, Mexico, a foreign legion unit composed of 65 men is ambushed by 2,000 soldiers of the Mexican army. This battle, which really existed, is the starting point of the mobile game Assassin’s Creed: Cameron’s Secret. Thanks to the augmented reality, you will be immersed in the heart of the action and will be called upon to get out of this perilous situation. You will actually have to get your hands on an artifact jealously guarded. To do so, you will have to reconstruct the snippets of memories of your comrades and recover the precious relic. In order to carry out your mission, various augmented reality clues have been disseminated. To achieve your goals, you have, as in the other titles of the saga (including the most recent Assassin’s Creed Valhalla), of the eagle vision. Developped by Hootside in partnership with UbisoftAssassin’s Creed: Cameron’s Secret invites you to fully immerse yourself in the heart of the Aubagne Foreign Legion Museum.

Hootside is a Lille studio specializing in immersive augmented reality experienceswhich draws on historical facts to write scenarios for its video games. Ubisoftfor his part, is no longer to be presented, he who launched, among others, franchise Assassin’s Creed in 2007. The title has made a name for itself by allowing players to immerse themselves in the heart of key moments in history. It was therefore very natural for the two studios to join forces for the release of this Assassin’s Creed: Cameron’s Secret. This mobile game will allow you to live a real historical adventure during your visit to the Aubagne museum. Thanks to your smartphone, you discover all the riches of the places thanks to a unpublished scenario. A automated virtual guide will guide you through the different galleries. You will then have to solve puzzles, scan hidden beacons and interact with a augmented environment with 3D animations. A great way to interest the youngest in history!

The complete adventure from Assassin’s Creed: Cameron’s Secret can be discovered at Aubagne Foreign Legion Museum since the next june 15. This place, located near the command headquarters of this mythical corps of the Army, allows you to immerse yourself in the history of the Legion which today has more than 9,000 volunteers, from more than 140 different nationalities. . After two difficult years in terms of tourism due to Covid restrictions, Assassin’s Creed: Cameron’s Secret is therefore making a comeback. During your visit to the museum, the application is offered at the price of €13.99 (entrance to the museum is free). Note that you also have the option of downloading a free demo playable everywhereon I’App Store and Google Play.