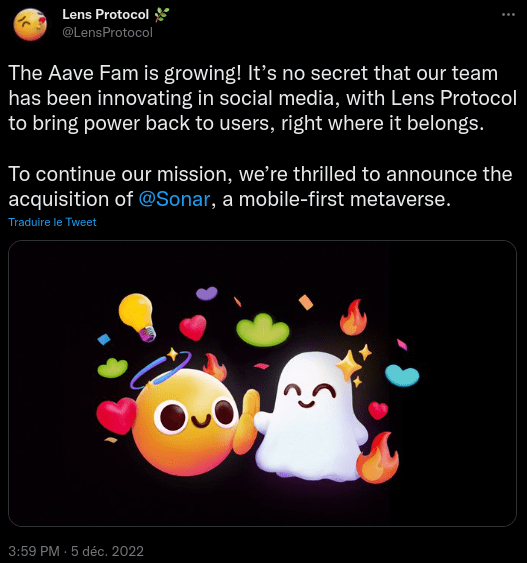 A web 3.0 social network – The democratization of smart contracts has allowed the emergence of many innovations. After taming the decentralized finance (DeFi), these are now used in other fields. In effect, Aave been working for several months on Lens Protocola new kind of decentralized social network.

Aave Company is the company behind the Aave protocol. In addition to developing Aave, it is also working on its decentralized social network project: Lens Protocol. In practice, this protocol is based on the concept of decentralized identity.

It is within the framework of the development of Lens Protocol that Aave Company has announcement the acquisition of the Sonar company :

“The Aave family is growing. It’s no secret that our team broke new ground in social media, with the Lens protocol to put the power back in the hands of users where it belongs. In order to continue our mission, we are delighted to announce the acquisition of Sonar a mobile metaverse. »

Concretely, Sonar offers a social mobile app who supports the NFT as an avatar. Through this acquisition, Aave therefore wishes to take advantage of the know-how of the Sonar teams.

Ben South Lee, a co-founder of Sonar, joins Aave as vice president of product and design. For his part, his brother Randolph Lee becomes a principal engineer at Aave. Together, they will lead a team whose objective will be to develop mobile applications integrating the Lens protocol.

>> Cryptos for your first NFTs, it’s on eToro (commercial link)<<

Lens: the revival of social networks

Lens Protocol was presented in February 2022 by the Aave teams. This new kind of protocol aims to create a social network fully decentralized. NFTs are ubiquitous, via profile photos or publications. Finally, two months after this announcement, the Lens protocol has been deployed on the Polygon network. For this first version, the Aave teams opted for a closed beta.

In 6 months of existence, the protocol counts more than 105,000 different profiles. These profiles achieved a total of 7.8 million transactions on the app. With the acquisition of Sonar, Aave wants to democratize its social network through optimized use for mobile.

For its part, the governance of Aave has voted several measures aimed at strengthening the security of the protocol. In effect, the markets of several overly volatile and illiquid assets have been put on hold. This decision follows the attempted attack by the Mango Markets hacker.

You have the right to understand nothing about the NFT trend. On the other hand, not being interested in Bitcoin is unforgivable! Don’t wait any longer to prepare for the future. Register now on the eToro platform (commercial link).

Aave buys Sonar: the Lens social network soon to be democratized thanks to mobile?