The Apple M2 chip is coming! Shown at WWDC earlier this month, it equips the new 13.3″ MacBook Pro and the all-new MacBook Air with a redesigned design. Both machines were announced at the same time, but the 13.3″ MacBook Pro will be available first: after the launch of pre-orders last Friday, the first copies will arrive at their owners this Friday, June 24th. In the meantime, Apple has sent a few test copies to some journalists, including The Verge who carried out multiple tests to see what the new M2 chip had in its belly.

Most of the test bench carried out by our colleagues can be found in the following comparative tables, which show the results of various benchmarks carried out on the MacBook Pro 13.3 “with M2 chip compared to those of the MacBook Pro 13.3 “with M1 chip but also those of the 14.2” MacBook Pro with M1 Pro chip. Unsurprisingly, the M2 chip does better than the M1 chip on almost all workstations (with the strange exception of exporting in 4K under Premiere), especially the graphics where the difference is most noticeable on a daily basis, on a video game for example. The M2 chip even tickles the M1 Pro chip of the higher models on certain results in single-core, but it is far behind in multi-core . 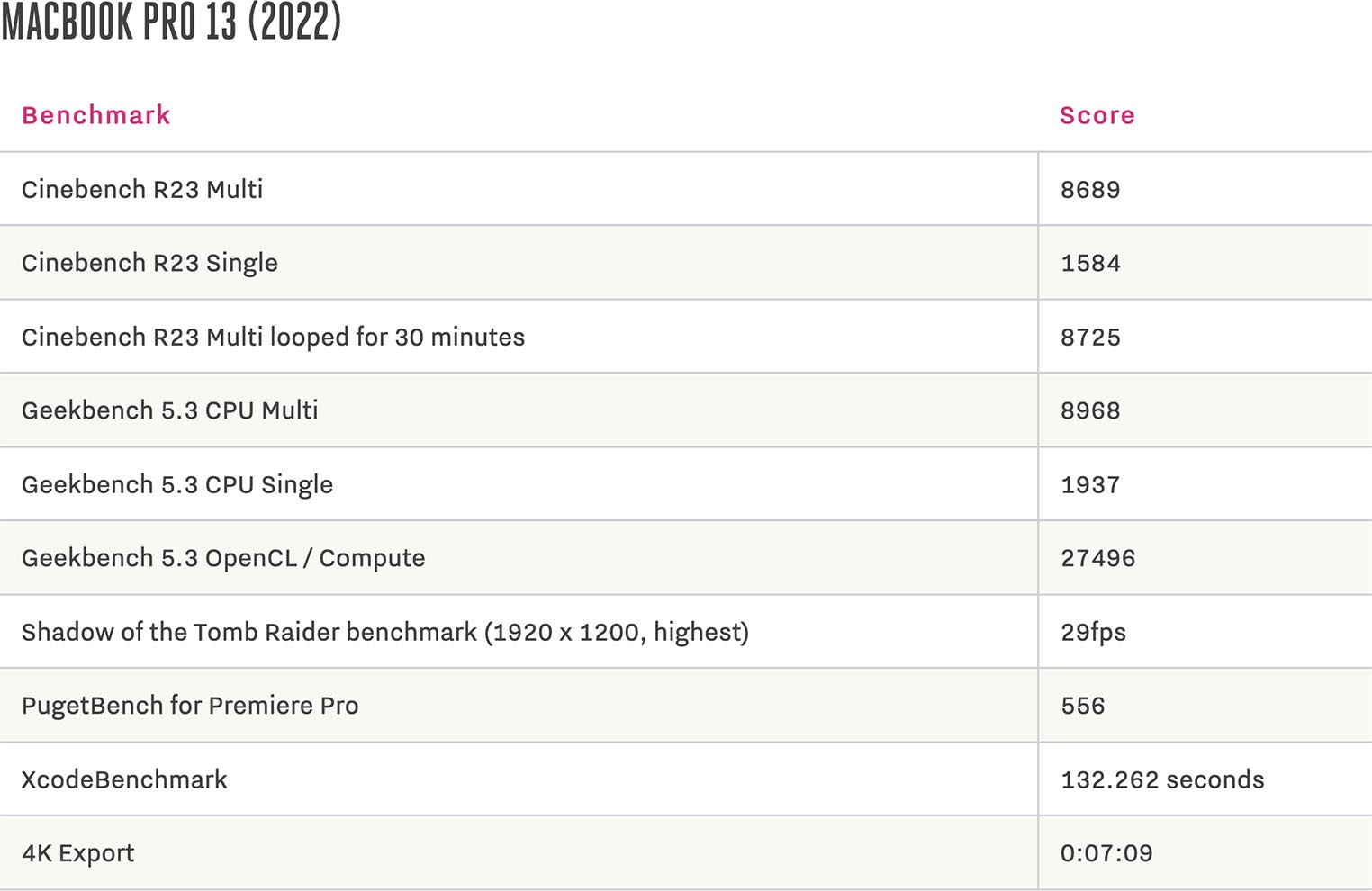 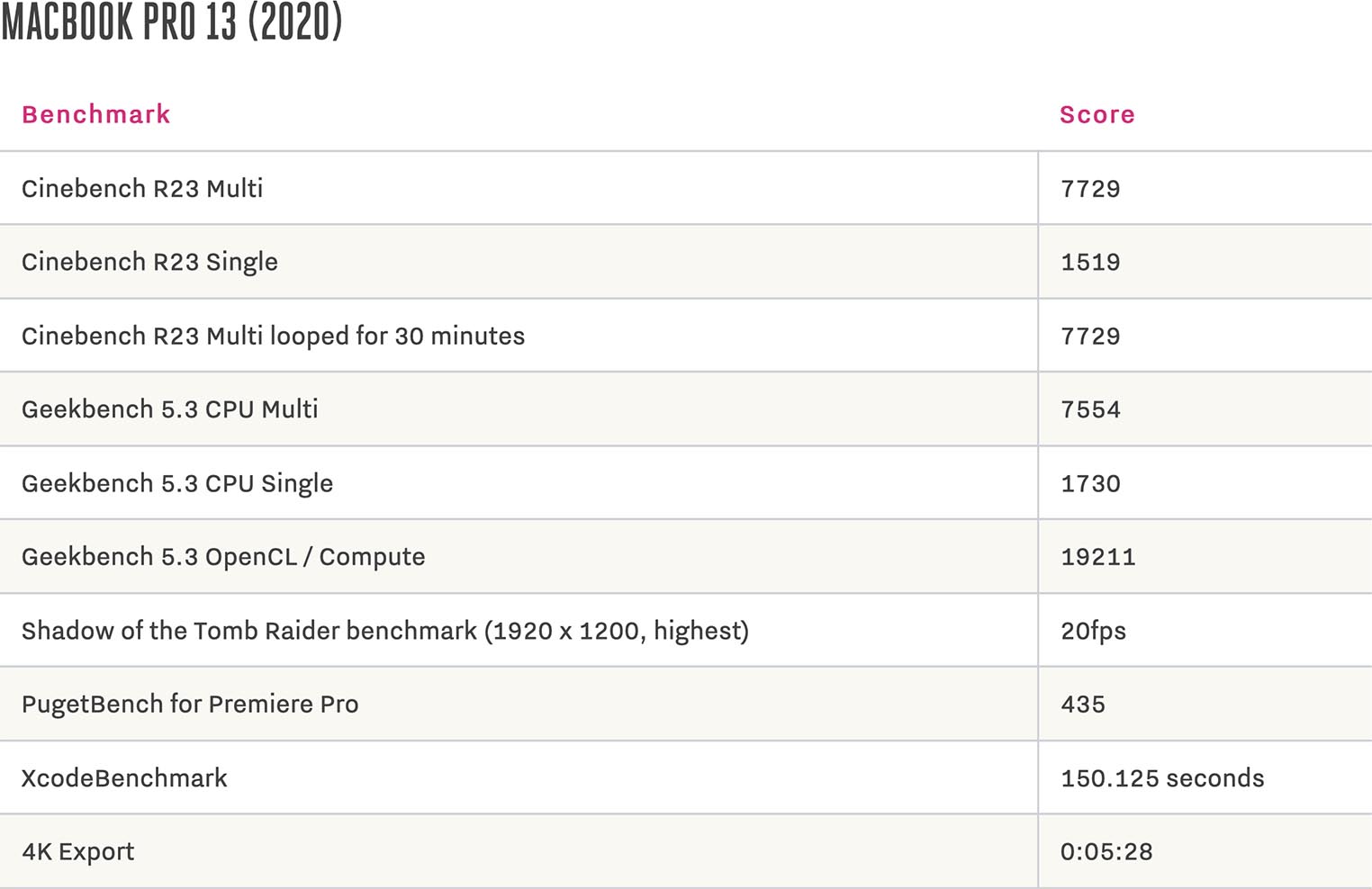 The MacBook Pro M2 is the faster MacBook Pro M1 and that’s it. Is this increase in performance enough to restore relevance to this model? We have already asked this question and our colleagues are asking it too. On the one hand, there will soon be the new MacBook Air which will also integrate the M2 chip with other interesting developments for a more contained price. On the other hand, the 14.2″ MacBook Pro offers professionals even more power and above all much higher-end equipment, for an additional cost that remains very reasonable at the same level of storage and RAM. And for those who always want more, Apple is of course preparing the M2 Pro and M2 Max chips which will be found on the next 14.2″ and 16.2″ MacBook Pro late 2022 or early 2023and the good performance of the classic M2 chip is therefore very promising in this regard.

For those who are hesitating between a 13.3″ MacBook Pro and a MacBook Air, it is in any case advisable to wait for the first tests of the MacBook Air M2 which will be released during the month of July. Fanless, this model should much less support the increase in load over time, but it remains to be seen to what extent this will affect (or not) intensive everyday tasks. Because if the MacBook Pro 13.3 “keeps the advantage of autonomy (up to at 8 p.m.), the MacBook Air should defend itself rather well (Apple announces until 6 p.m.) while presenting significant advantages (lightness, total silence, larger screen, better webcam, MagSafe connector) and giving up on the Touch Bar which is now on a siding. So at 100 € less…

Links not appearing? Images are missing? Your ad blocker is playing tricks on you.
To view all of our content, please turn off your ad blocker!