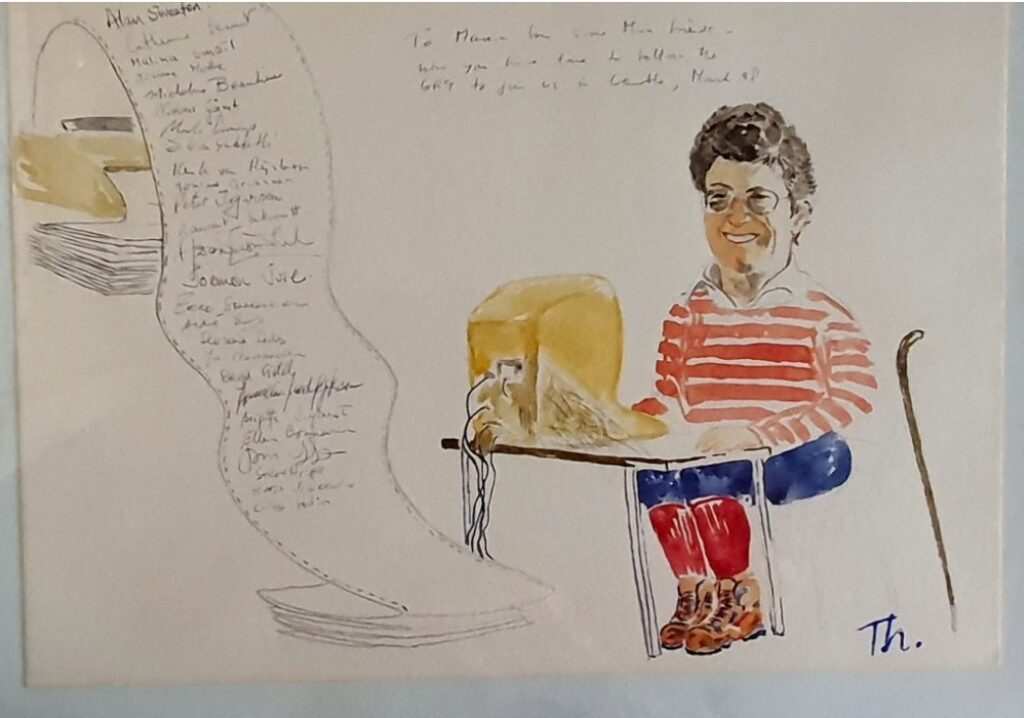 Marion Créhange is the first person to have written a thesis in computer science, in France, in 1961. We have plunged into her biographical journey, with the support of testimonies, to draw you the portrait of a pioneering woman, who died in March 2022.

Natacha Portier then talks about it around her, but few people remember this name. At the same time, she also discovered that her Wikipedia page had been created and then deleted, for lack of secondary sources (for example, press articles) proving her notoriety. ” She’s a college professor. Nothing too exciting ”, mentioned the notification of deletion. Even today, the eligibility of the page is ” debated “. However, Marion Créhange is historically a computer pioneer, a figurehead in his field and a notable personality. His thesis, titled Programming language structure “, has laid important foundations.

” The computer was not yet invented, but its goal was to create a language that would allow programming. She wanted to develop languages ​​that could be easily used by her scientific colleagues. », explains Natacha Portier. Born in 1937, Marion Créhange died on March 28, 2022.

“It’s someone who scored”

Marion Créhange began her career at the age of 22, in 1959, recruited as an assistant at the Faculty of Sciences of Nancy, by Professor Jean Legras, in order to deepen the “calculation machines” (the future computers). It was barely two years later, in 1961, that she wrote her doctoral thesis – the first in France dedicated to computer science. She then became professor emeritus at the University of Lorraine. In her research, after programming languages, she focuses on the human-machine interface, creating EXPRESS in the 1980s, a research group aimed to develop interaction mechanisms to help users query an image database.

In 2019, during a speechMarion Créhange detailed an example, whose innovative character for the 1980s can be seen: “ This involved, for example, helping a journalist to illustrate an article. This journalist made a first request and the system offered him a set of images. In the essential relevance looping phase, the journalist indicated to the system which images were relevant and which were not at all. And the system deduced a better understanding of the journalist’s needs. And so on, this cycle obviously being a system learning cycle. And besides, jointly… from the journalist. »

She also collaborated with historian Lucie Fossier by applying computer automation to the classification of medieval diplomatic sources.

Alongside her contributions to IT, Marion Créhange was a teacher for several decades. With Numerama, one of his former students, in the 1990s, Catherine*, said to herself ” moved at the announcement of his death. There are few teachers she remembers, but when Marion Créhange’s name came out on Twitter (thanks to a tweet from Isabelle Collet), it made him click immediately.

” It’s someone who marked », confides Catherine, who mentions having kept a « positive memory from his teacher. Marion Créhange was particularly loved and respected: “ she had a certain aura “, recalls his former student, “ she appeared as a character “. She continues: “ I remember that he was a good, human person. She discussed our results with us, even face to face, she took the time. His classes were good! “One of his promo colleagues, who also had Marion Créhange, keeps the same memory. She recalls that the relationship with the students was so good that everyone called her by her first name — Marion.

Marion Créhange was a notable character

Marion Créhange was part of the Académie de Stanislas, a learned society. Contacted by Numerama, the academy confirms that she returned there on November 21, 2003; before being appointed full member on February 3, 2017. Upon her tenure (incidentally relayed in The Republican East), she gave a speech titled “ Teaching by doing: the learning of the first men to the learning of computers “.

In his response speechthe president of the academy at the time publicly described Marion Créhange as a ” pioneer of IT, adding: ” What is most remarkable about this activity is undoubtedly the concern for interdisciplinarity that is evident in it. Far from occupying a narrow niche, you work with colleagues from the three Nancy establishments and the CNRS. This is not without providing you with enviable visibility in regional scientific circles. »

With Numerama, the perpetual secretary of the academy, Pierre Labrude recalls that ” when you enter an academy, it’s not only for a good professional career, but also because you have a reputation in a field “. Marion Créhange was not only a member, but a holder. However, Pierre Labrude tells us, “ we only establish the corresponding partners whose particular merit is considered by reputation, humanity, communications, assiduity », Which was what Marion Créhange corresponded to.

Pierre Labrude also remembers someone very cultured in multiple fields. ” She was part of our commissions in literature and music, where she had very relevant opinions. »

“Women are not discovering IT, they were there from the start”

It is only thanks to a strong mobilization on social networks, launched by Natacha Portier and Isabelle Collet that Marion Créhange’s Wikipedia page was able to be recreated in the spring of 2022. But why did such an important woman originally see her page deleted? for a lack of notoriety – however unjustified?

” It’s harder for a woman to be recognized », Regrets computer science teacher Natacha Portier. However, women have contributed to the entire history of computing. The first “computer” is assigned to Ada Lovelace, in the 19th century. In 1951, it was Grace Hopper who wrote the first compiler — support for transforming code into an object. And where Marion Créhange was the first to write a computer thesis in France, it was also a woman, Mary Keller, who wrote the first in the United States.

” Women are not discovering computers, they were there from the start “reminds us Natacha Portier. ” Computer science was a very feminine field in the beginning. ” But itthis is no longer the case these days “, and this situation has been going on for a few decades now. Catherine, a former student of Marion Créhange, remembers that they were less than 10 girls out of a class of 200 people, in the early 1990s. The women of my generation, we are not numerous. And it hasn’t changed much, companies are struggling to recruit women in IT. »

Rehabilitating models like Marion Créhange, women who have contributed to the history of computing in France and who have distinguished themselves in their field, is therefore of particular importance.

A few months before her death, at the instigation of colleagues from the computer world, Marion Créhange published, in the journal Interstices, his memoirs. She describes her journey as a ” hiking ” computer science. ” I am very impressed, now, to have participated in a historical evolution… and not to have fully realized it! “, she concludes.

*The name of this testimonial has been changed.