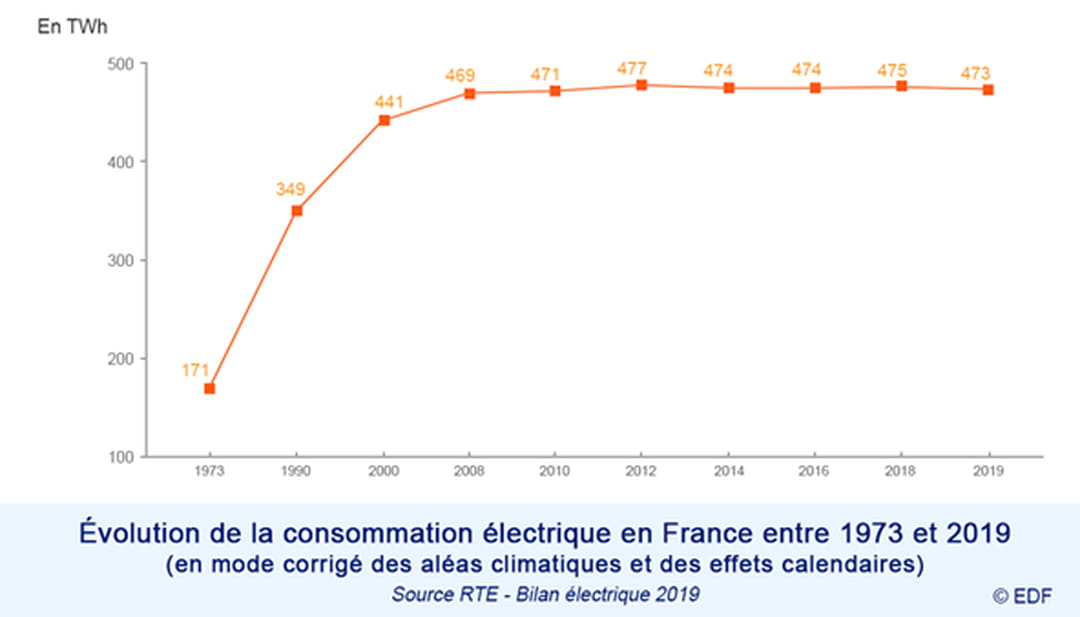 In 5 years, the Internet has tripled its share in global electricity consumption, rising from 7% to 20%. While the GAFAMs, the operators, the States promise to combine growth and sobriety, is this realistic?

In 5 years, the Internet has tripled its global electricity consumption, rising from 7% to 20%. While the GAFAMs, the operators, the States promise to combine growth and sobriety, is this realistic?

ADEME, CNRS, Greenpeace say that digital (mobiles, computers, datacenters, networks) is the world’s leading electricity consumer, a 6th continent that continues to devour the rest of the world. Without concrete progress for energy control, will digital become a historical nonsense?

Since 1974 the major world powers have tripled their electricity consumption, the IEA noting an increase of 423.60% (9.41% per year). So the recent arrival of the Internet does not explain everything: electricity is the engine of the modern, industrial and domestic economy.

In France, the effect of deindustrialization, electricity consumption has stabilized for 10 years, and faced with the reduction in industrial and domestic electricity demand (heating, household appliances), digital technology has doubled, representing 12% of electricity in France (56TWh ). The transformation is underway: digital already accounted for 5.5% of French GDP in 2015.

The global network, what cost?

In 5 years, digital has doubled its energy consumption, rising from 5 to 20% and the bill could increase further with newcomers such as the blockchain, whose Bitcoin alone represents at least 90 TWh, and the generalization of digital currency will accentuate the trend.

The announced progress of Web 3.0, a mix of blockchain and metaverse, the progress of 5G, are the Eldorado of digital players and the happiness promised to the consumer, but they also risk significantly increasing global energy expenditure.

Computing and the global Internet network form a super-complex of energy-intensive technologies that were not initially designed to meet the rules of sobriety. Personally, I will never accept the term progress if it announces uncertain days for our planet.

Planting trees, selling CO2 quotas, getting around by bike, everything will be derisory if no progress is made to quickly control the digital bill. Time matters.

The GAFAMs, what an example?

Will web leaders be blamed for their responsibility in the deterioration of our environment? This question of environmental damage, in the face of billions of tax optimization, will it be asked?

Carboniferous food, overconsumption of water: Microsoft, Amazon, Facebook will have had a lasting impact on the environment, right up to Microsoft’s dystopian underwater data center project which seems to disregard small fish, a habit no doubt (…)

But the “palm” goes to Google with its pure YouTube player which is “pure” only in name since simple rules would reduce this planetary energy waste: allowing content to be played in audio mode, for example, would greatly reduce consumption network, storage, user battery.

The leaders of the digital market will have to innovate in this direction to remain credible.

Undoubtedly, technical advances should make it possible to rationalize telephone networks. In this context, the European Ericsson, with its new generation of mobile network equipment, is committed to reducing energy expenditure by 50% and gaining 60% in capacity. (12)

But in its forward-looking analysis, Ericsson exposes that, without a new approach, 5G will further increase energy consumption, committing to zero carbon by 2040. And the promise of “breaking the rising curve” remains a distant, even uncertain goal.

In the immediate future, the operators are writing to their customers, encouraging them to connect their phones to WiFi rather than 3/4G, and to turn off the WiFi in their absence. In the end, the user will download his phone faster and will have to manage the wifi which would have deserved a better design.

In the end, it is the consumer and the environment who will foot the bill that is not about to go green.

IT sobriety: an oxymoron?