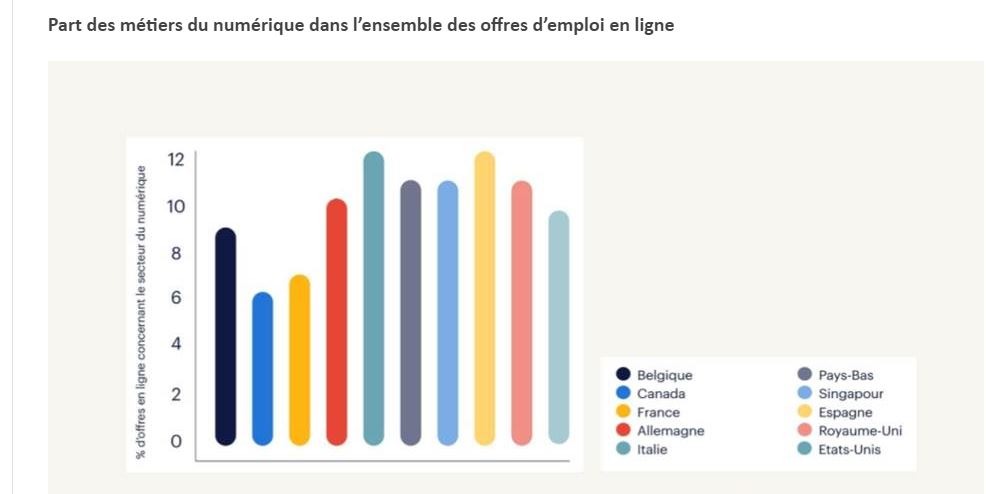 Job vacancies in the digital sector continue to grow in Europe, the United States and Asia, according to a report by the Organization for Economic Co-operation and Development (OECD) and HR specialist Randstad. In France, they have increased by 66% in 4 years, with demand mainly focused on developer, IT administrator and data analyst profiles.

Most analysts agree in emphasizing the good health of the job market for IT specialists. This is also one of the key points of the latest report from the Organization for Economic Co-operation and Development (OECD) with the help of HR specialist Randstad. This study, titled “Skills for the Digital Transition: Assessing Recent Trends Using Big Data,” uses artificial intelligence and machine learning techniques to analyze the information contained in 417 million job postings posted online. The period studied covers the last 10 years, in France and in 10 countries in Europe, North America and Asia (Germany, Belgium, Canada, Spain, United States, Italy, Netherlands, United Kingdom and Singapore). The results show that companies’ needs for IT profiles continue to grow. In France, this demand has increased by 66% over the last four years. At the same time, in France, 7% of jobs published online concern digital professions, a level slightly lower than that of the other European countries analyzed.

As for the most sought-after specialties, the prize once again goes to code professionals in several countries around the world. In Germany and France, the share of online job vacancies for software developers is 37% and 36% respectively. In the United Kingdom, two out of three online advertisements for digital professions are aimed at experts in computer languages. The latter alongside software engineers are also very popular in Canada, Singapore and Spain and account for almost 50% of IT job openings. This is followed by IT/data administrators and analysts weighing one-fifth of the digital professions in all the offers analyzed. In France, they are mentioned in almost a third of specialized advertisements.

In France, the share occupied by digital professions is slightly lower than the European average. (Source: OECD/Randstad/Image credit OECD/Randstad)

Disparities according to qualification levels

Since ICT technicians and data entry operators are essential to the smooth running of IT infrastructures, they too are in high demand, especially as countries and companies have begun their transition to a fully digital environment. But for this category, the long-term outlook is potentially negative, because the positions corresponding to these trades are more repetitive in nature and are less qualified. Thus, they are present in less than 20% of online job offers, a percentage that even drops to 7% in France and Germany. Conversely, in the four English-speaking countries taken into account in the report (Canada, United States, United Kingdom and Singapore), the OECD and Randstad have observed a sharp rise in the number of vacancies for specialists in highly skilled digital. Among them, we find the positions of director of information systems, of IT manager. 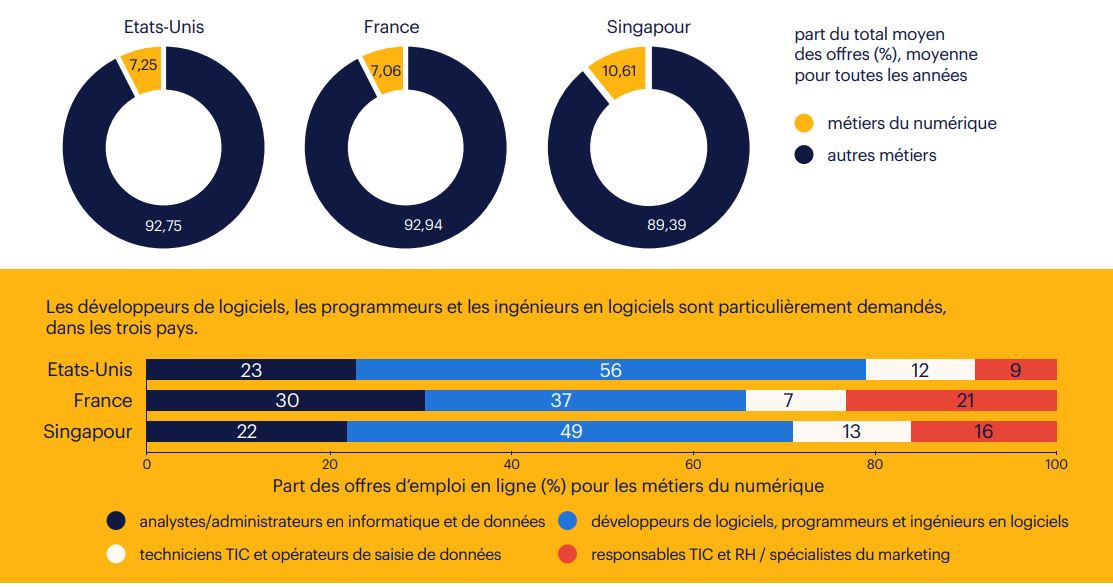 At the same time, the OECD/Randstad report shows that over the last ten years, the demand for digital skills has spread to different occupations and sectors faster than the demand for other categories. Among the fields that have spread the fastest in the labor market, the study identifies five: data analysis (big data, AI, machine learning, etc.), cybersecurity, programming, automation and the Internet of Things (IoT) and finally, the analytical know-how related to e-commerce as well as the management of social networks. The report also establishes a list of digital skills for which demand has greatly accelerated in four years on the job market in the countries of the European Union.

Knowledge around Ubuntu, an open source operating system based on Linux technology, is among the fastest spreading in EU countries, with first place in France, Belgium and the Netherlands. Down. Mastery of JavaScript, a programming language mainly used in interactive web pages, is particularly sought after in France, Germany and the Netherlands. CSS (Cascading Style Sheets), another computer language popular with web developers, is also one of the most demanded qualifications in France in online job offers.

Encourage the learning of future skills

In the IT sector, several other specialties are also highly sought after in EU countries. These are ERP profiles with an increase in demand in Belgium, Germany and Italy. In France, advertisements related to CRM experienced a strong acceleration in online job offers. As the digitalization of the global economy accelerates, skills in science, technology, engineering and mathematics (STEM) will become even more essential, predict the OECD and Randsadt in this survey.

For Frank Ribuot, president of the Randstad France group, “companies and public authorities must work hand in hand to identify as quickly as possible the professions strongly impacted by digital technology and then proactively support employees in updating their skills. to enable them to remain employable in an extremely dynamic market”. Stefano Scarpetta, director of employment, labor and social affairs at the OECD, concluded: “Big data allows us to take the pulse of the labor market and help policy makers design programs of training and retraining which provide better employment opportunities for all”.