IT jobs 2021: trends and fads
New professions and technologies on the labor market

Job postings are a great source of labor market information. In addition to languages, databases and salaries, they also give clues about current trends. For example, technologies are sometimes fad, fad that can eventually pass. Sometimes they are even simple names given to things that already existed, but fashion decides that a new dedicated term would be better. But most often, these are changing needs, depending on new technologies, or external events, such as pandemics and indirectly new working methods, in particular the much more massive use of teleworking than before. This study takes place one year after the start of a pandemic that it is useless to present, and its consequences on the labor market.

This is the purpose of this study, based on the offers of the Job Portal from 2013 to 2021 and to discover the trends and their evolution. Let’s start by looking at the main trends with the most frequently encountered fashionable terms, between 2013 and 2021: 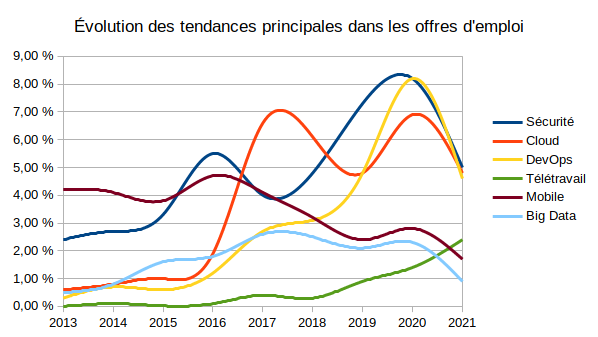 The six terms chosen here are known to almost everyone, more or less perfectly of course depending on the technical knowledge of your interlocutor.

The evolution here, however, seems to conform to the trends that can be observed from sources other than job offers, in particular computer news.

So the telework, although not a new term, was virtually never mentioned in job advertisements before 2017, but started to become a bit more fashionable in 2018 and 2019, as this modern work technique was born. did not wait for any coronavirus to exist. But the famous virus has made the term really popular with a surge in 2020, and which has not weakened, quite the contrary, in 2021.

the cloud is also a term that was rarely mentioned in job postings before 2017, but saw a dramatic rise that year. A second peak, at the same level as 2017, is also observed in 2020, coinciding with a high need during these periods of confinement.

the big data originally seemed to have a bright future, given the mass of information that social networks brew, and in general, everything that can be present on the Internet. But the growth stopped in 2019, and in free fall in 2021. Indeed, since the GDPR on the one hand, the Cambridge Analytica scandal on the other hand and in general a growing mistrust among Internet users, the Big Data is perhaps seen more as a nuisance or some kind of annoyance than a strength. Lately, Google Analytics, a huge source of data aspiration, will even change its code to collect much less information. Yes clearly, Big Data, although still useful, has gone out of fashion by force of circumstance.

The term DevOps, a term designating, roughly speaking, a computer scientist mastering the entire chain of its applications, was an almost unknown term in 2013, and has experienced rapid growth. Its decline in 2021 is curious, this will be monitored for the next few years. 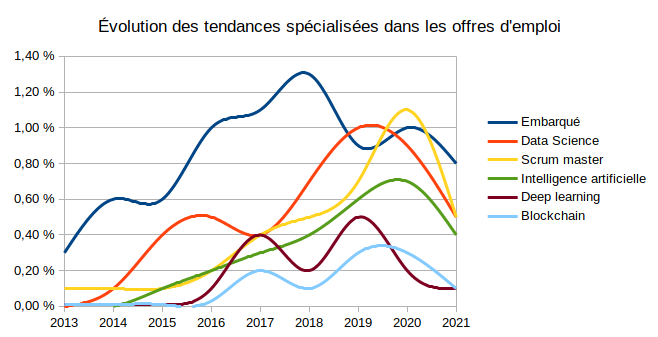 development embarked has always existed. This is a very important branch of specialized computer development. Number 1 in 2013, its supremacy in specialist trends was once threatened by more fashionable modern notions, but in 2021 it is back to its well-deserved top spot.

About these famous fashion trends, we find in particular the blockchain. Technology invented within the framework of the Bitcoin cryptocurrency, many companies have tried to find a concrete application of this technology outside the framework of cryptocurrencies. Alas, looking for a use, and therefore a need, for an existing technology seems to be a counterproductive way of thinking. Adding to this environmental considerations and the scarcity of energy sources, it is not surprising to see its demand in sharp decline after a peak in 2020.

Two other terms have been very fashionable in recent years, these are theArtificial intelligence and deep learning (deep learning). More concrete than blockchain, these technical solutions tend to be offered to solve a wide range of logistical problems. But hey, AI obviously isn’t everything, these terms are also down after a peak in 2020.

The data science, strongly associated with Big Data, experienced a very strong peak in 2019, and has since experienced a significant drop. The reasons are probably the same as for Big Data: Cambridge Analytica, the GDPR and the awareness of some Internet users.

Now, let’s take a look at the trends in specialized web development terms.

In 2013, we commonly talked about web developer, which was the fashionable term at the time, number 1, clipping the old terms of Webmaster and Webdesigner. But already at the time, we knew that some people were more gifted in server treatment, the famous Back Endwhile others rather excelled in appearance and customer-side treatment, the Front End. The term of Full Stack was at that time non-existent.

In 2021, everything has changed. Yes Front End and Back End are always in high demand, respectively third and second in demand, the term of Full Stack, accurately designating developers who master both fronts, is the clear majority term, and has since 2019. While Web Developer is still used, a solid fourth place, this term, imprecise on the skills currently in demand, is in free fall. Finally, Webmaster and Webdesigner are outdated terms, which have logically become completely non-existent.

In explicit requests in the operating system, linux is number 1 over the entire period, even if Windows, eternal number 2, almost stole its place in 2019. This should not necessarily be seen as a domination of the one-armed system, but probably more an assumed knowledge of Windows leading to less explicit mention of the system, even if this assumes knowledge ” innate” must be less and less true, at least for the average user, with the generalization of mobile devices such as telephones, tablets and Chromebooks, where Windows is most of the time absent. Of course, the situation is not the same for an IT professional working on a computer.

The other interesting aspect of this chart is the fact that all of these explicit mentions are down. This may be explained by work that is less focused or less specific to these different systems and a real boom in multi-platform, where the end customer can access the software regardless of their device.