In fear of a global recession in 2023, in 2022 large-scale workforce reduction plans followed one another in companies in the technology sector. According to the Layoffs.fyi platform, 153,160 IT employees were made redundant last year, a figure 10 times higher than in 2021.

While the pandemic had initially benefited the digital sector, the uncertainties linked to the economic crisis ended up leading companies in the IT sector to make massive layoffs in 2022. Proof of this haemorrhage of the IT workforce, the results published on the platform Layoffs.fyi, which tracks corporate social movements across dozens of industries. Quoted by our brother SiliconAngle, data shows that 153,160 digital sector employees lost their jobs in 2022. This means that more than 50% of the positions cut since the start of the pandemic took place in the last 12 months. What’s more, this figure is about 10 times higher than in 2021. It is an alarming signal that shows how real the fear created by the current global economic slowdown is, and it is also a stark reminder of the panic that followed the first days of the Covid-19 epidemic. A period during which more than 70,000 IT workers lost their jobs between March and December 2020.

Layoffs in the IT sector rose sharply between May and December 2022. (Source Layoffs.fyi/Image credit: Layoffs.fyi)

Volumes far from the 2001 peak

Despite everything, in IT, the number of redundancies recorded in 2022 is much lower than the volumes reached in 2001, which remains the worst year of all for companies in the sector. It was at that time more than 2 million unemployed after the bursting of the Internet bubble, according to the Silicon Valley Business Journal. For technology companies, the most active employers in 2022 were Amazon and Meta who alone laid off 21,000 people throughout the year. Just arrived, the new general manager and owner from Twitter Elon Musk also made a name for himself by thanking 3,700 employees. Not to mention the restructuring announced by other digital players, such as the tourist reservation site Booking or the network equipment manufacturer Cisco Systems with 4,375 and 4,100 job cuts respectively. 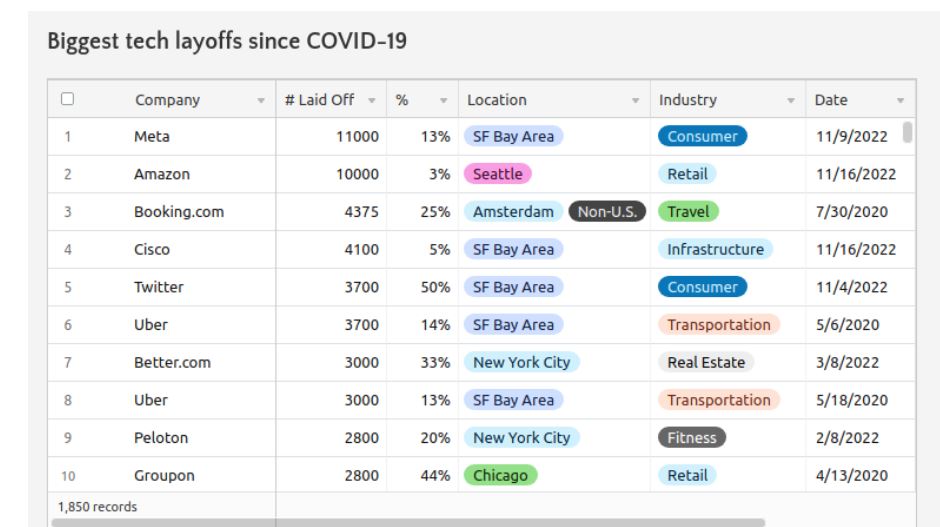 Meta and Amazon peak as the tech companies that laid off the most in 2022. (Source Layoffs.fyi/Image credit: Layoffs.fyi)

In total, the Layoffs.fyi database shows that 1,172 IT players downsized last year. It should be noted, however, that the data collected are estimates based on press articles and company announcements. The published figures, however, illustrate how quickly things have changed in the digital realm. At first quarter of 2022, less than 10,000 workforce reductions had been reported across the entire IT industry. However, that figure was expected to double in May, then quickly accelerated through the rest of the year. However, a positive note emerges from this heavy social climate, According to the wall street journalwhich was the first to learn of this data, at least 79% of laid-off IT professionals found a new job within three months of losing their position.