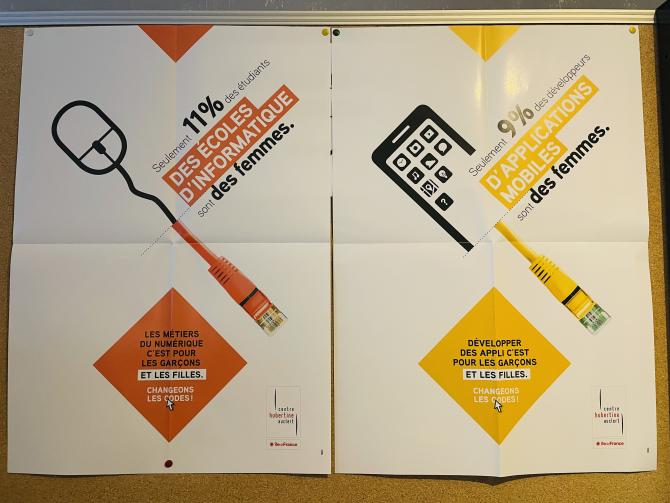 “At a time when the world is accelerating its digital expansion through more or less chosen changes, girls should no longer be the “left behind” tremendous professional opportunities that this represents”says Marie-Pierre Badré, President of the Center Hubertine Auclert, during the restitution to the Lycée Léonard de Vinci (92) of an unpublished study carried out over three years by the Phare Agency in five high schools in the Ile-de-France region. The mission of this study was to understand why girls desert the IT and digital sectors.

Because it is from school that everything is played.

However, it is clear that in high school, only 2.5% of girls choose the new Digital and Computer Science (NSI) teaching in first class, against 15% of boys, and that in terminale, 1% of they kept this teaching against 7% of the boys. In graduate school, only 11% of computer school students are women. Equality is therefore still far from being achieved, nor is diversity.

Generally, “we noticed a lack of interest in IT on the part of the high school students interviewed”highlights the sociologist Manon Réguer-Petit, scientific director of the Phare Agency who carried out the study. It is indeed not because we are surrounded by digital tools on a daily basis that we feel comfortable there or that we want to project ourselves in this field.

Especially since the image of the geek is still a “foil” for girls, as for boys, the latter not really seeing it as a model of virility. Nevertheless, films, series and the media have further popularized the figure of the hacker. In its list of “most famous hackers” (published in 2014), the site hitek.fr profiles eight men, including Kevin Mitnick and Julian Assange. The article does not mention any women. 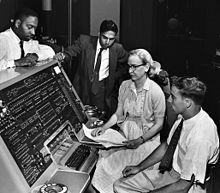 Let’s mention one: the computer scientist and American lieutenant Grace Hopper. “The term of bug, in computing, came out of his imagination, that is to say!”says social media specialist and teacher at Sciences Po, Fabrice Epelboin in his article “Where are the hackers?” (frenchweb.fr, 2016).

From the very beginning, women have invested in the field of computing. From Ada Lovelace to Anita Borg, passing by Hedy Lamarr or Margaret Hamilton, the pioneers bequeathed to us the first computer programs, landing on the Moon, Wi-Fi and GPS. According to Isabelle Collet, author of the book Computer Forgotten (ed. Le Passeur, 2019), between 1972 and 1985, the proportion of women in the field was even higher than that of all engineering schools.

So why such a reversal? Fabrice Epelboin points his mouse towards marketing which, from the 1980s and the arrival of computers in homes, targets more men and boys, effectively excluding women.

And thanks to the magic of Twitter and female journalists and computer scientists on the spot: Who was Marion Créhange, the first person to obtain a doctorate in computer science in France? @lessanspagEs to you !!! https://t.co/i8I2MUIrxj

“High school is not a neutral place”

Forty years later, the situation has improved with regard to girls’ access to computers, but obstacles persist, particularly within the education system. “Certainly, gender inequalities are produced in society, family, etc. Nevertheless, one of our conclusions is that high school is not a neutral place”notes Manon Réguer-Petit before specifying: “The educational teams we surveyed tend to make sexist behavior invisible, often associating it with what would be a lack of maturity on the part of boys.”

The gender stereotypes carried by the educational teams have an impact on the students’ career choices.
Marianne Monfort, sociologist

Another highlight: “The gender stereotypes carried by the educational teams impact the orientation choices of the pupils”, adds Marianne Monfort, sociologist, researcher at Agence Phare and co-author of this study. During a high school orientation session, sociologists observe that a teacher points out the pressure and the difficulty of becoming an astronaut to a young girl, but does not do so for a high school student who aspires to become director of the International Monetary Fund . “Often brought back to their gender by the educational teams, the high school girls we followed for three years tended to head for so-called “feminine”. A compliance process rarely questioned by the hierarchy”, reports the survey.

The same goes for the few high school girls enrolled in digital education and computer science. “The first time I walked into the room, I said to myself “but in fact we are not many girls” […] It’s weird that there are so many boys. And then I said to myself “well it doesn’t matter, it’s that one year, I do what I have to do and I don’t need to be friends with them”, testifies Amel, first-grade student, in 2020.

All this put together, the girls find themselves in difficulty, develop the growing impression that they are incompetent and doubt the choice they made at the start.
Hubertine Auclert study, 2022

However, being in the minority has consequences: “Girls are excluded from the dynamics of exchange and mutual aid that take place between boys”, note sociologists. A phenomenon that weighs on their ability to succeed in the exercises. “All of this put together, the girls find themselves in difficulty, develop the growing impression that they are incompetent and doubt the choice they made at the start. Especially since the reaction of the teachers is often the same: “If the girls doubt, it’s because they are not made for the NSI”. 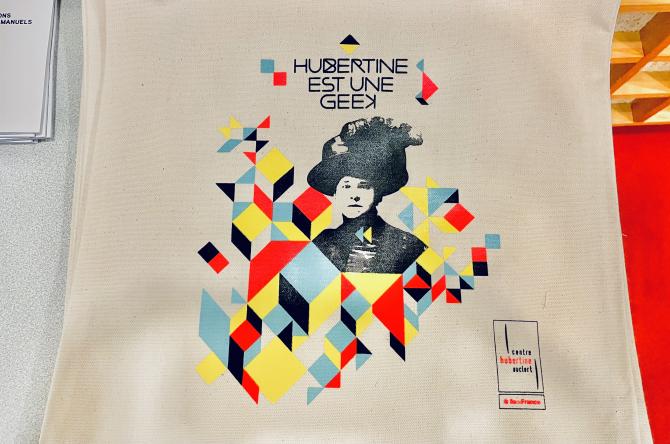 “Nevertheless, we must not standardize these educational teams too quickly”, warns Manon Réguer-Petit. If some teachers adhere to this unequal vision, others are indifferent to it, finally a third group is aware of it. “but feels rather helpless to deal with it”. In conclusion of their study, the sociologists therefore established, with the Center Hubertine Auclert, a series of recommendations such as strengthening the training of staff on the issues of sexism and supporting associations which act in favor of girls’ access to digital technology.

Among these associations, Women and Mathematics which, each year, intervenes in high schools to encourage girls to project themselves and offer them accessible role models.

Another initiative, that of Becomtech who offers the “Jump in tech” program: “This is free school-based training for girls in 3rd and 2nd grades, pivotal classes. The challenge: arouse their curiosity, develop their computer skills and believe in their abilities”explains Dorothée Roch, its founder.

If computer and digital tools are supposed to benefit the greatest number, it would be good if a diversity of people made up these sectors.
Jelena Djordjevic, FACE Education Manager

The Wigirls project is aimed at young girls from working-class backgrounds. “If IT and digital tools are supposed to benefit the greatest number, it would be good if a diversity of people made up these sectors”insists Jelena Djordjevic, Education Manager at the Action Against Exclusion Foundation Club (FACE) 93 which carries the projects Wifilles and D’clique for girls and boys interested in these fields. “Gender, in Seine-Saint-Denis, is not the main obstacle to accessing these sectors, it is also the very fact of being from this department. For this reason, we have created this mixed program. “

All the recommendations of the study are complementary to the action plan proposed in the report “Making equality between girls and boys a new stage in the implementation of the 21st century high school”, submitted to the Minister of National Education , in July 2021.

However, for them to be implemented, “we must ensure that the decisions taken at the highest levels are indeed in favor of the fight against gender inequalities”, emphasizes Manon Réguer-Petit. However, the political context in which the study takes place proves that this issue still does not achieve consensus: the high school reform implemented in 2019 is presented as favoring a “baccalaureate-equality” “without mentioning gender equality” ; National Education banned inclusive writing in May 2021; finally, in September 2020, the controversy surrounding the “republican outfit” focused on the clothing of high school girls as a source of distraction and a risk factor for sexual assault.

Isn’t it time to change the codes?

IT and digital, still “men’s domains”?