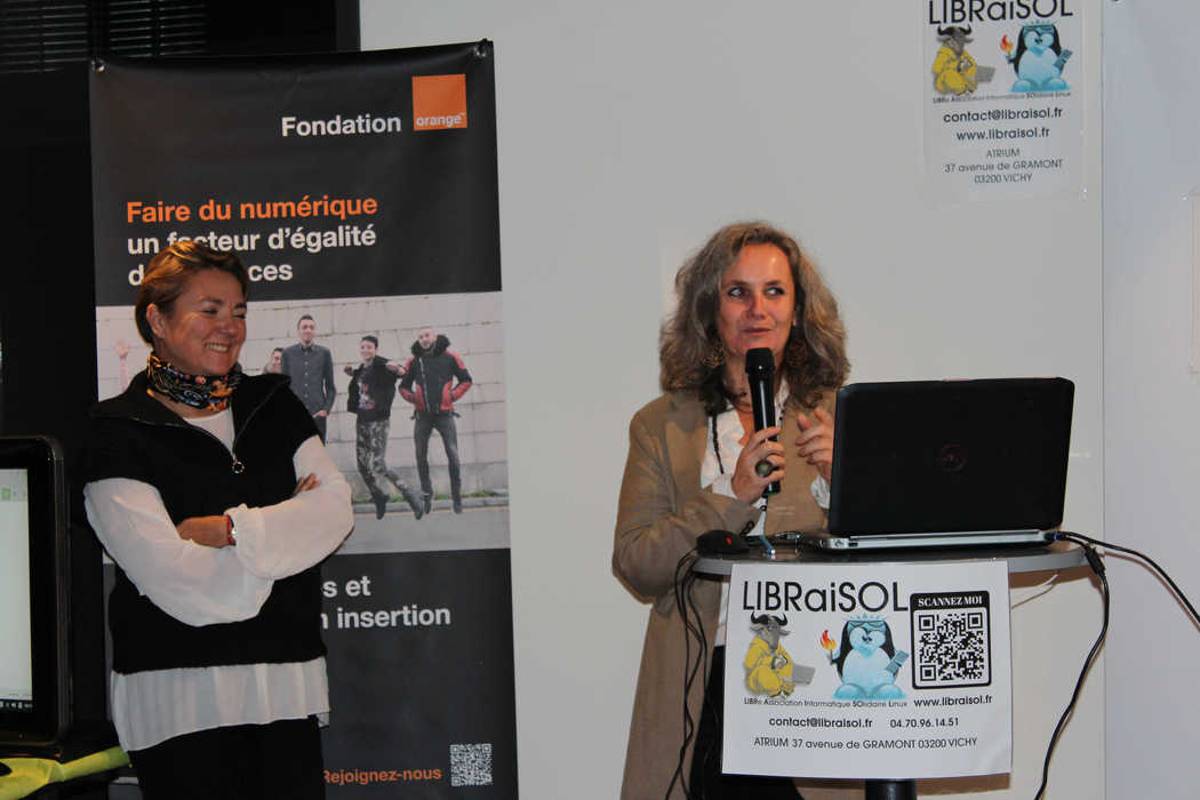 LIBRaiSOL stands for “Libre Association Informatique Solidaire Linux”. Pascal Getenet, volunteer co-founder, made the genesis of this young association which filled a need underlined by confinement: “It is first of all the story of a handful of enthusiasts. Thanks to a partnership of solidarity associations, among others the Recyclerie de Vichy, and other partners, we collect equipment to restore it. The data present is erased, before installing the free GNU/Linux operating system (with a software suite and its settings). He continues: “Unlike proprietary operating systems (such as Windows or MacOS, etc.), operating system updates are free and do not require increasingly powerful hardware. We are the 2022 laureates, “coup de coeur” of solidarity projects supported by the Orange Foundation, which supported our action during confinement (PC supplies, mobile cards), then by allowing us to buy back used equipment. »

To discover here the video that the digital media BRUT devotes to the Association.

During the general meeting in November 2022, the Orange Foundation, Vichy-Community and the Allier Departmental Council renewed their support for the young association

Thanks for the order!

This year, the Department awarded a grant to the association for the implementation of an operation that has become increasingly necessary, “Thank you for the computer”, intended to equip around a hundred students. Sebti, 20, is an affable and smiling young man, who remains confident in the future, despite some setbacks in his school career. He is right: when you are 20 years old, the field of all possibilities is open! He has an appointment with Rose Chambonnière, digital trainer at LIBRaiSOL. The young man did his schooling at the Albert-Londres high school, before “letting go at the end of the first year”. Coming from a large family, he never had his own cell phone. As a student in Lyon, he is energetically getting back into the race of studies, after having integrated a work-study UCPA training course which will allow him to obtain a professional diploma as a sports educator. He aims to pass his baccalaureate to become a boxing coach. “When our trainer asked who didn’t have a personal computer, I raised my hand and was surprised to find that I was the only one in our group of 14 students. »

Membership and contract of trust 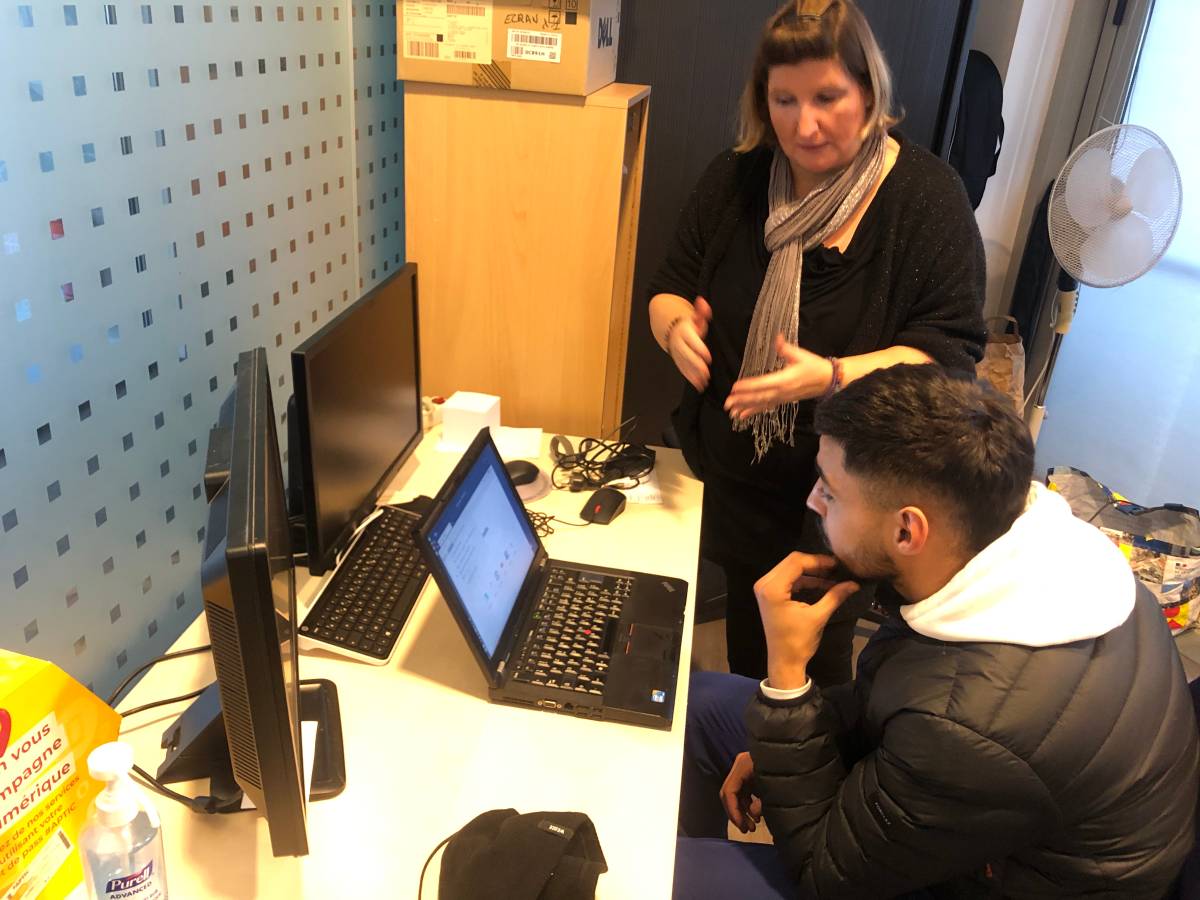 Delivery of equipment in the training rooms made available by Vichy-Communauté within the Vichy Atrium.

The Local Mission sent Sebti’s file up to LIBraiSOL (in other cases, it may be Pôle emploi, Restos du Cœur or CCAS). “The student signs, for 5 euros, a 5-year membership with us, during which we will be at his disposal, if the equipment breaks down or to accompany him on the internet. » Contract of trust. Some beneficiaries return the material or become volunteers as soon as their situation becomes more stable. Rose will take the time to explain the functionalities of the Linux system, the advantages of a “free” operating system, compatible with Firefox (and other systems) and the office pack. The computer is already configured to help the user in his procedures and his research: ameli, Caf, Training account, tax, employment center, France connect, Carsat, Agir arrco, etc. The trainer remains very educational: she also warns the young beneficiary about the uses of the Internet, and the increasingly frequent phishing attempts, about the risks, in general, of unsecured browsing.

Receive our eco newsletter by email and find the latest news from economic players in your region.

Thanks to you, I can work with a high-performance computer, and without worrying about the price. I need it every day because it is essential for studies. You guided me to take ownership of the computer. It’s a great association that allows enthusiasts to help other people and that, humanly speaking, is a great gift! Thank you to the whole team for this shared humanity.

To benefit from a service, it is necessary to be a member of the LIBRaiSOL association. For further information please visit the association website.
Permanence. In the atrium, in the premises made available by Vichy Communauté, LIBRaiSOL is on call every Wednesday, from 3 to 5 p.m.
To join or make a donation
LIBRaiSOL. 37 avenue de Gramont. Tel: 04 70 96 14 51
contact@libraisol.fr

Every week, training workshops, and also “install’party or repair’café” are open to members. They welcome, for example, this retiree, who inherited a family computer. Jean-Paul, a former driver, has never had to use a PC in his professional life. But now he really needs it. On the occasion of an awareness-raising workshop relocated to Lapalisse (the association also provides permanence on Charmeil), he met LIBraiSOL, which has followed him since, accompanying his first steps on the Internet, and ensuring the updating and reconditioning of its equipment: “ I really had to get started when I had to file my retirement application! And there, I want to progress, but without LIBRaiSOL, I wouldn’t have made it. 5 euros, everyone can afford it, but it’s good to pay something anyway. What I like is the exchange, the atmosphere of the collective meetings and also the availability of the team, their patience, their kindness, and the individualized training courses. Because I really need someone to explain to me, that reassures me: I know that I can always come back to the Atrium if I have a problem. »

This batch of computers purchased second-hand and then reconditioned will equip the members of LIBRaiSOL.

Growth in demand in the agglomeration
500 families since 2019 (including more than a hundred this year) have benefited from the equipment delivered by LIBRraiSOL in the Vichy urban area, and also in the Bourbon mountains. In general, the association delivers one desktop computer per family and one laptop per child or student.

Jean-Paul found the necessary assistance to refurbish and equip an old family computer.

Maxime, one of the association’s four permanent staff, a salvage pro, professional computer scientist, outstanding handyman-programmer, and occasional magician, configured and reprogrammed this old laptop which still works very well: “Many people of this generation have never used the Internet and have to use it, among other things, for administrative procedures. To look for a job, it has become essential”, he points out. At the other end of the room, young Nathan, the last to join the team, agrees: “We’ve all experienced it: try to find a job today without going online! It’s mission impossible. You don’t even see the advisers live anymore. » Other members come to learn about the “free” Linux system environment, an alternative to the traditional web giants. The team, enriched by a volunteer engineer, plays more than a training role. LIBRaiSOL creates a solidarity support network that is growing, also making these hotlines friendly meetings.

A young association looking for volunteers

Solidarity with ANEF 63: laptops for Ukrainian refugee families in Allier

Solidarity with Ukraine: Alla was able to obtain a fixed computer for the family and a laptop for the schooling of the children
Alla is one of the Ukrainian people welcomed to the town of Vernet, by the combined action of the public authorities and volunteers from the departmental branch of the ANEF. Internet access remains a vital link.
Alla and her children arrived from Polohy (city in Ukraine between Mariupol and Zaporozhye, an area occupied by the Russians). The refugees cared for by the Red Cross passed through Lyon before ending up at the Vernet reception centre, accompanied by the ANEF 03 (mutual aid association supporting refugees and people in a situation of exclusion). Alla is now staying in an apartment lent by a friend. Rose has just installed a desktop computer and a laptop there, with a French keyboard coupled with a Cyrillic alphabet, configured to work with agility in both languages. This material optimizes the teaching of the two children: “Working, concentrating on learning the French language, it helps me reconnect with life. It’s also important for the children: educated here, they continue their lessons with their Ukrainian mistress from a distance and progress faster, too, in learning French, ”explains the young woman. She herself, a GRETA student for two months, is hard at work on her screen. A way to immerse herself in life, to get out of anguish: her husband and 20-year-old daughter are volunteer fighters in Ukraine. About twenty Ukrainian children will soon be equipped in the same way by LIBRaiSOL in Montluçon.

A French keyboard with a Cyrillic alphabet: these stickers must be purchased new and are expensive for the association

Call for individuals, associations and companies
who are renewing their computer equipment
Individual, company, association, you can donate the computers you no longer use to the Recyclerie de Cusset, partner, or by depositing them in the LIBRaiSOL premises at the Atrium de Vichy. everything is needed, cables, screens, portable, fixed. The high demand also leads a shortage of mice and saddlebags. To equip Ukrainian families in Allier, cyrillic alphabet stickers to stick on keyboards are purchased new. And that has a cost. During the recent General Assembly, the partners, including the Orange Foundation (photo), Vichy Community and the Allier department renewed their support.

Internet – LIBRaiSOL fights against the digital divide in the Allier, making IT more united and free