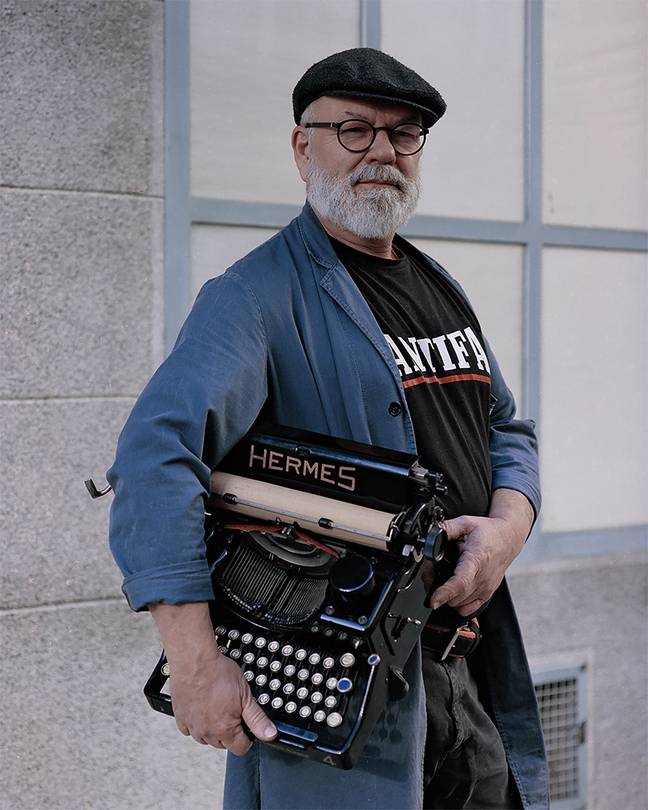 It’s a little mechanical rattling that rocked the 20th century. That of typing on typewriter keyboards. From the American Wild West to the emancipation of women, through the two world wars or the birth of computing, the typewriter has been involved in all battles and all stories, big and small. She knows today some return among enthusiasts despite the overwhelming domination of computers. Or maybe precisely because of it. And it is naturally to her that we thought to create our first collection of NFT membership cards for 20 Mint.

“I like this phrase from Bismarck: if we don’t know where we come from, we don’t know where we are going, confides Jacques Perrier. Many young people who come to have their machine repaired in my workshop tell me about this need to connect with their origins. » A specialized typewriter for forty years in Lausanne, he took over his father’s business and is one of the last typewriter repairers working in Europe.

Merchants of War and Machines of Peace

In his small community museum, “without any subsidy” he specifies, there are more than a thousand models. “The first typewriter to be marketed is the famous Remington Typewriter, released in 1874”. Its inventor, the journalist and publisher Christopher Latham Sholes had indeed joined forces with the arms manufacturer to mass-produce his invention. A unique opportunity for the industrialist when the Civil War had just ended. “In reality, it is difficult to say who is the inventor of the typewriter, because there have been dozens of patents and as many inventors, including the Englishman Henry Mill from 1714”, lists Jacques Perrier.

In any case, it is to this Mr. Sholes and his machine that we owe the QWERTY keyboard, still used on English-speaking keyboards and of which AZERTY is the French version invented at the end of the 19th century. “Its goal was to slow down the writing and to prevent the frequently associated letters from seeing their hammers intersect”, explains the mechanic. Because on a typewriter, keystrokes mechanically drive small metal bars at the end of which the characters are attached, which strike the ink ribbon, leaving behind an imprint on the paper. Among these keys we also surprisingly discover the “@”, which was used in the 19th century for accounting.

Despite fragile and capricious mechanics, the typewriter enjoyed commercial success from its launch. “We can thank Mark Twain, who was probably the first journalist and author to use a Remington that he took on all his trips,” says Jacques Perrier. Many companies are embarking on the design and marketing of increasingly ingenious typewriters, with index, barrel, radial strike or even “grasshopper” mechanics.

And to better remunerate 20 Minutes, do not hesitate to accept all cookies, even for one day only, via our “I accept for today” button in the banner below.

But it is Underwood 1, in 1895, which will finally allow the author to see what he is writing and define the standard of form that we know. Inspiring its competitors like Oliver, Hammond, Mignon or later Hermes in Switzerland and Japy in France.

“The greatest revolution of the typewriter is probably sociological, assures Jacques Perrier, because it has allowed women’s access to the labor market. Indeed, clerks with handwriting are quickly supplanted by typists with higher productivity. And the manufacturers even go so far as to organize speed contests between these young women to gain publicity. ” In the movie Popular, with Romain Duris and Déborah François, for whom I was a consultant, Rose exclaims: “Being a typist is an adventure, a journey!” And for post-war women, it was indeed the case and the opportunity for a social ascent outside the factory or the fields”, assures Jacques Perrier.

Throughout the 20th century, the mechanics of typewriters were to be refined with, in particular, the arrival of the electric motor in 1914, which made it possible to avoid the physical and repetitive gesture of carriage return by pressing a simple key. Lighten up, as with the mythical Hermes Baby prized by Kerouac or Hemingway. And to be more flexible, with IBM’s Selectric ball machine, which allows you to change typefaces and was produced in more than 13 million copies from 1961 to 1986. Surprisingly, all models silent or offering more practical keyboards that the Qwerty or Azerty standards will be commercial failures. Blame it on old habits!

It was not until the democratization of computers from the 1980s that the decline of the typewriter finally began. Steve Wozniak would have had the idea of ​​the first Mac by seeing his machine enthroned in front of his television. We know the rest of the story…

Yet in this 21st century the typewriter has not said its last word. “Fortunately, 13mm tape made in Mexico is still available. The same standard since the First World War. And I receive requests for spare parts from Japan to the United States”, notes Jacques Perrier. The profile of buyers? ” There is everything. It goes from 7 to 77 years old. From the little kid who wants to repair a broken machine to his grandmother who wants to rediscover the pleasure of writing. »

The return of slow writing

Because if computers allow us to have access to universal knowledge and to communicate in real time, some refractory people still prefer slowness and the pleasures of disconnection. If he cannot name his customers, the computer printer claims to have among them several very popular French authors. And even having repaired Johnny Depp’s machine during his visit to Switzerland two years ago!

“When you type, you first have to think about what you want to say. There’s no copy-pasting, backtracking, or notifications to distract you. It’s mental gymnastics that I compare to film photography. Take 50 photos with your phone and sort them afterwards, it’s practical. Knowing how to adjust the aperture and the shutter speed to take a perfect photo the first time is better,” concludes the enthusiast. As for writing this press article all at once on a typewriter, yours truly couldn’t manage it. The proof may be that beyond beautiful antiques, it is a certain way of thinking that it is a question of preserving.

From the Wild West to Apple, a carriage return to the future for the typewriter