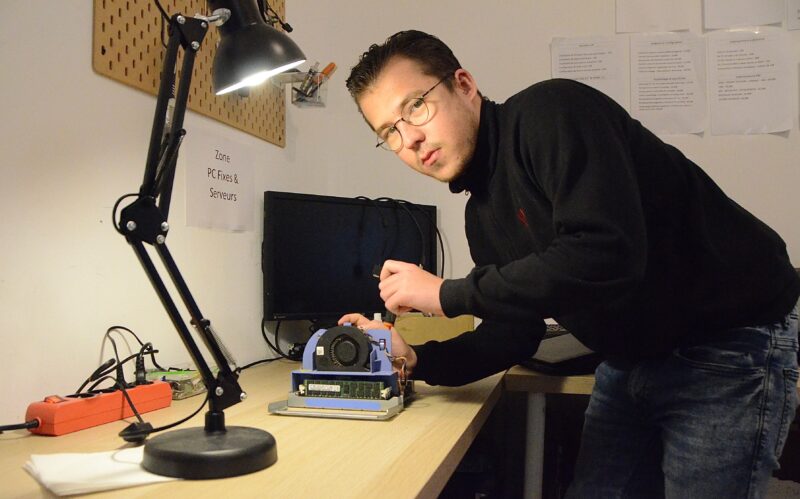 Four months after the takeover of the VM Center company and its installation in Beaucaire, Romain Blucher and Benjamin Pinaton launched “Recyclordi”. To carry out this solidarity initiative, the two young men are looking for partners. The community of communes Beaucaire Terre d’Argence is already there.

Fresh out of Greta du Gard, his senior systems and network technician diploma in his pocket Romain Blucher has become the new boss of VM Center. It was in Beaucaire that he decided to set up his shop exclusively dedicated to IT, on December 7th. ” Do you know of another business specializing in this field in this city?“, he asks with irony.

More seriously and with a certain emotion in his voice, the 18-year-old native of Montpellier shows his gratitude to his father, Robert Blucher, the manager of the Camargue Automobile Museum. ” It’s thanks to him if I’m here today, he always encouraged me. Since then, Romain has teamed up with Benjamin Pinaton to continue to push this project forward.

In their small shop located at 19 rue de la République, the two partners have launched a solidarity initiative to fight against the digital divide by allowing the most modest families to be able to afford a computer. To do this, the duo plans to refurbish computer equipment which they will then resell at unbeatable prices, between 60 and 70 euros for a computer.

” Today, with the dematerialization of public services, the progression of telework, distance studies it is difficult to live without a computer device and without access to the Internet. But it’s not given to everyone to spend several hundred euros for a computer“, notes Romain. Already aware of this economic brake, the young man has made reconditioning his core business.

“This concept is interesting both ecologically and socially”

But with “Reclyclordi”, he intends to go further thanks to partnerships with local, departmental and even regional communities and companies. A first contract was signed with the Beaucaire Terre d’Argence community of municipalities as part of the territorial “climate-air-energy” plan. ” This proposal complements the tools already put in place by the CCBTA to fight against the digital divide. Recently for example, we inaugurated the Maison France Services in Bellegarde. This concept is interesting both ecologically and socially.“, reacts Dominique Pierre, community adviser accompanied by Pierrine Gayton, both in charge of this file.

An inventory is underway in the offices of the various community branches. All reconditionable machines will thus be entrusted to Romain and Benjamin. Once the work of these computer surgeons is finished, the computers will be offered to the most modest families in the area.

The latter must complete an eligibility form to be collected from the CCBTA reception. Only households whose annual income does not exceed 10,000 euros will be eligible for this offer. As for the community of municipalities, it will benefit from a share of an average of 40%. ” And if the material is not sold within six months, it will be donated to charities“, assures co-manager of VM Center. This first partnership will be implemented from April 3, 2022. It is up to other professionals and institutions to join this virtuous adventure.