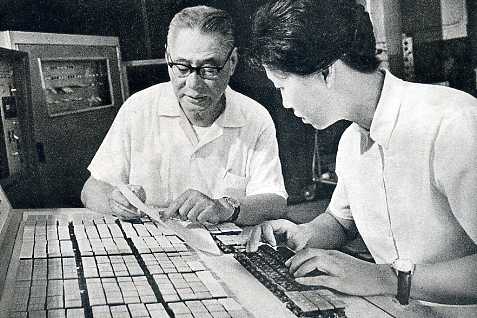 Zhi Bingyi was a Chinese political prisoner, but also a renowned scientist. His most famous achievement was encoding the Chinese language for use in computer systems, a major breakthrough in China in the late 1970s.

A solution to digitize Chinese characters

Zhi Bingyi (1911-1993) was imprisoned by Mao Zedong’s regime. According to the authorities, this scientist was a reactionary intellectual. Prior to his incarceration, he had earned a doctorate in physical sciences at the University of Leipzig (Germany) before turning down a job offer from the United States. As explained Wired in an article of January 23, 2022, Zhi Bingyi indeed wanted to return to China to take up a teaching-researcher position there. Imprisoned in 1968, the man cut off from the world had no access to information and could not continue his research.

In his rudimentary cell, Zhi Bingyi was on his own, facing a sentence in Chinese written on one of the walls: “Leniency to those who confess, severity for those who refuse. » Over the days and weeks, the researcher, who was constantly staring at this sentence, developed a different vision of it, in the form of dots and dashes. His idea ? Develop a language transcription system allowing to digitize characters.

A series of letters for each character

The French geographer and linguist Stanislas d’Escayrac de Lauture (1826-1868) had already tried to take an interest in Chinese characters for the purpose of transcription. However, although interesting at the time, his techniques did not meet the emerging needs of the computer field. However, China in the 1970s was faced with a dilemma that Zhi Bingyi would eventually solve. The country had to have a reliable computer system in the air, military and industrial fields. It was also about not abandoning Mandarin in favor of English.

Zhi Bingyi then simply developed a system allowing all Chinese characters to be written using a Roman alphabet keyboard. The researcher chooses to code each character with a series of letters and for over a year he used a stolen pen and a ceramic teacup to record his many thoughts. He then memorized each result and erased the traces of his work.

The scientist therefore succeeded in perfecting his method, based on both the phonetics and the geographical structure of the characters. This dual system made it possible to circumvent the numerous difficulties due to the presence of many homophones in the language. Finally released after fourteen months in prison, Zhi Bingyi then occupied “ungrateful” posts far from his intellectual abilities. However, he put this time to good use.

A decade of additional work for Zhi Bingyi

One of those positions was none other than a warehouse supervisor. In his office, he had access to the foreign press where he discovered encouraging advances in type transcription in Japan, Australia and the United States. The man needed about ten years to perfect his system and develop a code that avoided as much as possible the confusions between characters.

In 1978 he published his first article in the journal Nature. He explained there that he had generated no less than 456,976 codes different, each composed of four letters out of the twenty-six of our alphabet. However, these codes made it possible to transcribe all of the tens of thousands of Mandarin characters. This real titanic work finally allowed Chinese writing to make its entry into the computer system.

Computers: half a century ago, this prisoner coded the entire Chinese language