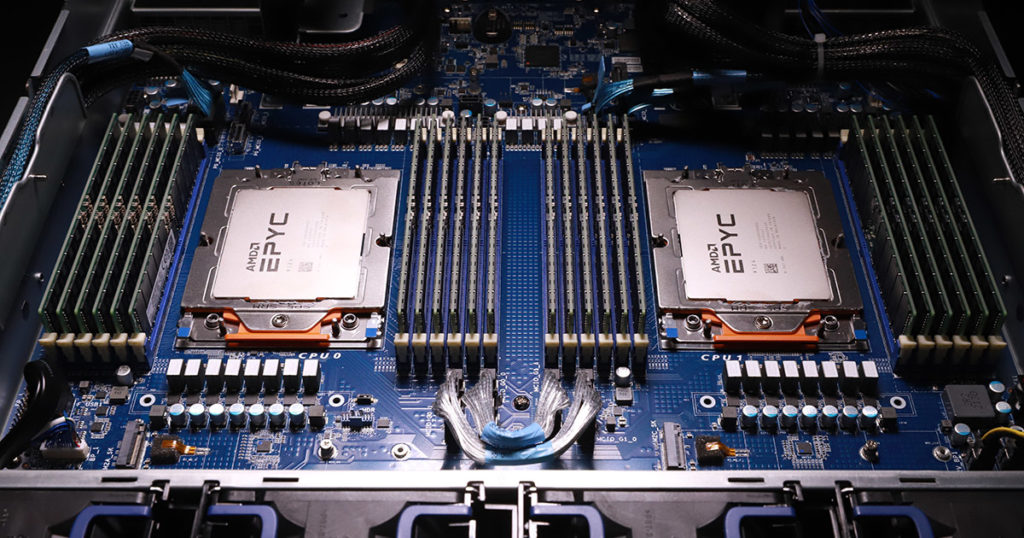 The brand new range of AMD EPYC 9004 processors for servers is coming and the renowned manufacturer GIGABYTE is taking the opportunity to renew its offer. This latest generation is based on a new x86 platform, a new socket, and moves to the famous Zen 4 architecture, integrating ever more advanced features and technologies, promoting improved performance and the processing of demanding workloads. GIGABYTE has already launched 22 AMD Zen 4 compatible servers and motherboards, each with a wide variety of socket options (single or dual).

What specifications for the AMD EPYC 9004?

With the 4th generation EPYC processors, AMD is moving to 5nm engraving, a process that increases performance while improving the energy efficiency of the chip, and is moving to a new SP5 socket. This platform upgrade targets supercomputing, artificial intelligence, cloud, big data and general enterprise computing, with advancements also in security features.

The main technical characteristics of the AMD EPYC 9004 processor family are as follows:

And who says change of processor, says evolution of the material which accompanies it, starting with the motherboards and the waiters.

GIGABYTE’s new M-series motherboards are available in single-socket or dual-socket versions. They are compatible with 4th generation NVMe SSDs, with PCIe 4.0 and 5.0 interfaces and with the entire line of 4th generation AMD EPYC processors from 16 to 96 cores.

The E-ATX MZ33 and MZ73 models have 24 DIMM memory slots. The MZ73 is available in two variants: the LM0 equipped with four PCIe 5.0 x16 expansion slots and the LM1 with PCIe 4.0 x16 slots. GIGABYTE made this choice to satisfy those who need the best GPU performance allowed by PCIe 5.0, as well as those who are still equipped with PCIe 4.0, by far the most widespread standard today.

These general-purpose one- and two-socket solutions offer a balance of compute, memory, storage, and scalability. They house slots for 2.5- or 3.5-inch hard drives, and some models, including the R263-Z33 and R283-Z93 servers, are compatible with dual-slot GPUs. Available in several variants, the R283 has 24 DIMM slots, two 1 Gbps LAN ports, 12 or 24 3.5-inch inputs and 2 or 4 2.5-inch inputs depending on the version. Depending on the reference, the server is supplied with power by a Dual 1600W, Dual 2000W or Dual 2400W power supply unit.

Designed for intensive computing, AI and high-performance parallel processing, the G series servers benefit from a design and thermal functions designed to make the best use of GPU capacities. The new two-socket 2U G293 server is capable of integrating up to eight GPUs thanks to all its connectors (PCIe 4.0 x16 or PCIe 5.0 x8) and has a LAN speed of 10 Gbps. For maximum efficiency, it uses a Dual 3000W titanium power supply matched to the power it needs to generate to quickly complete complex processes simultaneously.

These multi-node servers offer a good compromise between CPU computing performance and storage capacity. They are particularly designed for intensive computing and for hyperconverged infrastructures (HCI). The H273 is available in three variants, the best-equipped of which, the H273-Z82, has 24 slots for 2.5-inch hard drives, all placed at the front of the case for easy access. It is also able to accommodate up to eight CPUs at 400W of power thanks to its advanced cooling system.

This type of server has the particularity of being shallow and lends itself particularly well to an infrastructure that is not a data center. With their characteristics and positioned at the edge of the network, the E-series servers enjoy very low latency. With its E283-Z90, GIGABYTE also launched its first-ever E-series server with two sockets.

GIGABYTE provides its customers with its management console, available from a web browser, as well as its server management software, in order to remotely administer and ensure the maintenance of all the acquired servers without having to pay any fees. additional licenses.

This article was written in partnership with Gigabyte.


Discover our social media profiles and other pages that are related to them.https://yaroos.com/related-pages/