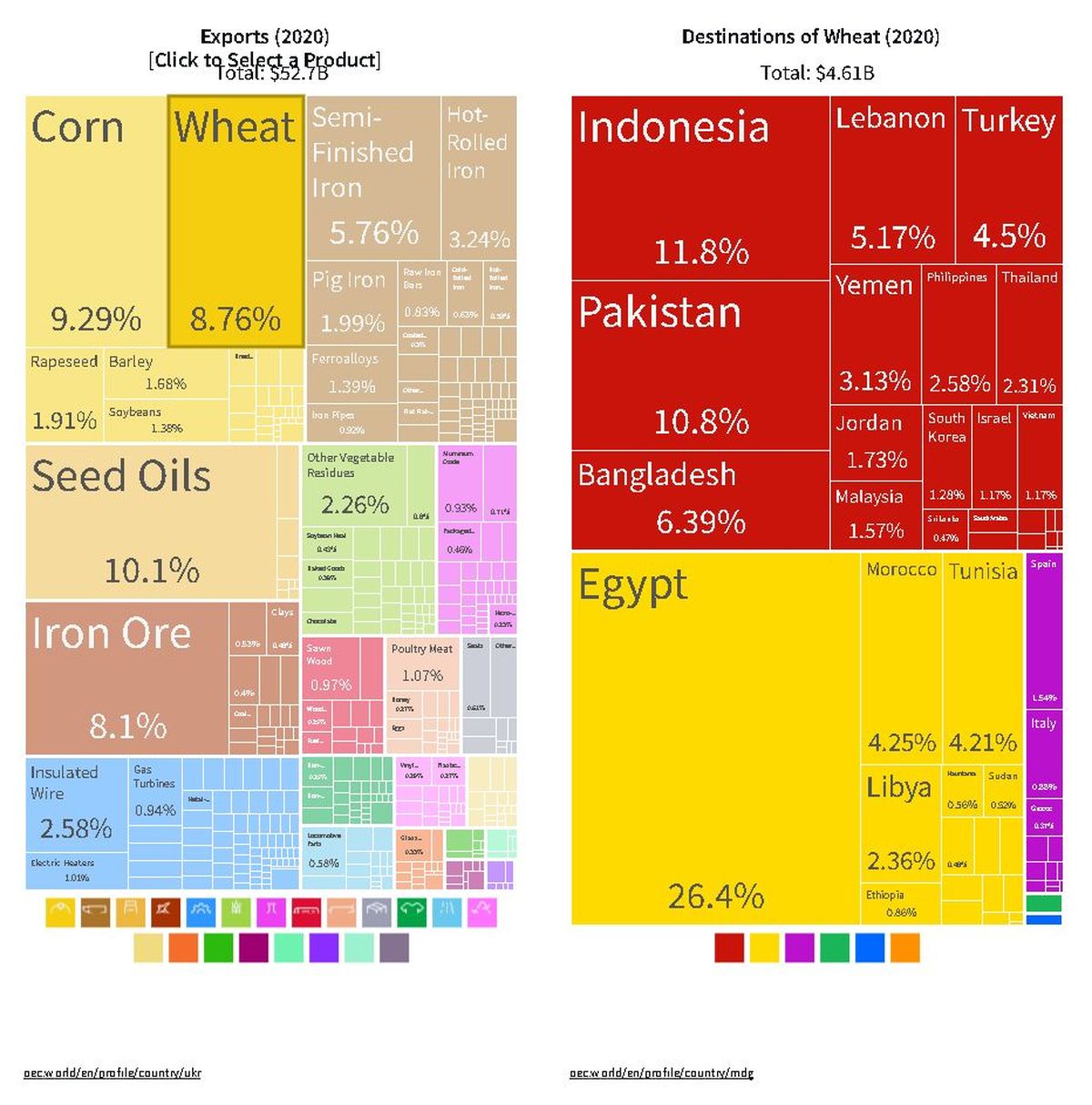 Everyone is yelling at Russia for creating grain and wheat shortages. But Russia is always ready to sell its wheat, but it’s the West shooting itself in the foot with its dumb sanctions. We also have heavy fire on the fact that Ukraine can no longer deliver its wheat. But that doesn’t have much impact on its own.

It is true that Europe imports 35% of its cereals from Ukraine, but it was just in time. On average, Ukraine produces 85 million tons of wheat per year, half of which is exported. When war broke out, then railways and bridges were blocked and neither Ukraine nor Europe have the storage capacity for all the wheat. It needs to be imported as quickly as possible. Knowing that we are talking here about the 2021 harvests, because in 2022, we will have almost no production.

Europe prefers Ukrainian wheat, only for a political purpose, because kyiv can quickly deliver it to countries like Poland, Hungary, Slovakia or Romania. Due to the blockades, there is little wheat for many requesting countries. Because the bulk of Ukrainian exports go to Africa and Asia. Thus, the largest customers of Ukraine are Indonesia, Egypt, Pakistan or Bangladesh. This drives prices up artificially. And like Europe can offer a higher price, so it indirectly causes famine in emerging countries.

But these are nonsense, because Russia is sitting on mountains of wheat. In previous years, she had harvests that shattered all records. Except there is a small problem. To buy Russian wheat, you have to go through the Agricultural Bank of Russia… which has been disconnected from SWIFT. What makes that the Europeans are in a stupid situation where there is wheat, but they cannot buy it by pure ideology.

Russia is the largest wheat producer with 17% of world stocks while Ukraine is only 6%. And so, Europeans make a big fuss and fight like hungry dogs robbing the small producer rather than swallowing their pridewhich otherwise has no reason to exist, and to buy what Russia lacks.

China, Kazakstan and India are also major producers. But in addition to the fact that Chinese cereals are subject to massive taxation by the United States, the productions of these countries are intended above all for their consumption and their neighboring countries. In the case of Europe, the answer is obvious as with gas… Europeans cannot do without Russian wheat unless they deliberately cause famines in the Middle East and Africa.

And the worst part is that Western hysteria is spherical in the sense that whatever angle you look at it, you always find the same stupidity. For example, one can bypass the SWIFT system via Dubai with a few shenanigans here and there. Russia does it with Asian countries and it is the same for certain European countries which do it under the coat. So let’s imagine that in front of russophobic crowds, Europeanists claim that they will never buy Russian wheat, but that in the back room, they manage to obtain it through intermediaries.

However, the economy and the current world always find solutions, but European submission to the United States is another major problem. Thus, lately, Iran has benefited enormously from the sanctions against Russia. Firstly, the INSTC, which is a cheaper alternative to the Suez Canal, is growing at full speed. This route, which connects Asia to Russia, is becoming a crucial issue and Iran is at the heart of this circuit.

This means that if Europeans buy Russian wheat by devious means, Russia could deliver the wheat to Iran which could then dispatch it to many countries, including Europe. Iran estimates that it could deliver 7 to 12 million tons of wheat in 2022, which gives us about 25% of Ukrainian wheat. Of course, it’s not enough, but it would allow Europe to have some of its wheat without starving the poor countries.

And so, we have to buy Russian wheat from the Iranians, but there is a small problem… Iran has been disconnected from SWIFT since 2018! It was under the Trump administration, but as the Europeanists, in their unparalleled servility and submission to the Americans, did nothing to protest, so Europeans cannot buy wheat from Iranians even if they wanted to.

The result is that Russia bears no responsibility for the current grain shortages. There is enough wheat to feed the whole planet. Because we would have to add American, Canadian and Australian production. But the latter do not want to change their exports to satisfy Europe.

The problem with shortages is that you have to move from a just-in-time strategy to a planning model. The lack of storage in Ukraine and Europe, stupid sanctions against Russia and blind followership to the Americans means that Europe is disrupting global supply chains by outbidding poor countries that cannot compete.

And we will have other shock waves from September 2022. Because you have the May and June crops which are intended for human consumption, but the autumn crops are intended for livestock during the winter. If Europe remains so hysterical about its stance with Russia, then that means millions of animals will have to be killed because they will starve.. And we must therefore find solutions in the next 4 to 5 months.

So we could end up with shortages and famines for humans and animals because you punish your supply chains by your stupidity and prevent your importers from paying for the products that your populations sorely need.

Wheat and cereals: The real problem is the stupid sanctions against Russia – News Politics and geopolitics