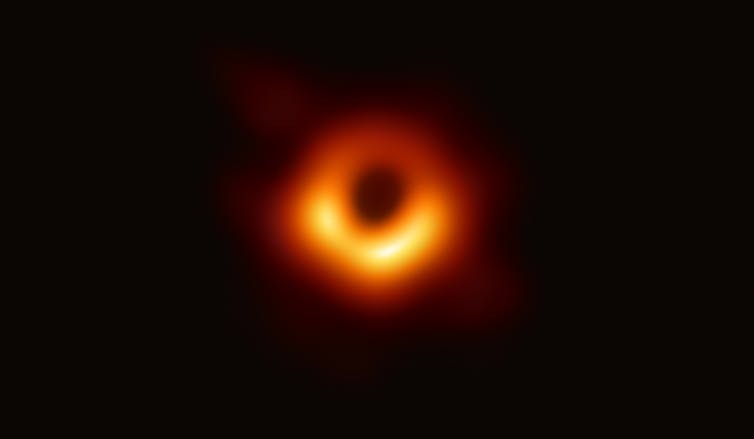 At the center of our galaxy, the Milky Way, sits a supermassive black hole, around which we revolve. Until now, no one had succeeded in observing it, and for good reason, a black hole absorbs all the surrounding light. However, a research team has managed the feat of produce the first image of “our” black hole, Sagittarius A* or SgrA*. More exactly, we can see its immediate environment with this orange halo.

Already in 2019, a similar image of a black hole made history. It was the black hole M87*, at the center of the galaxy Messier 87. Located a thousand times further than the center of our own galaxy, it is also a thousand times larger, so that the two objects are the same size ” apparent” in the sky: they appear “the size of a donut placed on the Moon seen from the Earth”, to use the comparison of astronomers from Event Horizon Telescope who produced the image.

Imager SgrA* proved to be much more difficult than M87*, but it is not a question of apparent size, as we have just seen.

This is because we never see the black holes themselves (the black hole is in the dark area in the center of the image), but rather the matter which collapses towards their center, and which, while accelerating , emits electromagnetic waves that reach us. This material rotates at a very high speed (10% of the speed of light), around the center of SgrA*. As SgrA* is 1000 times smaller than M87*, matter makes a turn much faster (in just a few minutes around SgrA* instead of a few days or even a few weeks around M87*), and the radiation that reaches us is more unstable over time.

It is therefore necessary to observe SgrA* for less time to obtain an average image of similar quality to those of M87*. This is the difficulty: as the variability of SgrA* is greater, each image of SgrA* is different from the others, and we cannot add them easily, we must add similar images, which are necessarily shorter (for overcome this variability) and therefore more rare (because most of the images are different from each other).

Matter collapsing onto the black hole heats up in the accretion disk and emits light. This is the accretion disk, which has inhomogeneities: the disk is more or less thick depending on the distribution of the matter, if the matter falls preferentially in one place of the disk then the disk will be thicker in this place, with more light intensity, and which is found on the images in the form of more or less intense areas: the orange halo.

Images in the radio domain

Supermassive black holes emit mainly in visible radiation, ultraviolet, even X-rays but also in the field of radio waves, it is this part of the signal which could be detected from the Earth thanks to theEvent Horizon Telescope : a network of 11 radio-telescopes distributed on the surface of the Earth, each composed of several antennas. One of them is in France: it is the NOEMA telescope, on the Bure plateau in the Hautes Alpes, which includes 12 antennas.

The signals from the different antennas are combined using a supercomputer following the principles of interferometry. The larger the antenna array, the higher the resolution.

Interferometry is a very sensitive technique: to cause two electromagnetic waves to interfere, the peaks of their respective waves must not be too far apart (we then say that the waves are coherent). It’s a bit like combining the oscillations between them, created by two stones falling into the water, if they fall at different times, the oscillations do not interact or only slightly, if on the other hand they are dropped at the same time, then the oscillations interact, we say that they are then coherent.

The phenomenal amounts of data generated are then stored on hard disks and transported by plane to the computing center where the interferometry calculations take place.

But these calculations are not enough to generate the images presented by the collaboration of the Event Horizon Telescope. The researchers actually modeled thousands of black hole configurations with different velocities and axes of rotation, to compare the signals that would escape such black holes to the signals actually detected.

What color is a black hole?

The colors of the images are therefore false colors, since radio waves are detected, invisible to the human eye. They indicate the temperature of the different zones around the black hole, called brightness temperature. For SgrA*, the temperature ranges from 0 Kelvin (this is the absolute zero of temperatures, ie approximately – 273 ℃) to 14 billion Kelvin; while for M87* it ranges from 0 to 6 billion K. This is always because SgrA* is smaller and the collapsing matter is closer to its black hole.

In the future, the team hopes to be able to make films of black holes in order to study their dynamics, changing structures and variabilities in the accretion disk, observe the jets emitted perpendicular to the accretion disk or even their magnetic fields. . This may allow the theory of general relativity to be tested in more detail.