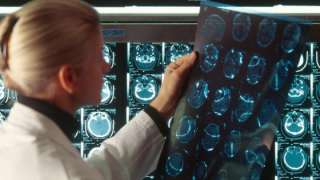 A doctor examines the results of a CT scan of a stroke victim (Illustrative photo).

HEALTH – Artificial intelligence to help in the management of stroke ? This is the experience carried out in UK. According to an announcement from the British Ministry of Health on Tuesday, December 27, the number of patients who show little or no sequelae after a stroke has been multiplied by three thanks to a system ofartificial intelligence set up in five hospital networks across the Channel.

Developed by a company based in Oxford, the Brainomix e-Stroke software reduces diagnostic time by more than an hour and allows the most suitable treatment to be chosen quickly.

Make up for deficiencies

“To guide a stroke, you must first have a diagnosis”explain to HuffPost Professor Norbert Nighoghossian, from the Vascular Neurology Department of the Lyon University Hospital. “In the classic system, the diagnosis requires the interpretation of the imaging by an expert radiologist. » Depending on the result of the scan, the neurologist will then specify the type of treatment adapted to the patient.

However, “there are areas where you don’t have permanent radiologists in the emergency departmentexplains Professor Norbert Nighoghossian. So you don’t have an expert who can interpret the imaging data. »

Thanks to artificial intelligence, the software would therefore make it possible to remedy these deficiencies, but also to help decision-making in the interpretation of brain scans, to allow the patient “to have the right treatment, in the right place, at the right time”, underlines the British Ministry of Health. All in a field where saving time is crucial. “Every minute saved during the initial in-hospital assessment of people with stroke symptoms dramatically improves a patient’s chances of leaving the hospital healthy”said in a press release Dr. Timothy Ferris, director of transformation within the British public health system (NHS).

According to the press release from the UK Department of Health, the use of Brainomix e-Stroke in 111,000 cases of suspected stroke increased the rate of patients who subsequently suffered no stroke from 16% to 48%. disability or mild disability.

The Ministry of Health also cites the example of Carol Wilson, teaching assistant and grandmother, who in June 2021 suffered from intense cramps and rapidly lost her sight and the use of her limbs. The software made it possible to quickly diagnose a blood clot in the brain and to opt for a thrombectomy, a medical intervention consisting in removing a clot which obstructs a cerebral artery. “I was able to sit up and text family the same day, and go home and walk again about two days after having a stroke”she testifies.

“It’s a technological breakthrough”recognizes Professor Norbert Nighoghossian, who would also see the usefulness of such a system in France. “In Auvergne-Rhônes Alpes, we have four effective centers for carrying out thrombectomy for a population pool of 11-12 million people and around 15,000 strokes per year in this region. Not all emergency structures are equipped with 24-hour radiologists, but they do have scanners or MRIs. If we replace the eye of the radiologist with artificial intelligence, we will probably be able, according to the English experience, to better select patients and at the same time treat more of them or refer them to appropriate structures. »

The professor of vascular neurology nevertheless remains cautious. “This is undeniable progress, but there are uncertainties, does he think. It does not solve the basic problem: in France, the number of centers capable of performing a thrombectomy is limited. But if it works well, it is also a way of responding to the lack of competent radiologists in the medical deserts “.