Extending and facilitating access to data analysis is one of the focuses of Tableau, which organized its annual conference in Las Vegas this week. To present the analyzed data in natural language, the editor integrates Data Stories into its SaaS offer, renamed Tableau Cloud. It also adds the ability to create native predictive models, without coding, from the Einstein Discovery engine.

For its annual conference, Tableau brought its users together in one place for the first time since 2019. The event was expecting 4,000 of them this week in Las Vegas. In recent months, the publisher has made great progress in integrating its software with that of Salesforce, which bought it three years ago. There are thus several developments in CRM, access to Einstein artificial intelligence tools and then on using Slack (also acquired by Salesforce). At the head of Tableau for a year now, CEO Mark Nelson reiterated – during a press briefing – the importance of understanding data in an economic and geopolitical context that has become critical, and of extending the use of these tools. to more users. The objective, repeated many times, is not so easy to achieve. A study by Forrester Consulting (see box) shows that while 82% of leaders expect their business teams to have basic skills around data, three quarters of them believe that these teams should be trained on the job. , between them. The same study specifies that in France, only 34% of managers surveyed say they offer all their employees training to master data.

The cloud is the fastest way to access data and derive information from it, Mark Nelson then pointed out when announcing the changes made to Online, now renamed Cloud. This SaaS version of Tableau is already used by tens of thousands of customers and 70% of new customers choose it immediately in preference to the on-premise version. To get started easily with Cloud, more than 100 ready-to-use accelerators will be accessible in Table Exchange. They span multiple applications, businesses, and industries, with fully customizable templates to help businesses quickly derive value from their data. It will soon be possible to launch these accelerators directly within Cloud. During a demonstration, Kitty Chou, product manager, showed how you can not only share your tables securely within your work team, but also publicly, with people who do not have Tableau. A little later in the year, it will be possible to integrate the dashboards created into websites. Kitty Chou also demonstrated administration features to centrally oversee security, with access to customer-managed encryption keys, and the provision of enterprise-wide analytics. The Activity Log function exposes the events occurring in the analytical environment. It helps to understand how users are using Tableau and to track permissions. Another function, Admin Insights, will also facilitate the task of administrators by examining data over long periods of time to identify outdated content.

Last December, Tableau acquired Narrative-Science, partner since 2016, and specialist in data storytelling technologies which consists of presenting data analyzes in a narrative form using natural language capabilities. Narrative Science technology automates the analysis, construction, and communication of insights extracted from data by exposing it in a directly understandable way, increasing the number of people who can take action on that insight.

The charity Feeding America, which has built a national network of more than 200 food banks in the United States, uses the Data Stories feature to help its teams better understand the data they have in order to allocate food aid. (Credit: Tableau/Feeding America)

This acquisition leads to the Data Stories functionality, currently offered in pre-release in the Cloud and soon available, said François Ajenstat, Tableau product manager at Salesforce. The on-premise Tableau Server version will be updated later this year with Data Stories. “You have to make the data speak in the language of the people because 70% of people are not going to speak the language of the data,” Ajenstat stressed. The software will automatically build the stories from the analytics for users to understand what is happening in the data. This is one of the important features announced on Tableau Conference 2022. It is dynamic. When the user interacts with the dashboard, the story updates with the new selection. Everyone can explore the data more precisely.

News around artificial intelligence is the third set of important announcements from Tableau Conference 2022. After making BI more accessible, Tableau now wants to expand the use of data science, so powerful but accessible only to a few. . “When we joined Salesforce, the first thing we did was see what Einstein could bring to Tableau,” recalled François Ajenstat. Business Science analytical tools are powered by AI to help business experts tackle tough data situations. With Model Builder, which will be available in preview this year, it will be possible to create predictive models (linear and decision trees) without coding. 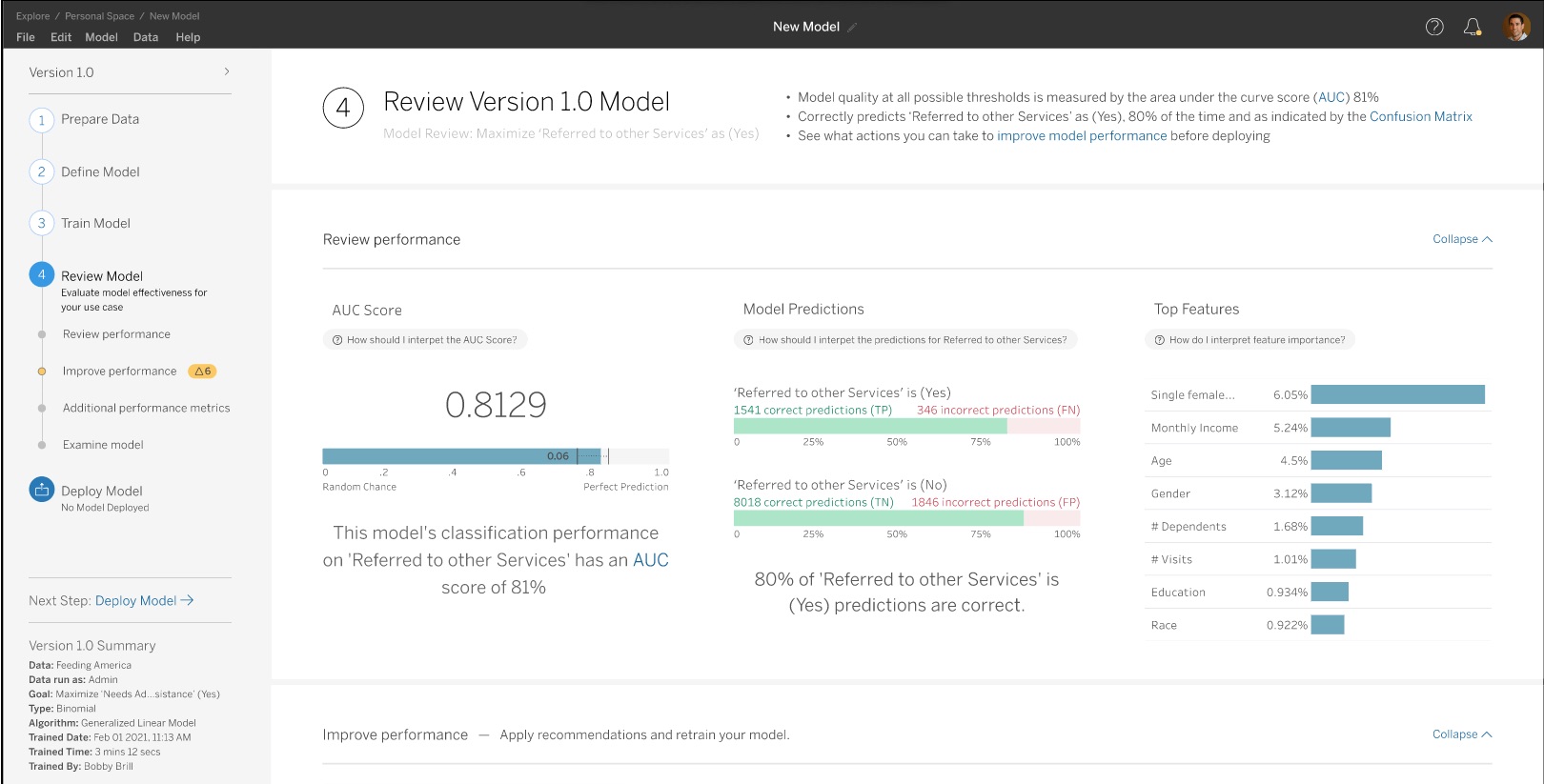 When the predictive model is trained, one can examine its performance to see what the key factors are that influence the predictions, Tableau explains in a note.

These predictive models can be built collaboratively within business teams from the Einstein Discovery engine without leaving Tableau workflows. They will thus be available natively and can be imported into the dashboards to obtain forecasts in the analysis flow. The Scenario Planner feature will facilitate what-if analyses. Starting with a historical database, it will be possible to adjust variables to obtain potential results.

Finally, Tableau also announced more features for developers in three areas. Shared Dimensions enriches data modeling, version 3.0 of Web Data Connector facilitates the connection to web data and APIs and Table Extensions allows the use of R and Python languages ​​within the Tableau data model. Other developments also enrich the tools of developers. 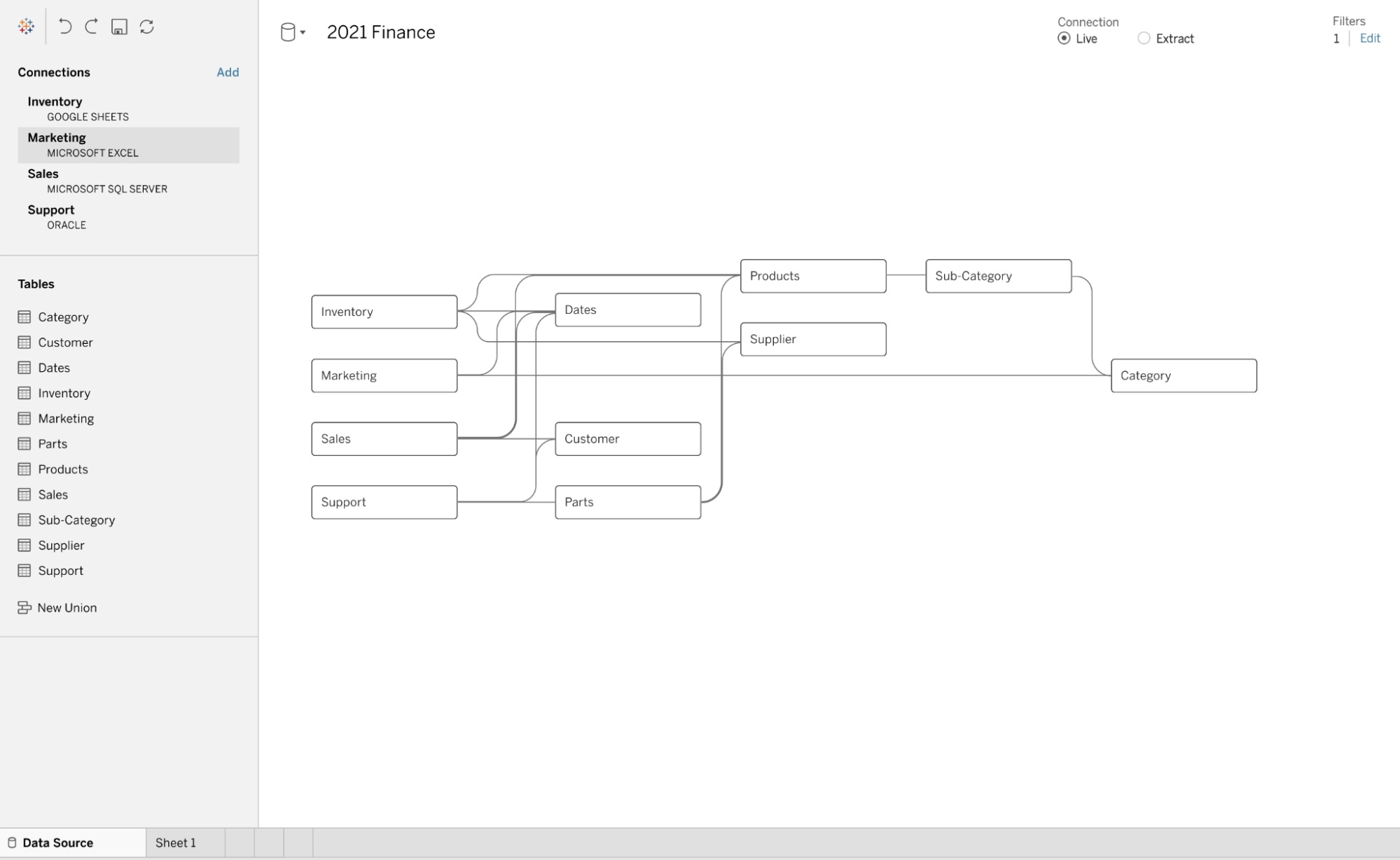 Tableau’s new features will be available by the end of this year.

For France, the survey also shows that 80% of French employees consulted would tend to remain loyal to a company that would train them sufficiently in the use of data.