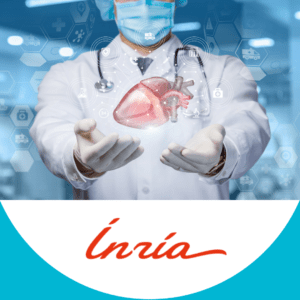 The Inria center of the Université Côte d’Azur, based in Sophia Antipolis coordinate the new european project inEurHearta European and multidisciplinary consortium of 6 partners, which aims to demonstrate the effectiveness of digital tools during cardiac interventions.

The project is coordinated by Inria and the funding is provided by theEuropean Institute of Innovation and Technology – EIT Santé, up to 3 million euros. The project will start the clinical phase on May 17, 2022.

Both technologies have the potential to revolutionize healthcare. Over the past 20 years, cardiac imaging and modeling have made enormous progress allowing the transfer of academic results into clinical practice.

Digital models of the patient’s heart, generated from 3D CT images of patients, are a recognized and powerful non-invasive planning tool.

The objective of the inEurHeart project is to carry out a clinical trial using this technology and to assess its added value. The CHU Bordeaux is the promoter and coordinator of this clinical study.

Cardiovascular disease is the leading cause of death in Europe and Sudden Cardiac Death (SCD) accounts for a significant proportion. Most patients with ventricular tachycardia (VT) are people who have had a previous myocardial infarction. Patients then suffer from recurrent arrhythmias, and their quality of life is degraded. To minimize the risk of recurrence of ventricular tachycardia and sudden death, it is possible to cauterize the areas responsible for the arrhythmic events. The problem to be solved in this project is the preoperative identification of these areas to be cauterized using 3D digital models generated from medical images, in order to guide cardiologists during the intervention.

The solution provided by inHEART, based on R&D work at the IHU Liryc (Inserm/Univ. Bordeaux) and Inria, helps identify ablation targets on the detailed anatomy of the patient’s heart. It is a reproducible and non-invasive solution to guide the cardiologist during the intervention: the imaging allows the detection of targets, even in the depths of the myocardium, a practice which considerably reduces the intervention time and the operational risks.

A cost-effectiveness analysis of the inHEART technology will be carried out by the University of Rotterdam, an important study to inform hospital decision-makers, in order to optimize the allocation of healthcare resources. inEurHeart will make ablation more affordable for healthcare payers. Appointment in 3 years for the finalized study.

Since 2015, the technology has been made available within a university research network (MUSIC network), with multiple collaborating clinical sites uploading images to a secure server and receiving 3D models in return. The inHEART product has obtained CE and FDA regulatory approval.