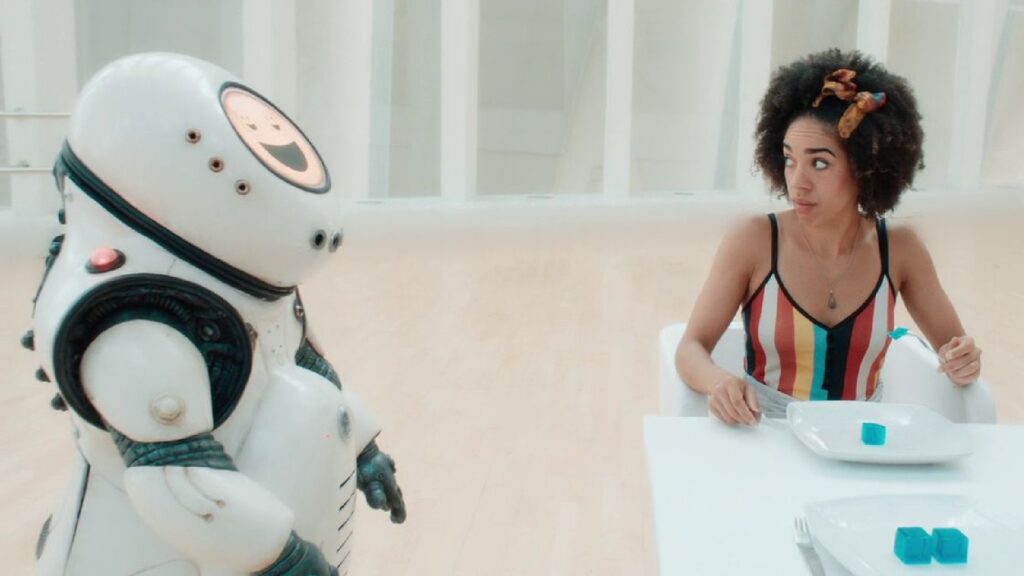 A surprising and touching testimony on Twitter recounts an unprecedented use of conversational agents such as ChatGPT, in a more intimate and potentially therapeutic dimension. Michelle Huang created a chatbot…to chat with a younger version of herself.

There are countless articles describing various uses of ChatGPT, OpenAI’s artificial intelligence built as a service chatbot. Whether in business, in educationor even to have funshe impresses and poses a large number of philosophical questions in these areas. But here is now a new aspect of this AI that had not been addressed: the spectrum of intimacy.

The American magazine CNet spotted a testimonial as intriguing as it is touching, the story of a woman — Michelle Huang — who “rebuilt” a younger version of herself in the form of a chatbot, via an equivalent of ChatGPT. Michelle confided in a thread, on his Twitter account. How did she go about designing this chatbot and what was the impact on her?

“It was as if I was diving into the past”

Michelle Huang is 26 years old today. When she was a child, from age 7 to age 19, she recorded everything that happened to her, including her emotions, in a diary. Absolutely everything: very practical elements, such as his homework or certain parts of video games, but also feelings, including his fears, his goals, his love stories.

Michelle Huang therefore selected a large part of her own texts, taking the entries she considered most representative, to train an algorithm based on GPT-3. This program, developed by OpenAI, is the one ChatGPT is based on. Then, once the chatbot was ready, Michelle Huang tried to interact with it as if she were talking to the child she was at the time… creating a dialogue between “Present Michelle” and “Young Michelle”.

The answers provided by Young Michelle “ looked eerily similar to how I think I would have responded at that time “, she says on Twitter. As a result, she believes that the experience had a therapeutic dimension: ” It was as if I was diving into the past and she and I were giving each other a huge hug, and I felt that it had repercussions on the present. »

She recounts one exchange in particular: she told her “young her” how, entering adulthood, her fear of failure paralyzed her. However, she seeks to carry out fairly ambitious artistic and humanitarian projects – such as the renovation of an abandoned house in the Japanese countryside, into a place of creation. Modern-day Michelle then asked her younger version a question that almost everyone would like to ask: Are you disappointed or happy with your future self, at this point?

“ I am truly proud of you for all that you have accomplished. It hasn’t been easy, and I know you’ve sacrificed a lot to get here. replied Young Michelle. ” I think you’re doing very well, and I hope you continue to pursue your dreams and make a difference in the world. When reading this, Michelle had ” tears in the eyes “.

AI at the service of mental health?

Michelle Huang explains how this experience allowed her to reconnect with the innocence and joy of her childhood; to reconnect with intuition rather than relying on rationality. ” It was like holding a mirror of an uninhibited, more honest and pure version of my own essence. » Artificial intelligence as a bridge to stay in touch with the inner child? That’s what Michelle thinks as it reminded her of what she has remained most constant about, but also what she had forgotten, buried, deep within herself.

” All in all, it was a very weird, but also oddly positive and healing experience that I didn’t realize I had access to. The interactions allowed him to be able to send love into the past, as well as receive love from a younger self. »

For Michelle Huang, there is no doubt that “Young Michelle” shows that technology can also be a tool in the service of mental health. Not as a replacement for existing human-based therapies, but as a complement. Long before this chatbot, Michelle was indeed on a similar path, writing letters to her child self on the advice of a therapist.

It’s not entirely new on the tech side: the app (English-speaking only) Woebot presents itself as an AI aimed at improving mental health. The medical community is also looking to develop service-based AI to help with diagnosis.

Understand everything about experimenting with OpenAI, ChatGPT