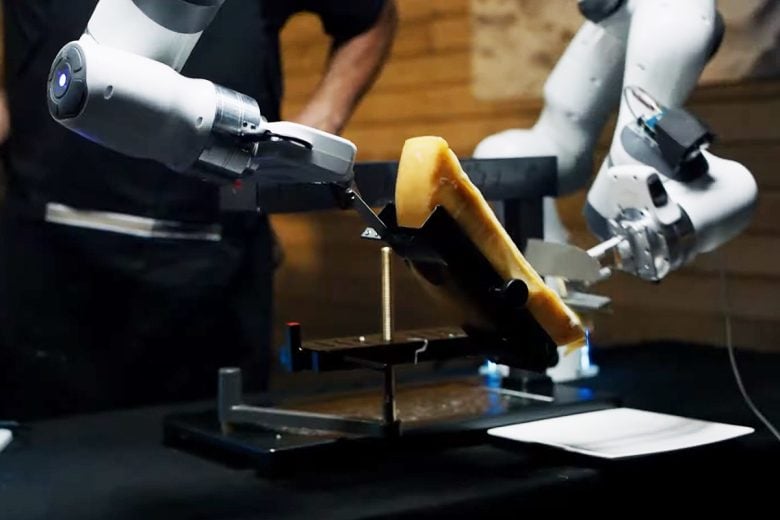 The time has come, raclette time. It is indeed THE dish of winter and everyone, or almost, revels in this succulent cheese poured over charcuterie, potatoes, onions, mushrooms, etc. There isn’t really a recipe for raclette, because it’s all in the runny cheese! Eddy Bailifard, founder of Raclett’House and Swiss master cheese maker, collaborated with the Robot Learning & Interaction group of the Idiap Research Institute to design a robot driven by Artificial Intelligence. This last one is capable of reproducing the gestures of raclette machines that scrape the cheese to make it flow. Its name the Roboclette! Discovery!

The traditional raclette is not in a pan!

In Switzerland and in many mountain restaurants, raclette is served with a device that scrapes the cheese so that it falls on the plate. This movement is usually produced by the cheesemaker’s hand in a quick and flexible gesture. To do pour the cheese, it is enough to exert a little pressure on the heated cheese from the top so that it flows. Eddy Baillifard explains that, seeming very simple, this gesture is not as simple: ” Depending on the type of raclette cheese, the surface can vary in softness and can be more or less fluid”, he explains. The design of the Roboclette, this great device, was therefore not so easy to imagine.

How did they invent the Roboclette?

With Emmanuel Pignatdoctor of the robotics group of theIdiap, the cheese maker first guided the robot’s arm to “teach” human gestures. Subsequently, all “assisted” movements as well as the force required by each type of cheese were recorded. In the end, they were able to transfer the human skills to the robot so that it becomes as intuitive as possible. the Roboclette has been designed for restaurateursin order to relieve them of repetitive movements that the raclette service requires. A functional invention that allows them to be more available to their customers and to better manage their various services. Note that it is also available for individuals, but we have no price to communicate to you. For more information, visit the website Roboclette.ch / valais.ch.

Why don’t you try the pineapple raclette?

Are you tired of eating charcuterie with your raclette cheese? It seems like pineapple raclette have the wind in your sails. Just insert small chunks of pineapple into your skillet, then melt the cheese on top. It seems that pineapple would have the power to burn fat, which can be useful given the calories contained in a plate of raclette. One last tip? It is always difficult to determine in advance the quantity of goods needed to make a raclette. Often we have to finish the cheese on a quiche or melted in pasta, because we always take too much. Check out the awesome site Raclette.world which, by indicating the number of guests and the different charcuterie you are considering, will tell you the exact quantity to buy. A great way to avoid food waste, it has become our raclette ally since we introduced it to you.

Roboclette: the invention of a robot driven by artificial intelligence to serve raclette