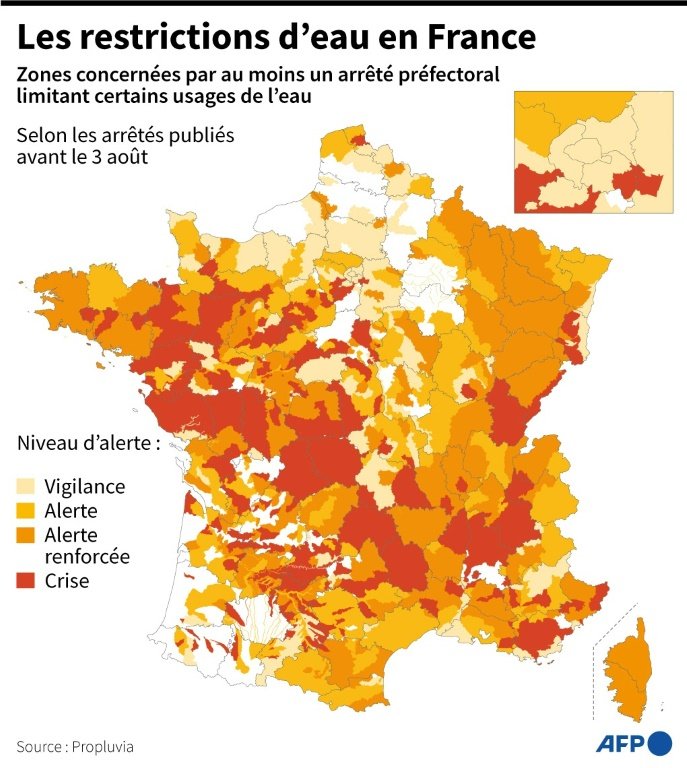 More water in the pipes in a hundred municipalities in France, crops destroyed for lack of watering, biodiversity in danger: challenged on all fronts of this historic drought, the government no longer hides its concern.

On the plateau of Valensole (Alpes-de-Haute-provence), where the Ministers of Ecological Transition and Agriculture went together on Friday, the lavender that made its reputation was picked up, but large pipe winders d irrigation are placed regularly on the edges of the fields.

Thomas Raso, a market gardener in Lagrand, in the Hautes-Alpes, came to the minister with a platter of “black ass” tomatoes, a disease linked to water problems.

“Before we knew how to resist one or two years of drought, not anymore”, points out the market gardener.

The Minister for the Ecological Transition Christophe Béchu responded by pleading to “accelerate the transitions”.

His Agriculture counterpart, Marc Fesneau, noted that cropping systems “are more resilient” to climate change, “but to believe that there will be no need for water would be a quite a tragic mistake”.

“Imagine the situation we would be in today in this region if it weren’t for a number of water retention systems created 40, 50 or 60 years ago,” he said. , before precisely visiting a dam in Sainte-Croix du Verdon.

He insisted on the “multi-use functions” of the dam which both produces energy (here the annual consumption of a city of more than 51,000 inhabitants), is used for agricultural irrigation and supplies drinking water .

But this year, the level of the lake is 5 meters below its summer coast.

In more than a hundred small towns in France, the pipes are empty, underlined Christophe Béchu. As in Castellane, Le Fugeret, Le Castellet and Annot in the Alpes-de-Haute-Provence, villages supplied with drinking water by trucks.

The day marks a turning point in the consideration by the public authorities of this intense climatic phenomenon, with serious statements by the Prime Minister on Friday morning.

Elisabeth Borne worried that this drought – “the most serious ever recorded in our country” – continues, even becomes “even more worrying”.

To better coordinate the action of the public authorities, it has activated an interministerial crisis unit. “Technical meetings” began Friday morning.

They must make it possible “to ensure regular feedback from the prefects of the departments of the most affected areas, to anticipate the possible activation of the ORSEC + water + plans for the agglomerations concerned and to coordinate the necessary civil security measures ( municipal water supply, delivery of drinking water, etc.)”.

The first agricultural union FNSEA asked this unit on Friday for “immediate support for farmers through cash flow measures” and the establishment of “priorities” oriented “clearly towards food production” for the use of water. .

The federation was worried about the autumn harvests: “the corn is roasting on the vine, the beets have dried up and the potatoes are rickety”.

The crisis has been simmering for months in certain regions, where drought decrees have multiplied since the spring, due to lack of rain.

In mainland France, 93 departments out of 96 are subject to water restrictions to varying degrees and 66 are “in crisis”.

The tourist town of Colmar, which enjoys a “four flowers” label, for its part announced on Friday that it had requested an exemption from the Haut-Rhin prefecture to be able to continue to water its flower beds, while the department is making the subject to restrictions.

The French Office for Biodiversity has been responsible for verifying the application of the restrictions: “we are at just over 4,000 checks in recent weeks”, of which 15% “have given rise to findings of non-compliance and about half result in criminal proceedings,” according to Mr. Béchu.

By mid-August, “it is very likely that this drought of the soil will worsen further in a large number of regions”, warned Friday Météo-France, which expects a further rise in temperatures from Sunday.

“At the national level, since July 17, France has set a new record for soil drought every day (on a history that begins in August 1958)”, notes Météo-France. July 2022 was the second driest month ever recorded in France, after March 1961.

On Friday, heat-related power outages affected part of the city of Lyon and some neighboring towns. 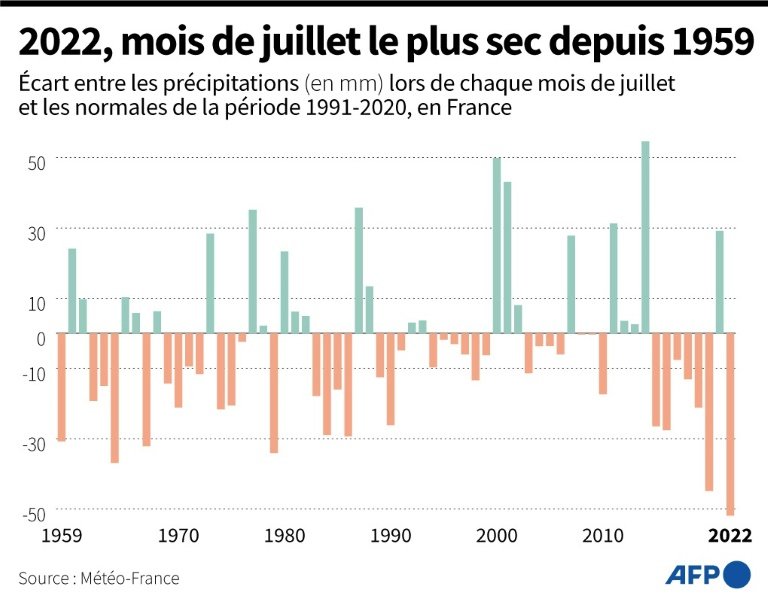 “We are on a major event, which can easily be compared to 1976 or 2003”, according to Jean-Michel Soubeyroux, climatologist at Météo-France.

Consequence: with more than 47,000 hectares burned since the beginning of the year, France experienced a record number of burned areas in July, according to the European Forest Fire Information System (EFFIS).

Pipes and dry crops: the government caught up in a historic drought