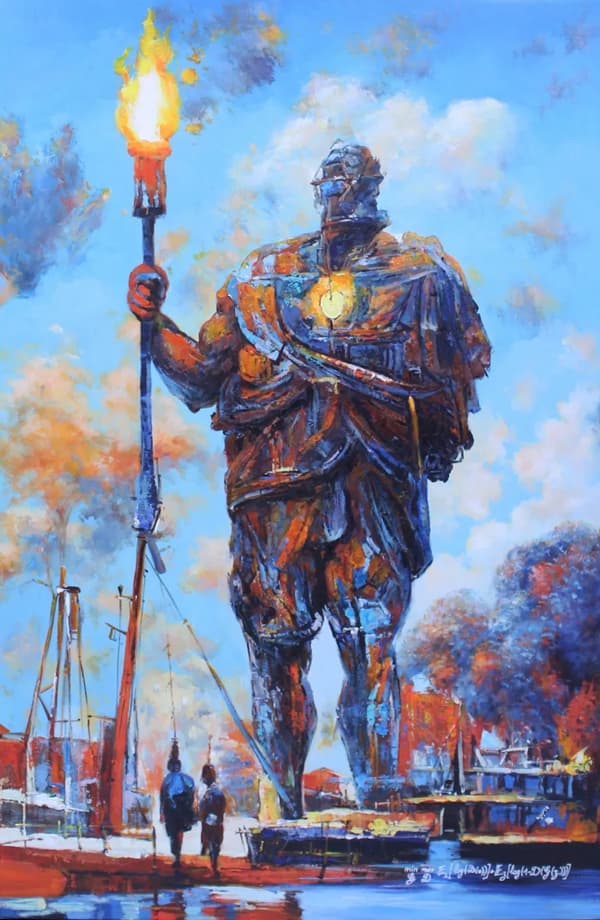 The Obvious collective, a French pioneer in the creation of works of art by artificial intelligence, presents its new series of paintings inspired by the seven wonders of the world, at the Danysz gallery until January 14.

artificial intelligence which have invaded social networks and are competing with Google searches, will they soon take over art galleries? In any case, they have put their foot in the door, thanks to the Obvious collective: the French trio, a precursor of artistic creation based on algorithms, is exhibiting its new “7.1” series until January 14, inspired by the seven wonders of world, at the Danysz gallery.

After the portraits of the Middle Ages and Japanese prints, the collective therefore tackled the lighthouse of Alexandria and other hanging gardens of Babylon. “With a historian, we consulted ancient texts which described the appearance of these seven wonders”, explains Pierre Fautrel, member of the collective alongside Gauthier Vernier and Hugo Caselles-Dupré.

“Then we used it to create our prompts”, these sequences of words that allow artificial intelligences like Midjourney or Stable Diffusion to generate images. Colossus of Rhodes, pyramid of Cheops and temple of Artemis thus take on a fantasized form, resulting from the marriage between the imagination of human artists and the science of algorithms.

Finally, the trio worked with copyist painters to give tangible form to these digital images, in the form of oil on canvas. “A physical rendering to which people can more easily relate”, notes Pierre Fautrel.

But physical does not mean fixed. By scanning the paintings using an app, visitors can experience extended, animated versions in augmented reality, which can be explored by moving their smartphone around the image. Augmented versions that are sold as NFTs, a sector in which the collective is also pioneering – their first works were sold on the blockchain in 2018.

“The revolution is on”

This art exhibition by AI is one of the first in the world to be held in an international gallery, but the Obvious collective is not at its first attempt. In 2018, the trio sold a canvas created by IA, the Portrait of Edmond de Belamy, for $430,000.

Pierre Fautrel insists: “Creating with algorithms is not just ‘I press a button and it generates itself’.” Behind each painting, “several thousand images” have been generated. Obvious even chose to start the series from scratch three times, due to the appearance of new, more efficient AIs.

“As we are geeks, we like to always have the latest toy,” laughs Pierre Fautrel.

It must be said that the techniques have evolved enormously since the time of the Portrait of Edmond de Belamy. The number of text-to-image algorithms has exploded in recent months, as has their performance and accessibility.

“The revolution is already underway”, abounds Magda Danysz, owner of the gallery. “It is therefore important that these artists, who are clearing new ground, feel supported and accompanied in their practices.”


We have our social media profiles here as well as additional related pages here.https://yaroos.com/related-pages/