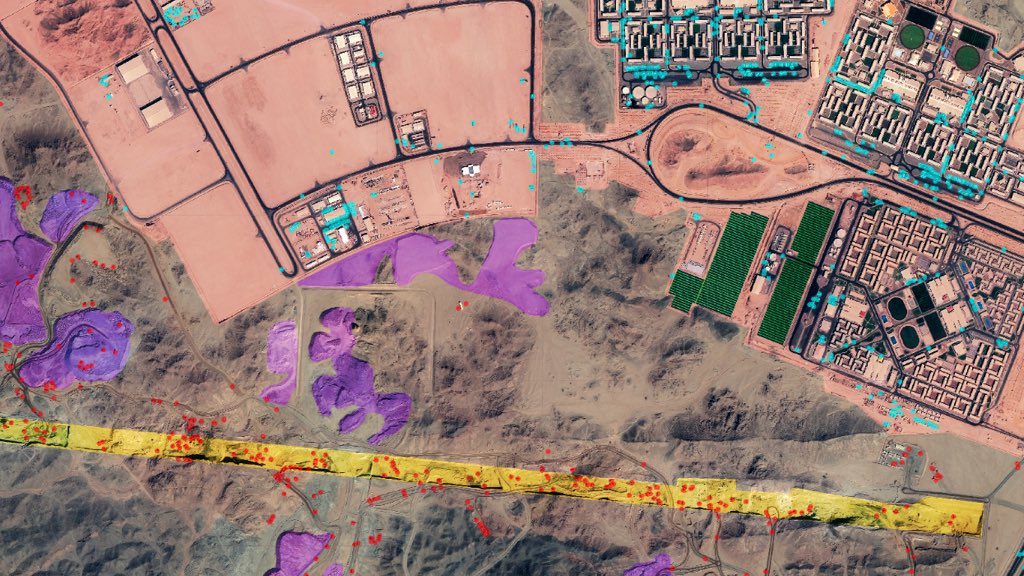 Share the post “Mirror Line: the pharaonic real estate project is starting to come out of the ground”

Extraordinary, this Mirror Line project is so in many ways. In Saudi Arabia, a huge real estate bar, true linear city 120 km long, should be inaugurated in… 2030. If the countdown seems tight to meet these deadlines, it is not for lack of already busy preparing the foundations in the middle of the desert. The proof: the first traces of Mirror Line are already visible from spacerevealed the Parametric Architecture site.

Indeed, the first satellite images provide a glimpse of excavation vehicles, tiny little dots highlighted in red, working on the area. It is estimated that they will have to move at least 1.7 million cubic meters of rock and sand. This is what will be necessary to define the foundations allowing to build The Line afterwards. These two huge bars of parallel buildings spaced 200 meters apart will be nearly 490 meters high. They will stretch ultimately over more than a hundred kilometres.

Artificial intelligence to build The Mirror Line in modular architecture

To create the plans for this vertical and linear city, artificial intelligence (AI) will be widely used. NEOM, the company behind the project, has announced that it will use “extensively artificial intelligence in order to digitally create the twin backbone”indicated the executive director of the firm, Giles Pendleton at ArabianBusiness.com. And to add: “We have to build a huge real estate project in a short period of time. In fact, we don’t really build The Line. We assemble it from modular parts that are prefabricated and whose functions are predetermined” by AI.

“If we need 100 million modules, then it’s easier to create a factory to manufacture tou these blocks at the same time. We are going to define a very simple process with optimized, standardized and industrialized production whereby things are made in large-scale factories within NEOM – so that we don’t have to transport them far. Think of it like a giant assembly kit. The great thing about pre-made parts is that you can control the quality and the dimensions, so things connect. »

Drone photos to better measure the scale of the construction

In October, the company OT Sky sent its drones to photograph the site, which is beginning to take shape. The result is images that show that construction companies are already working to ensure that extremely tight deadlines are met.

This pharaonic project is a huge challenge for Saudi Arabia. If it actually sees the light of day as advertised, The Mirror Line is expected to create some 380,000 jobs and could add $50 billion to the country’s GDP, according to estimates. And this one-of-a-kind city could accommodate up to 9 million people within it.

In addition to housing, The Line is also a real challenge in terms of infrastructure. The goal is to allow travel from one end of the city to the other in just 20 minutes. How can this tour de force be made possible? NEOM plans to set up a fleet of flying taxis and a high-speed train. As for the carbon footprint of this extraordinary real estate challenge, no figure. But it is nevertheless planned to supply the modules with renewable energies. And to integrate many green spaces within the city, in order to bring a little freshness… and nature in this excessive real estate project.

Mohammed bin Salman, chairman of NEOM’s board of directors, is full of praise for the gigantic project. “The modular designs revealed today for vertical city building will challenge traditional flat, horizontal cities. They will create a model for the preservation of nature and the improvement of human habitability. » According to him, this principle makes it possible to have a much smaller footprint than conventional urban areas.

Share the post “Mirror Line: the pharaonic real estate project is starting to come out of the ground”

Mirror Line: the pharaonic real estate project is starting to come out of the ground – WE DEMAIN