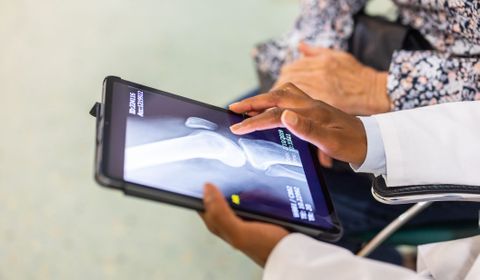 Common pathology, osteoarthritis evolves gradually and at the beginning of the disease, treatments and examinations are useless, simple rules of hygiene and diet may suffice. Finnish researchers therefore had the idea of ​​developing an artificial intelligence capable of detecting early osteoarthritis of the knee. Explanations.

Osteoarthritis is a widespread joint disease and represents a real public health problem. One of these preferential locations is the knee, we speak of gonarthrosis. Faced with this widespread rheumatism, Finnish researchers wanted to develop very early detection, based on an artificial intelligence algorithm.

Identify a peak on the tibial tuberosities

The authors of this work have therefore developed an artificial intelligence model based on X-ray images. “The goal of the project was to train the AI ​​to recognize an early feature of osteoarthritis from an x-ray. Something experienced physicians can visually distinguish from the image, but cannot be done automatically“, explains Anri Patron, the researcher responsible for developing the method.

In practice, the AI ​​tries to detect whether or not there is a spike on the tibial tuberosities of the knee joint, as it can be a sign of osteoarthritis, or at least considered as such by orthopedic specialists. .

A reliable model in nearly 90% of cases

The successful development of an AI model from plain x-rays of the knee is important because they represent an easily performed routine examination and one of the main ones performed to make a diagnosis of osteoarthritis. “Around 700 x-ray images were used to develop the AI ​​model, after which the model was validated with around 200 more x-ray images. The model managed to make an estimate that was in line with that of the doctors in 87% of cases, which is a promising result.” further adds Anri Patron.

Objective: to slow down or even stop the disease

The advantage of such early detection of the disease would be to avoid costly and heavy examinations and treatments for the patient, such as MRIs or knee arthroplasties, or even the fitting of a knee prosthesis. This AI model is not yet routinely tested, but it seems very promising and could tomorrow be directly accessible by general practitioners.

“If we can make the diagnosis at an early stage, we can avoid uncertainty and costly tests such as MRI. In addition, the patient may be motivated to take steps to slow or even stop the progression of symptomatic osteoarthritis. In the best-case scenario, the patient could even avoid a joint replacement“, summarizes Juha Paloneva, co-author of this work.

Making an early diagnosis would allow appropriate care as soon as possible (in particular through lifestyle and dietary measures such as weight loss) to slow down or even stop the disease.