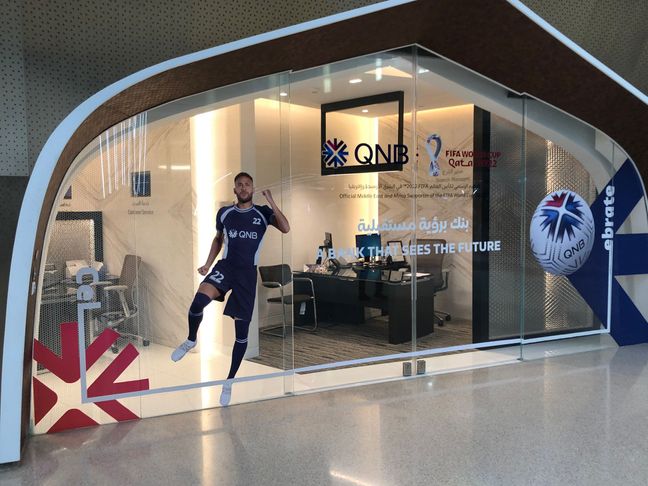 From our Special Envoy in Doha,

Kyky, at home in Doha? In the many months leading up to the contract extension of Kylian Mbappe at PSG, owned by Qatar Sport Investment, this was one of the concrete arguments put forward by the media specializing in the mysteries of the Parisian club: it was out of the question for the small emirate to let its nugget slip away to Real Madrid, this one being supposed to be the bridgehead of Qatar and its Winter World Cup. Arriving in Doha a week ago, we imagined seeing the face of the kid from Bondy displayed all over the capital.

However, from what we had seen so far, it was difficult to find the slightest trace reminding us that the French striker is a local pride. The only Parisian face that can be seen here is that of Neymar, muse of the Qatar National Bank, which is displayed almost everywhere, from the advertising screens installed in the metro trains to the buildings that populate downtown Doha. One wonders what the player thinks about it, who we know is very attentive to his image. Basically, does he really mind being squeezed by his employer, especially after the media campaign Qatar has been the subject of in recent months? Not sure at all.

An anomaly when we think back to the pride of Nasser Al-Khelaïfi, on the verge of hula-hooping on the stage of the Parc des Princes when the announcement of the extension of the French in the French capital. To find out for sure, we still decided to go on an expedition in search of “Mbappé mania”, the PSG Hechter jersey on the back to attract customers and facilitate contact with the hypothetical local supporters of the French club and of his number 7.

“But where are you the French? »

First astonishment when leaving the Mshereib metro station, a sort of local Châtelet-les-Halles, less the smell of urine and more fountains illuminated by multicolored projectors, not the slightest sign of a Parisian or French jersey, and therefore no Mbappé jersey. Around us, progressing towards the Souk Al Wakif, both places of life for Qataris and nerve center for supporters of the World Cup, not far from the famous corniche which overlooks Doha Bay, thousands of fans from all countries but not a single Frenchman. And that’s not a way of speaking, not a pelo.

In traditional dress, a cigarette in his mouth, a Saudi challenges us: “But where are you the French? There are all the countries represented, look, Colombia, Argentina, Brazil, Morocco, Cameroon, but you? “. We answer him that we are there, us, but that indeed it clearly lacks a blue jersey. But this is not our subject, thank you sir, we will continue our investigation without concession.

Finally, at the bend of a street, who do you come across? On Clément d’Antibes, his rooster in his hand, responding in very bad English to a Qatari journalist who must be wondering who this funny character is, carrying around with the evening meal under his arm. We take the opportunity to ask him the question of the (non) hype around Mbappé. The subject does not seem to fascinate him more than that and we even suspect him of answering us “he is the best player in the world! » so that we can then reverse the roles and point the microphone under our muzzle.

So here we are caught in spite of ourselves in a report for the Al-Kass Sports Channel, questioned about the welcome we have received since our arrival. Very good, thank you sir, but we still have a story to complete and the investigation is stalling. The colleague, whom his cameraman describes as “an icon” among Qatari journalists, ends up telling us about a shop where we could find a Kyky shirt. “I know Nasser, I can talk to him about you, he laughs before warning us: “the PSG is Qatari, not French! “.

Qataris fans of the Premier League and La Liga

A few minutes later, luck finally turns. (Fake) PSG jersey from the Canal+ era on the shoulders, Ahmed walks quietly with a friend dressed in the traditional Dishdasha. We are finally going to have the beginning of an answer. “If Mbappé is loved in Qatar? Yes of course. We did not spend 500 million euros not to support him! he laughs. But beyond the financial aspect, what does he think of the player? Not much we understand. If he welcomes the extension of the player in Paris, it is above all for the pleasure of “seeing Florentino Perez cry “.

He supports PSG and Mbappé because he has to, it is the property of the emir anyway. But he only watches a few matches of the Parisian team. “PSG-OM, PSG-Lyon, that’s all. I mostly watch the Premier League, I watch all the matches. I’m a Manchester United fan! “, he enthuses (finally). Next door, his friend, a Qatari too, supports… Manchester City. A heresy when you know that the Skyblues are the property of the United Arab Emirates, historical enemies of Qatar, despite the recent diplomatic warming between the Gulf countries. I promise, we’ll keep this to ourselves my friend.

Going down to Doha Bay, three Qatari friends, Omar, Abdullah and Hussein stroll along the ledge. None are PSG fans but all say they love the player. When asked if they saw the Blues match on Tuesday, the pouts speak volumes. “Mbappé scored two goals, no”, asks one of them. Missed, only one. The extension of the French at PSG? They validate it above all for the humiliation of Real that it has generated. Ah, yes, the three friends are Barça fans.

We got dozens of answers like that during our trip. No real fan of Mbappé or PSG among the locals. Without going so far as to say that it gives off a trend, there is still a bit of that. It’s 4 pm, the sun is already not very high in the sky and it’s time for us to get back to the metro and go to training for the France team. On the way, we try one last shot. Placed quietly on the terrace of a café, also dressed in the Dishdasha, a boy in his thirties answers us. “Oh yes, I love Mbappé, what he does on the pitch is just incredible! For us in Saudi Arabia, Mbappé is a real star, ahead of Messi, Ronaldo or Neymar. Ha yes, a small detail that is important, Ammar is Saudi…

In search of “Mbappé mania” in the streets of Doha