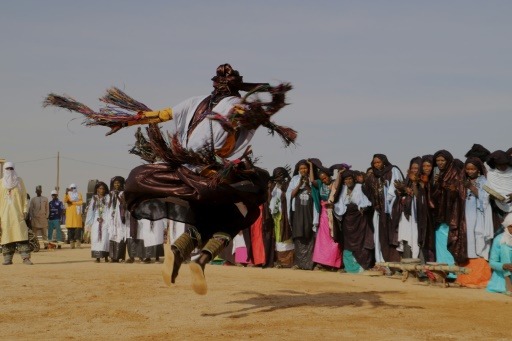 Neither the jolts of the pick-up slaloming on the Saharan tracks of northern Niger, nor the dust gradually browning his turquoise blue coat, tainted the joy of El Gondj Ahmed when the lights of the oasis of Iférouane appeared in the clear night.

The deputy-mayor’s convoy had finally arrived in his village nestled between mountains and desert two days before the opening of the Aïr festival, one of the main events in the Sahara and a great rout of the Tuareg nomadic culture which took the name of the majestic surrounding mountain range.

1,200 km from the capital Niamey, the Iférouane citadel became for three days, beyond the Tuaregs alone, the tourist showcase of an entire country threatened on almost each of its borders by the war waged by the jihadists.

Some 5,000 people, mostly local VIPs and a few foreigners, have replaced the calm of the desert and the nonchalance of its inhabitants with a charivari of 4×4 vehicles, each raising more dust than the others.

Concerts and beauty contests were followed by long hours of discussion lying on mats to the rhythm of glasses of tea, a permanent praise of the virtues of Toyota pick-ups and above all a barely hidden regionalism. “The Tuareg culture, what”, smiles the young Mohamed Bouhamid, resident of Iférouane.

If there weren’t so many soldiers around, we could think we were twenty years back, when the tourist manna constituted a large part of the largely informal economy of these desert regions and when those who became the leaders of the rebellions were still tour guides.

Niger was like Mali a popular destination in West Africa. An airline went directly from Paris to Agadez, Gao, Kidal… The Paris-Dakar traveled through this desert for a long time.

The fantasy of this era remains, and Niamey wants to take advantage of it despite past rebellions and now the metastatic jihadism that is invading the Sahel.

After the assassination of six French people in 2020 a few km from Niamey, France, once the main supplier of tourists, declared Niger a “red zone” and “strongly discouraged”. To those wishing to come to Iférouane, Paris has ordered to postpone this trip “of the most risky?.

Deputy Mayor Hamadi Yahaya rails against “these embassies” which “have installed psychosis” while the conflict is more than 1,000 km from Iférouane. The superior, “the Honorable” as everyone calls him, hammers him: “everything is secure here”.

In addition to soldiers in places as numerous as festival-goers, dozens of Ishumar, the name given to former rebels, “have been posted in the surrounding desert”, adds the former guide who became leader of the rebellion, Rhissa Ag Boula, today adviser to President Mohamed Bazoum.

During the journey to Chiriet, gateway to the Ténéré dunes where part of the festival took place, their pick-ups with the recognizable white pennant were discreetly posted in the distance. They framed the journey transformed into a manly-looking race between some 80 drivers spinning at full speed in the sand.

Méchoui was served there and electric guitars echoed over the pink dunes – the second highest in the Sahara according to local rumour. “It’s like playing at home”, says musician Oumara Moctar dit Bambino: this desert is “where we were born, where we grew up, it reminds us of where we come from”.

The Italian director of the Société Voyages Sahariens (SAS) agency, Rocco Rava, is returning to these dunes for the first time in fifteen years. He grew up in Agadez, the regional capital, and developed his tourist activity there before moving to neighboring Chad when the “turbulence” took hold of Niger.

“There is a strong demand,” he said, explaining that he had come to study the advisability of bringing tourists there. But the situation is paradoxical, he says: “if it’s really secure, tourists ask us why we have to have a military escort”.

Niamey imposes on any Westerner going to the desert an armed and paying escort. “In which country in the world do we do tourism with a machine gun in front and another behind?” Asks another tourist actor anonymously.

We must accept that the era “before” is over, says the president of the collective of artisans of Iférouane Kader Hamadédé, thirty years of jewelry making on the clock. Still, “the tourism we will have now will always be with the military, and I don’t know if that interests tourists…”

Too bad: if they no longer come to him, he will go to them! Capitalizing on his contacts, Kader Hamadédé has reversed the order of things and goes to France every year to sell jewelry and Tuareg tanned leather. “We are forced to seek to liquidate our stock elsewhere than here,” he said.

Leaving seems to be a credo shared by many: migration and gold panning have been the watchwords of northern Niger for several years. Mohamed Bouamid, 22, leaves for four months to dig the deep wells of the Saharan gold panning sites hoping to find his fortune: “There is nothing more to do here”.

In search of lost tourism in the Niger Sahara