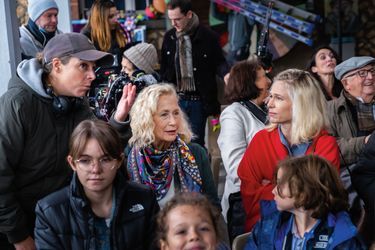 From Rouen to New York, we followed Noémie Lefort on the set of “My heroine”, where the young filmmaker seeks to meet the star of “Pretty Woman”.

Noémie Lefort or the desire to believe in a fairy tale, at all costs… At the end of October 2021, the Covid is still blocking international borders. The young woman and her team have bet on a relaunch of flights to the United States and are holding their breath. In extremis, the White House confirms the lifting of restrictions for November 8.

That very morning, everyone is on the plane. This will be the first post-pandemic shoot to take place in New York. The kind of stories you only see in the movies. “I’m living a sort of waking dream,” enthuses the director who, in addition to Julia, has a passion for the American megalopolis.

It is in the middle of Times Square, in a Big Apple with streets still almost deserted, that we find Noémie Lefort forty-eight hours later, all smiles, headphones on. In a reduced team, she rehearses a scene with her actresses Pascale Arbillot and Chloé Jouannet. She connects the takes in the middle of onlookers taken aback to see a film being shot again. French moreover.

In life and on screen, lifelong Julia Roberts fan

Until then a journalist and producer of film content, she has always dreamed of the big screen. Her first film, “My heroine”, is also her own story, that of a post-teen, a lifelong fan of Julia Roberts, who will cross the Atlantic to go and propose a screenplay she wrote for the star. She had already made a short film, “Calling Julia”. But this time place in the long format.

A film story that even convinced the French subsidiary of the Universal studio to support her in her project worthy of Hollywood romantic comedies of the 1990s. With Fadette Drouard, her co-screenwriter, she nevertheless explores a theme other than autobiography, that of passing on between generations… “I want to tell the relationship between a mother and her daughter who, at a point in their lives, no longer understand each other,” she explains. The memory of a beloved grandmother and a good friend aunt. To portray three generations of women who will have to jostle to find each other. »

A few days later, Noémie Lefort planted her cameras on the rooftop of a trendy hotel in SoHo. Between two direct from “Dancing with the stars”, Chris Marks made the round trip to New York for her friend Noémie to choreograph a sequence where the three women finally meet. To the sound of Kiss’ hit “I Was Made for Lovin’ You”, the dancers perform this choreography with actresses Chloé Jouannet (daughter), Pascale Arbillot (mother) and Louise Coldefy (aunt).

Noémie is proof that you have to believe in your dreams

In a corner of the set, a woman observes the shooting. Thea de Sousa was in 2001 the assistant of Julia Roberts, the one who received the young Noémie and her screenplay. “We very often had proposals from strangers who wanted to propose a film to Julia, she recalls. On the phone, Noémie tells me her story, tells me that she can take the plane the next day to come and meet me in New York. Of course, I didn’t believe her. But a few days later she was there. I thought to myself that I had underestimated this girl! So I decided to take it. We then stayed in touch. To find myself today on the set of his film is amazing. Noémie is proof that, whatever happens, you have to believe in your dreams. Even Julia, to whom I told all this, was impressed by her will. And flattered. »

The next morning, a scene is filmed on a street in Greenwich Village on the panoramic roof of a tourist bus. “I like this idea of ​​a portrait of women without a love story, from which the men are almost absent,” notes Louise Coldefy. Pascale Arbillot says, for her part, to have been seduced by this story “a mixture of essential dreams and lost illusions. The film tells how we live with our cracks. In this, the character of Alex, double of Noémie, represents for Chloé Jouannet “that of the three who is, in the end, the most mature and the most docile”.

The producer, Matthieu Zeller, watches the scenes follow one another on this New York sidewalk, almost without believing it. In other times, he had worked at Lancôme and produced an advertisement for the brand with, as muse… Julia Roberts! You can not make that up. “Even if the film economy is tight,” he recalls, “we wanted to shoot here, with resources and a CinemaScope image. Yet we didn’t know until a few weeks ago, when we started filming, if we could finish it here in New York. »

It is indeed in Rouen, the birthplace of the director, that the first part of the film was shot, consisting of flashbacks. There appears Brigitte Fossey in the role of the protective grandmother. “I found the scenario so well written that you could think it was imaginary. It’s very romantic. And I made friends with Noémie. I love her lively, sparkling side and her truly extraordinary determination. »

Between two takes, the actresses confide, too, about their hidden desires, their youthful ideals. Pascale Arbillot admits that she keeps a letter that she never dared to send to British filmmaker Mike Leigh, with whom she would nevertheless like to work.

And Brigitte Fossey remembers: “As a teenager, I was a fan of Paul Newman. I had his picture on my bedside table. I knew that one day I would meet him, much to the chagrin of my mother who made fun of me. Years later, I befriend Robert Altman. He offers me one evening in Chicago to come and have dinner with an actor for a film project where I should play his wife. I had dinner with Paul Newman. You see, you always have to believe in your dreams! »

In search of Julia Robert, Noémie Lefort (“My heroine”) “is living a waking dream”