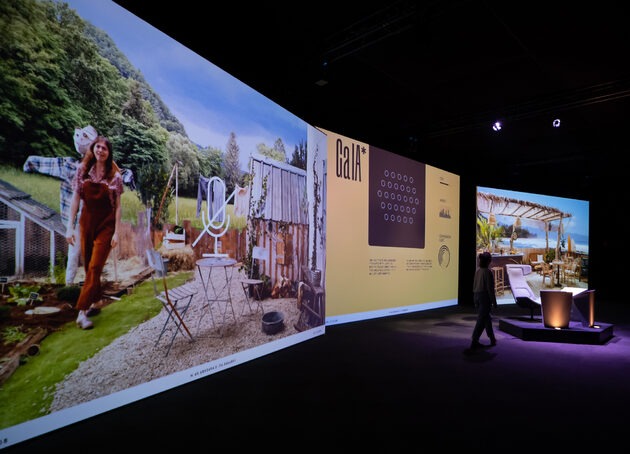 Since December 3 and until May 8, 2023, Cap Sciences offers “Heat the atmosphere, not the planet”. This interactive show asks the public in a playful and humorous way about the challenges of global warming and the obstacles that prevent us from acting, by inviting everyone to roll up their sleeves. A highly recommended creation, accessible from 10 years old.

Gaia first selects one person from the audience. “Randomly”, says the female voice of this artificial intelligence software. This Friday, December 2 at Cap Sciences, for the Bordeaux premiere (and even French, after having been programmed in Brussels) of “Warm up the atmosphere, not the planet”, it therefore falls on Camille, to the great despair of the young woman.

Her annoyance (feigning, of course, she’s an actress) increases when, once installed, the computer unpacks its thoughts on giant screens – “compliance with the RGPD (regulation on the protection of personal data, editor’s note), Does this ring a bell ? “. He explains more precisely his dilemma of the moment: for the next vacation, will she go learn about permaculture on a farm an hour by train from home, or sunbathe in the Canary Islands?

Fucked up or can we still act?

Obviously, the carbon footprint of the second destination, which must be reached by plane, is much more substantial : nearly 500 kilos of CO2 equivalent, i.e. a quarter of the annual emissions to which each French person should adhere to comply with the Paris agreements.

“Why deprive me of the Canaries when it’s screwed? (to contain global warming to 1.5° since the beginning of the industrial era, the objective of this agreement, Editor’s note), Camille wonders, however.

Does the public think like her? The 4th grade students from Ausone College, at Bouscat, present in the room that morning, grabbed the remote control fitted to each seat. They vote at 72% “we can still act”.

Then follows to convince Camille a short video of a scientist on the increase in global warming – “+1.1° since the industrial revolution, much more than during the 100,000 previous years”, but also the imperative need to contain each tenth of a degree to prevent the climate system from racing – for example in France the frequency of heat waves should double by 2050, or be multiplied by 5 if the increase in emissions continues.

The sequences are linked together during the 45 minutes of the show. The heroine’s tugging and questioning are embodied by her friends who are arguing through interposed screens, one, her eco-friendly and leftist friend from the permacole farm, the other, a clumsy friend in a Hawaiian shirt, in a bar on the beach. . The public and experts are called upon to decide between them, and to help Camille see clearly the responsibilities of each.

“Faced with the vital challenge of climate change, the inaction of our societies remains glaring and calls to mind: why don’t we act more? asks Vincent Jouanneau, project manager at Cap Sciences – co-producer of this show with the Belgian agency Tempora and the association Climate Voices. He cites several obstacles, identified in European countries:

“We know the brakes. Either we tell ourselves that we are going straight into the wall and that it is useless. Either we reject the fault on the others, by affirming that the French do not emit that much. Either that citizens can not do much, and that decisions are only the responsibility of states and large companies. »

Clichés that “Warms up the atmosphere…” defeats, with supporting data. For example, China is the country that pollutes the most, but compared to emissions per capita, much less than a Qatari or an American. And its liabilities are less than the Europeans or the United States if we take stock of the last 200 years.

The rich are destroying the planet

Above all, the richest 10% of households account for nearly half of total greenhouse gas emissions, due to lifestyles pushing for ultra-consumption (of travel and material goods). “You are part of it, according to the credit card data used to pay for the show tickets”, tackles Gaïa.

It is therefore, she affirms, changing our lifestyles that we must tackle, more than birth control or possible technological breakthroughs.

Starting with our individual gestures, whose impact is not negligible. A few concrete avenues put forward during the post-show and a quiz with the audience. It is recalled, for example, that vegetarian meals represent 7 kilos of greenhouse gases per week, compared to 65 kilos for meals with meat.

To guide the youngest in their daily acts of consumption, they are shown the impact of fast fashion or their use of digital, and ways to reduce the carbon footprint of their phone. And for those who want to go further and get involved, local associations and movements are presented to them at the exit of the room.

“This atypical object for us is not moralizing, believes Emilie Gouet-Billet, of Cap sciences. We’re not here to tell people what to do, but to push them to think, and interest young people who study it at school, with a rather funny and engaging subject. This is the mission of a scientific centre”.

“It was stylish, loose Ilona. There are things that we already knew, others that we measure better. But we are already trying to change our habits. I have reduced my meat consumption, I only eat it once a day”.

Go, still a little effort to work twice as hard.

“Warms the atmosphere… not the planet”

Wednesday, Saturday and Sunday at 3 p.m. and 4:30 p.m. Thursdays and Fridays at 7 p.m. Additional sessions during school holidays on Monday, Tuesday, Thursday and Friday at 2.30 p.m. and 4 p.m.

In Bordeaux, an interactive show sheds light on our individual dilemmas in the face of climate change