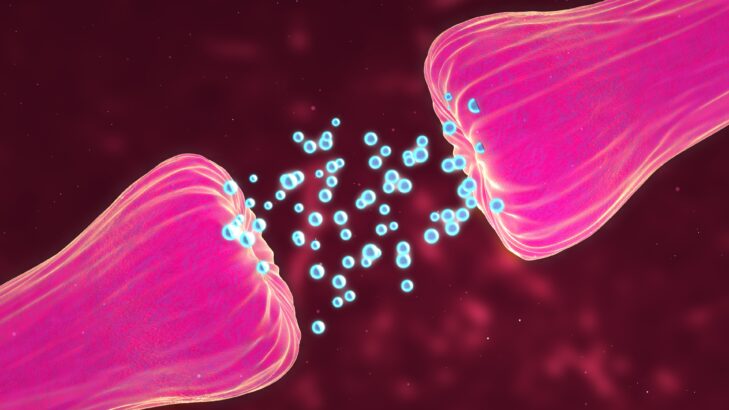 The mammalian brain contains, depending on the species, between 100 million and 1000 billion neurons. The human brain contains an average of 85 billion of these neurons. They are specialized in the transmission of information to other nerve cells, but also to muscle cells or to exocrine and endocrine cells.

Typically, a nerve cell or neuron consists of a cell body containing the cell nucleus and the various cell organelles. One end of the neuron has dendrites in the form of a tree which are extensions of the cell body and receive information from other neurons. On the other side of the neuron, the cell body is extended by the axon which can measure a few tens of millimeters up to a meter in certain cases. At its end, the axon branches into many nerve endings to transmit nerve impulses.

In the nervous system, the neurons continuously receive and send messages in the form of electrical impulses that flow from the dendrites to the axon. The majority of axons are covered with a myelin sheath whose role is to accelerate the circulation of nerve impulses. This myelin sheath is made by specialized cells present in large numbers in the nervous system, the glial cells. These cells are important because in addition to making the myelin sheath, they transport nutrients to neurons and eliminate cell debris.

The passage of nerve impulses is based on the opening and closing of ion channels crossing the plasma membrane of neurons, allowing the entry and exit of ions selectively. It is this flow of ions that creates an electric current. The passage of nerve impulses from the dendrites to the axon creates a reversal of the electrical potential of the cell membrane. This is the action potential or nerve impulse that travels at high speed from one nerve cell to another.

When this nerve impulse reaches the end of the axon, called the synapse, it triggers the release of a chemical molecule called a neurotransmitter which flows into the synaptic cleft and then binds to receptors on the other neuron or on a muscle or gland cell. Once fixed, this neurotransmitter alters the action potential on the receptor cell allowing the nerve impulse to continue on its way.

This is not the first time that scientists have tried to develop synthetic neurons. Until now, and even with very conclusive results, attempts have all led to the creation of systems based on electronic circuits making them look like tiny computer chips.

Researchers from the Department of Chemistry and the Department of Biochemistry at the University of Oxford have for their part succeeded in the feat of making synthetic neurons that almost resemble real nerve cells thanks to a hydrogel, designed by an internal process. to the research team.

They are actually aqueous droplets with a volume corresponding to the nanoliter and hydrogel fibers. The whole is held together by lipid bilayers much like the plasma membranes of real cells. These soft and flexible synthetic neurons have a diameter of 0.7 millimeters and a length of 25 millimeters. They are still a little big, because a human neuron has a diameter about 700 times smaller.

These synthetic neurons have the ability to release neurotransmitters to allow the passage of a nerve impulse from one synthetic cell to another. The circulation of the electrical signal is ensured by proton pumps made up of protein pores installed in the lipid bilayer and sensitive to light.

As soon as one of these artificial neurons is subjected to light, the proton pump proteins start pumping hydrogen ions which move through the aqueous droplet. This ion displacement creates an electrical signal which propagates to the end of the artificial neuron. The passage from one neuron to another is ensured by adenosine triphosphate (ATP) which “plays” the role of neuromediator.

Just like real nerve cells, these synthetic neurons are capable of both excitability and conductivity!

>> Read also: Nanofluids, an artificial ionic neuron, is it possible?

A synthetic nerve cell in which an electric current circulates is good, but several is much better since it would make it possible to create a real synthetic nervous system. To do this, researchers at the University of Oxford succeeded in bringing together seven synthetic neurons in parallel to create an artificial nerve.

They then attempted to circulate several distinct signals simultaneously in this synthetic nerve. They realized that the signals propagate thus allowing the transmission of spatio-temporal information.

The results of this research are really very encouraging and suggest many applications. For example, researchers would like to be able to use these light-activated synthetic neurons to transport and deliver several types of drugs.

But that’s not all, because synthetic nerves could serve asneural implants new generation, for example in the case of cochlear implants or in the case of artificial retina transplants.

This still remains for the moment in the field of the future since these synthetic neurons must still undergo many improvements such as the permanent and continuous supply of neurotransmitters as in a real nervous system.

Here are the first synthetic neurons capable of transmitting a nerve impulse!