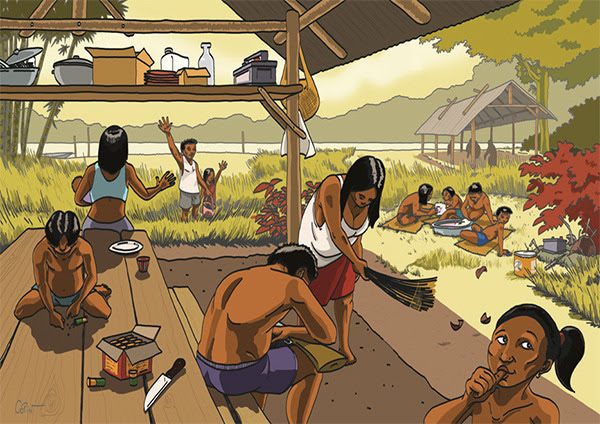 In French Guiana, one child in five suffers from lead poisoning, sixty times more than in France. In addition, in isolated municipalities, mercury impregnation has increased by 25% since 2005 and pregnant women have an average concentration above the standards of the World Health Organization (WHO). Faced with this major public health issue, the Strategy for the reduction of risks linked to heavy metals was launched in April 2021.

For Clara de Bort, Director General of ARS Guyana: ” It is a health and environmental challenge for the future of the territory. A very long-term multi-year strategy, which will occupy our successors for a very long time. But we have to move forward, in small steps, in a pragmatic way “.

The first works illustrate the multiple issues revolving around the problem of heavy metals. In partnership with the customary chiefs of the Espérance villages, researchers have begun, for example, to sample about fifteen different varieties of cassava, in four abattis distributed around Saint-Georges. They analyze them to try to find out what determines the level of lead in each of the varieties. A fifth clearing will be studied in the coming months to see if burning and other agricultural practices have an impact on the level of lead.

Cassava is a good illustration of the difficulties of reducing lead impregnation, as Marine Barizien, coordinator of StraMeLo, points out: “In Metropolitan France, the main source of exposure is old pipes. It’s easy to change them! Here, the sources of exposure are multiple and often food, which complicates the task”. For example, discussions have started around hunting: with gunsmiths to assess the cost of replacing lead with steel shot for small game. Villages, chosen with the Grand Customary Council, will test them to see if they are suitable.

For their part, the designers of the collective The Ink Link have produced several drawings, currently exhibited at the CDPS of Camopi in order to help mediators, health professionals and residents to discuss issues related to heavy metals.

A mobile team to meet the population

Since the end of February and for six months, Léonie Flot, nurse, and Sonia Louis, health mediator, have been working full-time in Camopi on the issues of exposure to lead and mercury. They form the EMLo: heavy metals mobile team. Accompanied by Estelle Jacoud, nurse coordinator in Cayenne, “They help the CDPS organize screening when a child needs a sample. They carry out health promotion actions: meeting with the population to understand the sources of contamination or to inform on how to reduce their exposure to heavy metals”explains Dr. Brice Daverton, referent physician for public health projects for the delocalized prevention and care centers (CDPS).

Guyana: StraMeLo presents the first projects against exposure to lead and mercury