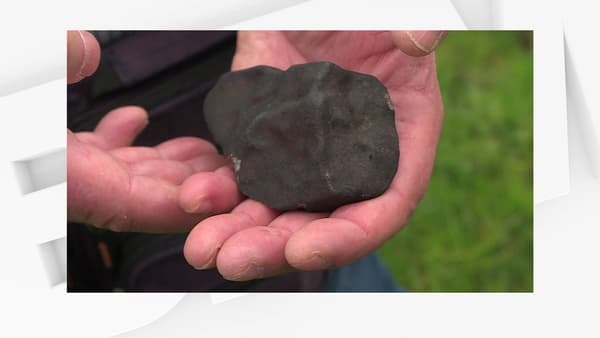 Across the fields or along the highway, teams of scientists and volunteers have been looking since early May for a meteorite “older than the Earth” which crashed in the Orne in April.

“It’s worse than looking for a needle in a haystack, it’s true, but we still have hope!” It has now been almost three weeks since around fifteen scientists, including astronomer Michaël Leblanc, have been combing through the smallest corners of the Orne countryside in search of a small meteorite that fell from the sky on the night of April 16 to 17.

“For the moment, we haven’t got our hands on it yet”, tells BFMTV.com Michaël Leblanc, who organized several scientific hunts, including the very first on April 24. “But to date, we must have searched only 20 or 30% of the search area, so it must still be laid in the grass, somewhere north of Alençon, at Sées (Orne)”.

In mid-April, the luminous meteor had been observed by thousands of people in France, and many internet users immortalized its trajectory. Thanks to some 200 testimonies collected, the scientists were able to gather enough elements to reconstruct its trajectory and (approximately) its point of fall.

The coveted meteorite “fell to the ground that evening like a common pebble”, details Michaël Leblanc. “But it’s anything but that. It’s not normally very big, it shouldn’t weigh more than 500 grams. It’s something very dark, incomparable.

“When you have it in front of you, you know it can’t be anything else! It’s made of fusion crust so it’s almost black, with blisters, as if someone had tried to push his thumbs in.”

“It’s quite laborious work but the search area is quite large and the grass is tall so it’s not easy,” reports the scientific mediator, a passionate astronomer. “We proceed according to a method of scientific hunting, that is to say that we advance meticulously meter after meter, in line next to each other. It requires a lot of rigor so we called on professionals who know about it.” “It moved the world!” laughs the astronomer.

Some young people associated with research

Indeed, highly motivated scientists have come from Rennes, Paris or Lyon to come and look for this famous rock. And at the beginning of April, a handful of young people, aged 15 to 18, also had the chance to participate in the research. This is the case of Hugo Guerlet-Fouquet, 18 years old. The young man, on the path to professional integration at the CEJM (Montjoie day education center) in Le Mans, is a student of Michael Leblanc.

“When our teacher told us about this meteorite, it aroused my curiosity”, explains to BFMTV.com Hugo Guerlet-Fouquet. “So with three of my comrades, we got up early and went walking for 1h30 through the fields with the team of scientists. We were arranged in rows, and we walked headlong in several different directions.

“It was quite exciting, even if it was also a bit tiring, but hey, it’s for a good cause”, continues the young man, who says he is “proud to have participated in research of such magnitude. “.

This meteorite, “older than planet Earth”, would be a valuable discovery for scientists. Michaël Leblanc explains that this 4.6 billion-year-old rock would allow them “to learn more about the formation of our solar system, but also about the frequency and characteristics of meteors that end their trajectory on Earth”

According to him, “it could help answer the questions: ‘what exactly is falling on our planet, and where does it come from?’ We know that it must have been in orbit close to the planet Mars. It is interesting because it could make it possible to validate various scientific hypotheses from a distance”. For the astronomer, getting his hands on this stone would even have a symbolic dimension. “It’s anything but a vulgar pebble, this meteorite has almost a form of wisdom by its age.”

“Everything but a vulgar pebble”: they probe the Normandy countryside in search of a meteorite