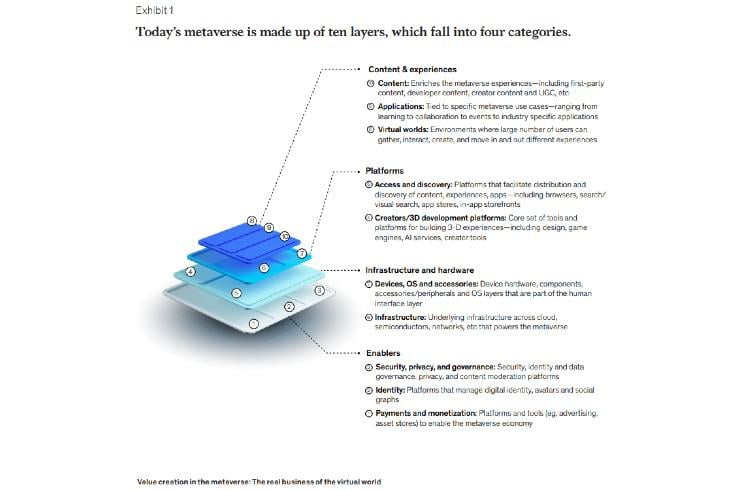 Eric Hazan has held the position of Senior Partner for more than 14 years at McKinsey & Company in the Paris office and is one of the European leaders in McKinsey Digital and Advanced Analytics activities. On the occasion of the last edition of the Vivatech show, the latter presented a report on the creation of value in the metaverse.

After having presented at previous editions of Vivatech reports on the state of digitization in Europe or on artificial intelligence, why did you choose this year to focus on the metaverse?

Eric Hazan: It should already be noted that the main elements that make up the metaverse today have existed for several years. Gaming is one of them and brings together very involved communities. Fortnite, for example, has more than 20 million active users. Associated with the metaverse, NFTs now represent a real economic value of up to $250 million.

In my view, we have just passed the buzz stage with a metaverse that is attracting significant investment: since the beginning of the year, companies, venture capital firms and private equity funds have invested more than 120 billion dollars in the metaverse is three times more than was invested in artificial intelligence in 2016.

We have the right to be skeptical but the amount of investment is such that we just can’t miss it. And that’s what prompted us to conduct this study with 450 business leaders and 3,400 consumers. Just as we anticipated the ongoing disruption caused by artificial intelligence in its early days.

What are the main lessons of your new study?

Our study first reveals that 59% of consumers are excited about transitioning their daily activities to the Metaverse. Similarly, 57% of companies sensitive to this new technology say they are ready to adopt it.

The metaverse is initially intended to attract the general public – in particular through gaming and entertainment – ​​but we are on the way to a broader democratization. Going forward, there will be multiple entry points as interoperability matures. As a result, new use cases will emerge, particularly in the professional context or even e-learning.

Eric Hazan: In a context of the emergence of a new technology, we are always witnessing a phase of “hype”, then of rationalization and finally of take-off. Some uses will explode when others will probably die out

Do you defend an ideal of decentralization to achieve this form of interoperability?

We are not here to take sides but it is true that interoperability would allow us to better analyze the phenomenon. Meta will invest more than 10 billion dollars in the next few years, but this is still less than 10% of what has already been invested in the sector in the first half of 2022. In general, many companies are interested in it: 57% of them are already testing use cases in the metaverse and 25% estimate that this will represent 15% of their turnover within 5 years.

Does the metaverse sign for you the end of physical sales channels?

I don’t think this marks the end of the physical sales channel and that was already what the e-commerce revolution heralded. On the other hand, this will undoubtedly make it possible to deliver a more fluid and omnichannel experience. I believe that the metaverse will be placed more under the sign of hybridization, like connected glasses that will allow us to see both the real and the virtual.

It will be a complementary sales, communication or marketing channel and I think most of the public see it as an opportunity rather than a threat. We are already in a world where digital exists and has an impact in the physical world. These two worlds will always remain complementary.

Bernard Arnault recently said: “We are not interested in selling virtual sneakers for 10 euros. We’re not here for that”, while referring to the speculative setbacks that contributed to the bursting of the internet bubble of the 2000s. What do you think?

In a context of the emergence of a new technology, we are always witnessing a phase of “hype”, then of rationalization and finally of take-off. Some uses will explode when others will probably die out. Once again, it is quite acceptable to be skeptical but in my opinion being reluctant to test is not being on the starting line at the same level as the others.

I think the tipping point will come in two or three years because we are still in the testing phase. But in any case, it must be kept in mind that at the time of the Internet bubble, many turned away from it and those who continued to believe in it actually resisted the Web 1.0 wave better, particularly in terms of e -trade.

There are still plenty of uses that we can’t imagine: aircraft manufacturers are testing maintenance in the metaverse and even construction players are also doing it to optimize their own processes. All of this sounds a lot like the use cases imagined at the beginning of artificial intelligence and my advice to companies is to get started now to prepare for the evolutions to come.

Eric Hazan (McKinsey & Company): “The Metaverse is mostly appealing to the general public today, but we are on the way to wider adoption” – Forbes France