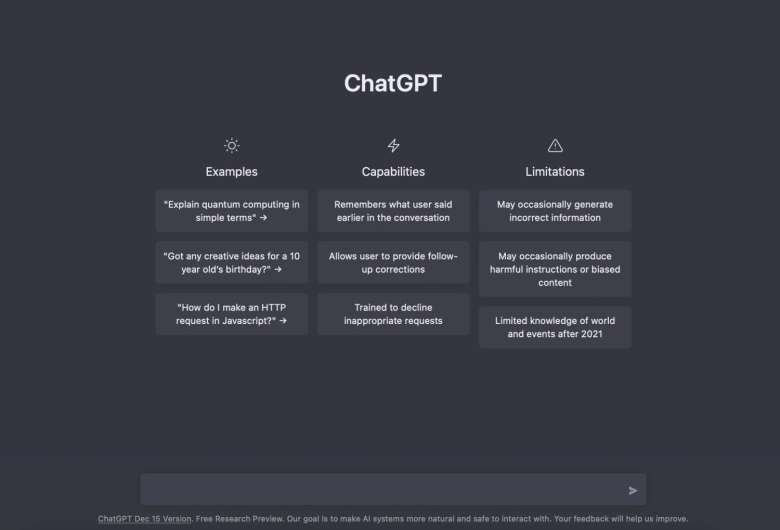 ChatGPT is a new prototype of textual artificial intelligence developed by OpenAI, specialized in natural dialogue with its interlocutor. Its naturalness and its responses, reaching unprecedented levels of precision, surprise all who have tried it. It is capable of answering virtually any question, from writing literary texts to generating usable software code.

Launched in November 2022, in beta version, ChatGPT revolutionizes the understanding of what artificial intelligence means. Not only because of its seemingly endless capabilities, but also because of its ease of use. The possibilities it offers for the future and the impact it will have are felt socially, economically, in work environments, in the way we understand the media and even in politics.

ChatGPT is an artificial intelligence that you can interact with in a conversational format via text, developed by OpenAI. Based on the GPT-3.5 model, it is a significant improvement over the GPT-3 (Generative Pre-trained Transformer 3) model which was already quite revolutionary when it was introduced in May 2020.

This model is based on over 175 million parameters and has been trained on huge amounts of data. As he interacts with humans, more and more information is gathered and used to increase his level of training and thus improve his responses.

Both ChatGPT and other AI systems use an autoregressive language model. That is to say, the point of interest – in this case, in the responses during the conversation – depends on his past observations. These observations can be based on other points of the interaction you are having at the time – creating a sense of context with your conversation partner – as well as any data feeding into your extended knowledge.

All this results in a system capable of giving precise and complete answers. With a very natural language, he responds with precise information. It is as surprising as it is potentially dangerous. In fact, when OpenAI introduced the previous version, GPT-3, researchers warned of difficulties in distinguishing an article generated by an artificial intelligence from one written by a human. This could have potential risks and adverse consequences. In the case of ChatGPT, it is an even more sophisticated model of artificial intelligence, which makes it even more surprising.

Why is this so amazing?

The possibilities of ChatGPT are immense. And what you can ask the artificial intelligence to do during a conversation is practically unlimited. Thousands of examples of responses given by the system have been published. From crafting detailed fictional stories, to funny answers, to newspaper articles, to answers with code in different programming languages ​​to perform simple and not-so-simple tasks.

In fact, ChatGPT can describe itself. When asked the question, she replied: I am a large language model trained by OpenAI. My goal is to help people find answers to their questions and to provide accurate and verifiable information. My ability to process and understand natural language allows me to answer questions on a wide variety of topics, ranging from science and technology to history and culture. I can also help people write texts, give them writing suggestions and correct grammatical errors.“.

” Although I am a virtual entity, I have a wealth of knowledge and experiences to share. My intention is to be a useful and educational tool for anyone who asks me for help. If you have any questions or need help with anything, please don’t hesitate to ask me. I am here to help you. »

And that’s exactly why ChatGPT is so amazing. He leads conversations in a text chat with a dialogue that is sometimes difficult to differentiate from a human. He is able to answer questions on millions of topics, admits his own mistakes, attempts to correct misconceptions, and is even able to reject inappropriate requests.

How to use ChatGPT

The main reason why ChatGPT has such an impact is its ease of use. And that, for now, during its beta phase, its use is free. To start a conversation, just access the website and register, if you haven’t already.

Once connected, you can ask him all your questions. OpenAI presents some sample questions that will give you a first idea of ​​the scope and capabilities of ChatGPT. ” Explain quantum computing in simple terms or quite technical things like asking “how to make an HTTP request using JavaScript”. You can also ask him story questions and ask him to tell you the story in the simplest way possible.

ChatGPT understands English and the way to ask questions or make requests can be completely natural. Here are some examples we’ve tried with surprising results:

But you can go much further. Some consider that, at least in some cases, ChatGPT is able to provide more detailed and higher quality results than Google. He can also write original scripts for scenes from popular series such as Office with extremely surprising results.

So, I just asked ChatGPT to write an original script for ‘The Office’ in which Michael Scott buys a new Tesla, but he doesn’t know how to use it.

The more context the better, because the answer is more specific, or at least closer to what you are looking for. You can indicate the tone in which you want me to write, the language, the type of text you expect. If it’s a short story, for example, you can describe the characters in advance. If it’s the description of a historical moment, ask him to do it in a finite number of words or to focus on a particular character.

In summary. If ChatGPT is so revolutionary, it is not only because of the technology and capabilities that have been achieved through artificial intelligence. It is also because it is accessible and easy to use. And don’t worry, experts believe that we are still far from being aware of it.

ChatGPT: the revolutionary technology everyone is talking about! Find out how it works and why you shouldn’t miss it!