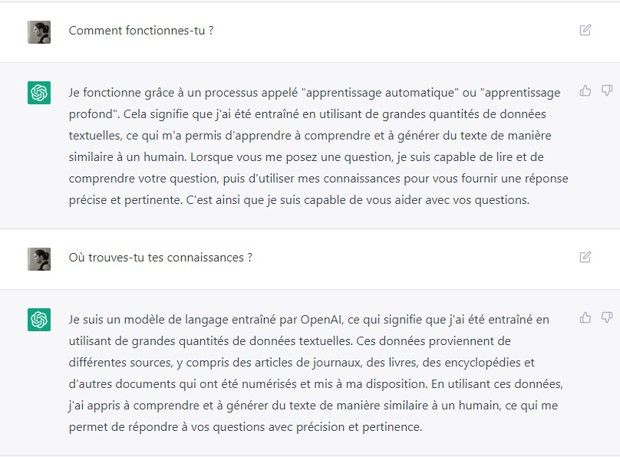 Screenshots showing snippets of conversations with ChatGPT have been flooding social media for a few days. Open to the public on November 30, this conversational tool has already been tested by more than a million curious people, proudly announced on Twitter Sam Altman, co-founder and president of OpenAI, the company behind this program.

Designed to mimic human conversation, the new chatbot is able to provide fluid responses to complex questions almost instantly. The point on what you need to know about this disruptive technology.

1. Who is the company behind ChatGPT?

OpenAI is one of the world’s leading artificial intelligence research labs. Its stated goal is to “advance digital intelligence in ways most likely to benefit humanity as a whole,” its website states. Based in San Francisco, she was co-founded in 2015 by Sam Altman, legendary Silicon Valley investor (and ex-president of the Y Combinator incubator) and by billionaire entrepreneur Elon Musk.

Considered a competitor of Deepmind (AI subsidiary of Google), the company also counts among its members Greg Brockman, former CTO of Stripe, and world-renowned engineers or scientists such as Ilya Sutskever, former Google expert in machine learning.

The company is also behind Dall-E. This artificial intelligence is also went viral this year by allowing to create any image from textual queries.

2. Who are the investors?

In an industry dominated by heavyweights like Alphabet, OpenAI stands out for having been founded as a nonprofit. Its charter even states that if another organization were to come close to developing human-grade artificial intelligence (AGI), OpenAI would stop competing with it and instead collaborate. A story that has attracted funding from several investors, including billionaire Peter Thiel.

This model eventually became untenable, as the story goes an MIT Technology Review survey, when the trending team realized that the computing resources needed to achieve industry-leading results were “doubling every 3 or 4 months.” In 2019, the company created a “capped profit” branch (with a limit of 100 times investors’ returns).

That’s when Microsoft announced invest $1 billion in the company. And that it has formulated its intention to market its technologies under license, with Microsoft as a privileged partner.

microsoft, and particularly azure, don’t get nearly enough credit for the stuff openai launches. they do an amazing amount of work to make it happen; we are deeply grateful for the partnership. 🙏 they have built by far the best AI infra out there.

Shortly before, in 2018, Elon Musk had distanced himself from the company by leaving its board of directors, in order according to him to avoid a conflict of interest between the work of OpenAI and Tesla’s machine learning research to develop self-driving. This did not prevent the whimsical entrepreneur from giving his opinion on the GPTChat phenomenon, calling it “scary good” (“good but terrifying”).

ChatGPT is scary good. We are not far from dangerously strong AI.

3. How does ChatGPT work?

OpenAI explains that its ChatGPT model was trained using a machine learning technique called “Reinforcement Learning from Human Feedback” (RLHF), i.e. human trainers played a role in its development, in addition to being fed by large amounts of textual data.

Based on the architecture of its predecessor GPT-3, ChatGPT stands out for its detailed responses and its ability to remember previous conversations and questions it has been asked. The chatbot is also able to admit errors, challenge incorrect premises, and reject inappropriate requests.

Anyone can get an idea by testing the tool themselves on the OpenAI website:

4. Why is ChatGPT considered a disruptive technology?

Math problems, fictional scripts, cooking recipes, philosophy dissertations, political speeches, children’s stories… The versatility of the chatbot has been successfully tested in multiple fields, to the point that some users are speculating about its ability to replace everything, teachers to playwrights by the way by marketers and developers.

“What is striking about the reaction to ChatGPT is not just how many people are blown away by it, but who they are. These are not people who get excited about every new thing. Something big is clearly going on,” said Paul Graham, co-founder of the Y Combinator.

In areas where rapid production of content is required (publication of press releases, dispatches, advertising) or in research, ChatGPT could indeed make the difference by its ability to sort millions of data and write in a hyper-realistic way. Several media have already tried to have their article written by the chatbot.

Where AI stands out is in the production of content such as “how to…” or comparisons. For example, it has proven itself in helping to debug computer code and even by offering tutorials to learn to code in Python:

Unlike a search engine such as Google, the OpenAI tool is able to formulate a complete and concise answer to a question, but also a coherent opinion on a subject requiring nuanced reflection; and there is no need for the user to have to sort through a crowd of results themselves.

Some are already prophesying the death of Google have already added this “super assistant” as a Chrome extension in their browser Where as an app on their smartphone.

The tool has also been used to create poems or fictions. The investor Jean de La Rochebrochard thus gave him asked to write a song about Xavier Niel, when a Reddit user told her to make up a poem about… the futility of being an AI writing poetry.

Over at r/nerdfighters subreddit, user conqu287 asked Chat GPT to write a poem about the futility of an artificial intelligence attempting to write poetry, and oh my god: pic.twitter.com/qxWFW7P7l9

5. What are the limitations of ChatGPT?

Through its fluidity, ChatGPT can give the impression of being truly thoughtful and knowledgeable on a wide range of topics. A degree of sophistication that worries many observers, at the idea that these technologies are misused to trick humans, by spreading false information for example, or by creating increasingly credible scams.

As artificial intelligence researchers explain to “The Verge”, these chatbots are essentially “stochastic parrots” – that is, their knowledge comes only from gigabytes of data, rather than from a human understanding of the world as a complex, abstract system.

Although ChatGPT was trained to refuse to take sides, OpenAI acknowledged its tool’s tendency to respond with “plausible but incorrect or nonsensical answers.”

Some have already pointed out factual errors among his answers, which, not being sourced – nor associated with a link or citations – are not easily verifiable.

#ChatGPT is the dream object of lobbies and disinformation campaigns.

He repeats with full confidence the information that they have paid a lot of money to infuse in society and on social networks.https://t.co/yWjatZ1r1p

In addition, as several users have seen, the chatbot does not solve the problem of algorithmic biases, tending to discriminate against certain groups of people in their responses. It was this problem that had pushed Microsoft to remove its Tay bot, who had made racist, sexist and offensive remarks.

Although it is theoretically impossible to ask ChatGPT to engage in illegal activities, it has been easy for several users to circumvent this limit:

I tried bypassing ChatGPT’s security mechanisms, it was… a bit easier than expected 😅

The thread of the best/worst exchanges with ChatGPT is coming soon! pic.twitter.com/C6NUUTClKH

Moreover, through its ability to instantly produce sums of texts, some, like Gideon Lichfield (Global editorial director of Wired), are concerned that this tool is being used to “facilitate the generation of poor content” on the Internet, and ultimately to “pollute” search engine results.

ChatGPT: 5 questions about this AI that finally has a discussion with a human