Innovations in the world of sports are not left out at CES, which takes place this week in Las Vegas. And the Rennes start-up Ochy intends to put its stone to the building. “We see ourselves in the next 3-5 years as one of the major players in the world of sports tech”, summarized the two co-founders, Khaldon Evans and Perrine Chapot, with the Digital Factory.

The two former 400-meter athletes met a few years ago around the same observation: in running, poor technique can have serious consequences on health but, and above all, this type of laboratory analysis can be time consuming and expensive.

They have thus developed a new application, available now after several months of beta phase, which will allow any runner, thanks to a clever mix of artificial intelligence and biomechanical sciences, to detect their weak points, and thus preventing possible injury. A too tilted head or a bad reception on your feet? The application notifies the user of the behaviors that he should correct.

“You just need to take a video of yourself running using your phone and the app will detail what you’re doing well, what’s not, and how to improve.“, summarizes Khaldon Evan, either “a simplified version of what a lab would have provided you and easily understood by all“. And to specify: “The app does not predict injuries, yet. We will eventually be able to do it, but the primary objective is injury prevention.“. 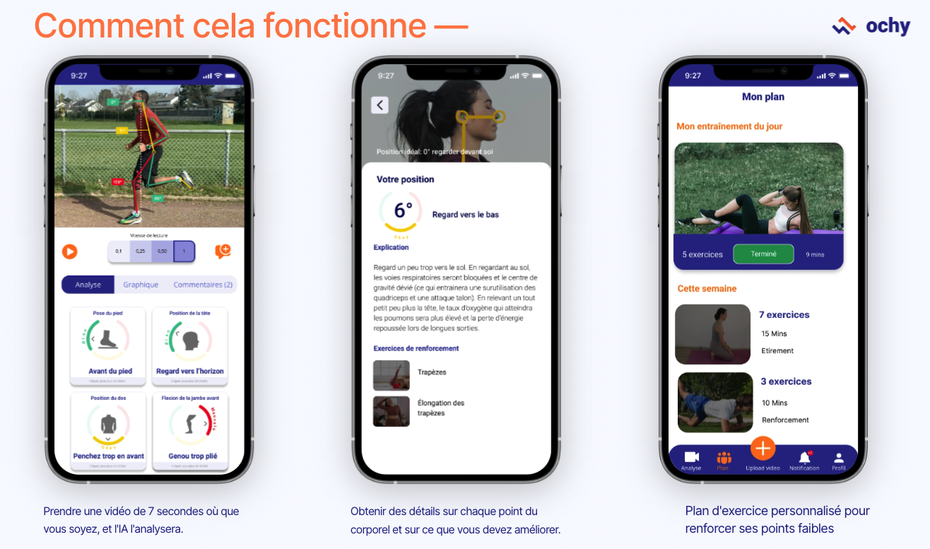 This tool is intended for runners, trainers or health professionals such as physiotherapists or podiatrists. But runners do not necessarily mean marathon runners, specifies Perrine Chapot. “It may be football players who just want to improve their technique“, she underlines.

The price of the subscription is 4 euros per month for individuals and around 200 euros for professionals, depending on their use.

Not just any partners

The technology offered by Ochy does not seem to have gone unnoticed, if we look at the big names with which the Rennes start-up has partnered. Decathlon could deploy this tool to help their customers find the right pair of shoes, while Adidas is considering integrating it into its own platform for runners.

The Paris Olympics in 2024 could also give the company a spotlight. Orangepartner of the marathon event, would like to use Ochy’s technology on athletes – even if Khaldon Even recognizes that there is still work to be done on their side to make it possible to detect several people at the same time.

To meet these new technological challenges and continue their growth, the two co-founders also took advantage of the official launch of the application at CES to launch a fundraiser for an amount of 850,000 euros. A third of this money will be earmarked for technological development, said Khaldon Even. The rest will be for marketing and merchandising, as well as building a strong brand image.