Don’t be fooled by its name, “Buddy” is very French. And this is the first time that visitors to CES, which is being held this week in Las Vegas, will be able to come across this emotional robot in its final form in the aisles. The man behind this beautiful eight-kilo baby on wheels, Rodolphe Hasselvander, took the opportunity to announce the official launch of “Buddy” in the United States.

This robotics and artificial intelligence engineer by training founded Blue Frog Robotics in 2014, after winning the World Competition forInnovation and won 200,000 euros from the BPI to bring his idea to life. “We made very sophisticated robots in the lab but they were mainly intended for professionals and were very expensive.“, explains Rodolphe Hasselvander at the Usine Digitale. “Buddy” is, meanwhile, available from 2,000 euros.

It was his experience with an elderly person around him, with a loss of autonomy, that convinced him of the need to create a robot for the general public and adapted to the concrete needs of individuals.

Use cases with a strong societal impact

Blue Frog Robotics aims to become a key player in social robotics and thus relies on use cases with a strong societal impact – starting with assistance for the elderly, the original application designed for “Buddy”. Typically, “Buddy” is able to patrol a house and interact with the person who greets him. “The robot will behave a bit like a pet“, notes Rodolphe Hasselvander, who praises the benefits of this “benevolent presence” for isolated people in particular. As the Digital Factory has seen, “Buddy” can actually be caressed and reacts to his interlocutor.

But its many sensors, its camera and its two wheels come into their own when “Buddy” notices that the elderly person has not got up, or if he is simply unable to find her. In this case, it sends a notification to the entourage who can then take control of the robot remotely to carry out a “removal of doubt“.

“Buddy” can also be configured to send an alert from a keyword spoken by its owner, unable to get up for example in the event of a fall.

On the school benches

But “Buddy” is not exclusively reserved for seniors since it has also made its way to school benches and is now present in 1,750 schools. It can be used for learning code or languages, but also support children with autistic disorders thanks to a wide range of applications. It also allows children in the hospital to take lessons remotely. 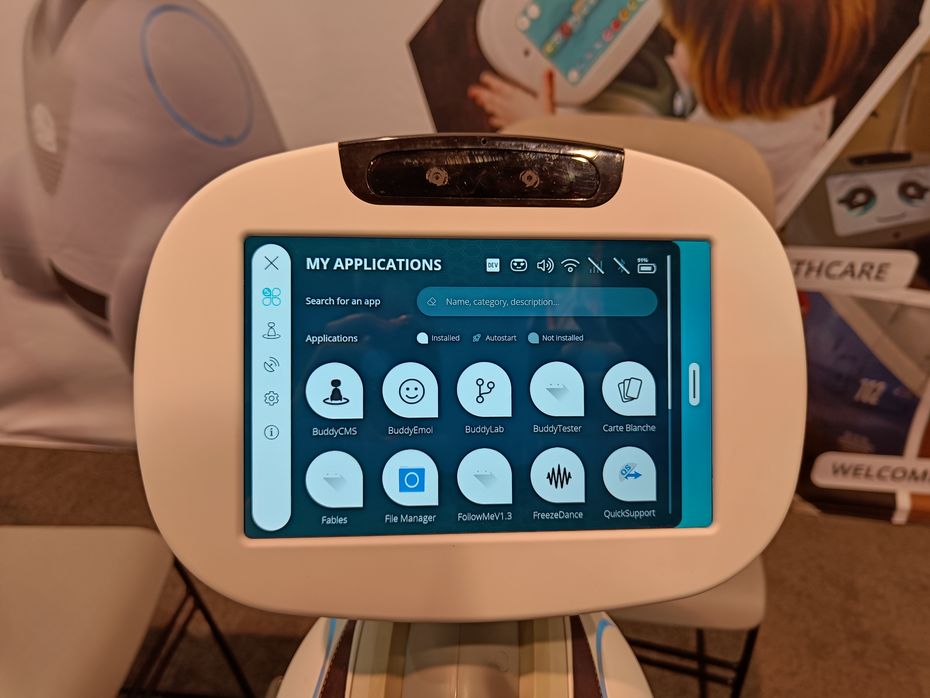 When we ask its creator the added value of a “Buddy” compared to any other type of videoconferencing device, he replies that “this has nothing to do with“.”The robot moves, it can follow the friends in the yard. There is a real incarnation, it allows a lot more things than what we could do with a simple camera“, he underlines, quoting the anecdote of a class which had taken the robot with it during a visit to the Louvre Museum to tell the absent child not to miss anything.

But “Buddy” can put his intelligence at the service of public places or stores, to welcome people and inform them, as is already the case in certain Boulanger stores and certain boutiques. Huawei. Finally, the robot can be used by developers wishing to work on other applications and uses. “We have a vocation to go to the general public, but we are not there yet“, recognizes Rodolphe Hasselvander, who intends to turn more to individuals directly this year.

Many use cases of “Buddy” remain to be imagined. “Today, we develop most of our applications but we already embed applications developed by our partners“, specifies the boss of Blue Frog Robotics, who has set himself the objective of creating a “Apple robots“where everyone will eventually be able to configure their robot with the features they want, from an open application store.

On the right track

If there is still a little way to get there, the company first hopes that the year 2023 will see sales of “Buddy” accelerate – 2,000 robots have already been deployed since the start of its marketing, there a little over a year old. Blue Frog Robotics also announced, during the CES, the integration of a new application suite which now allows customers to very easily configure the assistance robot, while the company was responsible for configuration of the scenarios so far.

With around twenty people currently, the company should double its workforce by the end of the year and raise new funds. “We want to go further and look for larger amounts to go international and develop this whole ecosystem around the robot.“, summarizes its founder.