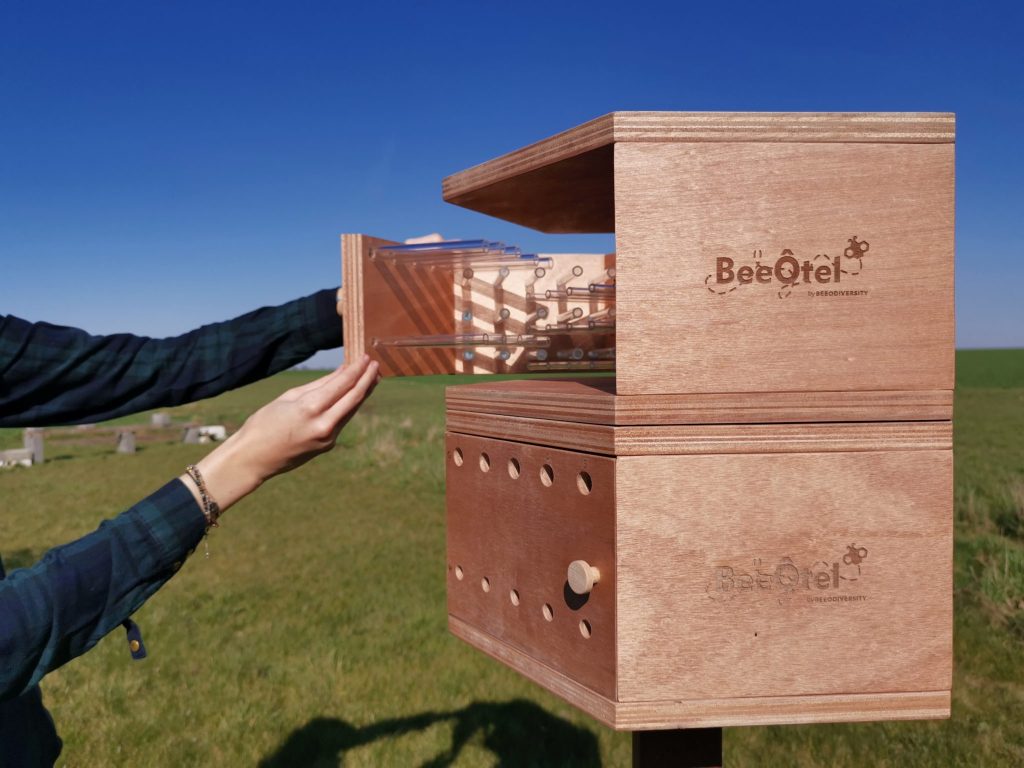 On May 20, 2022, World Bee Day, it’s hard to miss this start-ups. She is currently present at ChangeNOW dedicated to the ecological transition (in Paris from May 19 to 21). BeeOdiversity is a Belgian company that, since 2014, has been using bees to monitor the quality of biodiversity and pollution levels in specific areas. This biosurveillance, or monitoring of the environment by bees, was imagined by Dr. Bach Kim Nguyen, co-founder of BeeOdiversity.

He had the idea of ​​analyzing the pollen carried by these insects to determine the quality of the surrounding ecosystem. “The bees settle on the flowers, details at WE DEMAIN Michael van Cutsem, co-founder of BeeOdiversity. When they are in contact with the flower, small grains of pollen get stuck in their hairs and on their legs. Little by little, the bees will clump together these small grains and put them in the form of balls. Our idea is tonot collect a sample when they return to the colony and then analyze these pollens.”

Pollen, this crucial marker of the state of biodiversity

“Bees are a bit like natural drones that crisscross an area, adds Michael van Cutsem. And pollen reveals unique data: each grain of pollen corresponds to a plant species. We can therefore deduce the diversity of the flora. But also to detect the level of pollution in the sector, which pesticides are used and in what proportions.”

BeeOdiversity can detect no less than 500 different pesticides. Once the analyzes have been carried out, this makes it possible to act to limit the impact on the planet. “Our clients are companies, public institutions or municipalities. They want to‘on the one hand know the impact of their activity on the surroundings in order to be able to modify their production processes. On the other hand, it helps to detect possible pollution in order to protect the quality of life or their activity”details Michael van Cutsem.

Bees assisted by Microsoft and its artificial intelligence

To complete its analyses, BeeOdiversity collaborates with Microsoft via its ShareIA program that supports social entrepreneurs. “We provide them with our know-how in artificial intelligence in order to extrapolate the results obtained and to detect pollution sources more precisely”, explains Eneric Lopez, Director of Artificial Intelligence at Microsoft France. For example, a company specializing in water has every interest in knowing the quality of the surrounding soils. Because this will have direct consequences on its activity, if groundwater and waterways are polluted.

By discovering what is the level of pollution and what pesticides are present thanks to bees, it is possible to deduce the origin of soil contamination. Similarly, artificial intelligence can extrapolate data to identify areas at risk based on water flow. Depending on the pesticide used, one can identify the agricultural crop and therefore find which fields are probably problematic.

“This prediction tool based on artificial intelligence is still under development. It takes a lot of data to ensure that the algorithm will perform well and be reliable. It’s a long apprenticeship and you have to take into account many parameters to achieve it”, summarizes Eneric Lopez. The start-up nevertheless plans to offer a first solution of its kind in 2023 in Belgium and France.

“Farmers are very demanding of this data because they often do not know exactly what impact their phytosanitary treatments have on the soil.notes Michael van Cutsem. The goal, behind, is to help them change their practices to put in place less harmful processes. For example, we can help them switch to organic.”

In 2021, BeeOdiversity bees thus detected no less than 150 different pesticides used on the sites analyzed. “In many cases the levels were above the authorized European levels. Et we detected 25 to 30 officially banned pesticides”reveals the co-founder.

Thanks to the data collected and analyzed, communities, businesses and farmers then put in place measures to rectify the situation and drastically reduce pollution in order to regenerate biodiversity. BeeOdiversity thus works with the city of Knokke-Heist in Belgium.

“In 8 years of collaboration, we have managed to change the ecosystem. We have seen a 400% increase in biodiversity through switching to organic or regenerative methods by local farmers”says Michael van Cutsem.

Very encouraging results that motivate the 18-employee start-up to step up its efforts. It already monitors a total area of ​​100,000 hectares with the help of a hundred beekeepers (and 50 million bees). The latter are also very interested in the BeeOdiversity solution.

Indeed, on average a beekeeper has 30% losses among his colonies. With the tracking of pollutants and the measures taken behind to improve biodiversity, losses generally drop to 7%. No doubt, this positive impact project makes a difference, one bee after another.

BeeOdiversity: bees and artificial intelligence against pesticides – WE DEMAIN