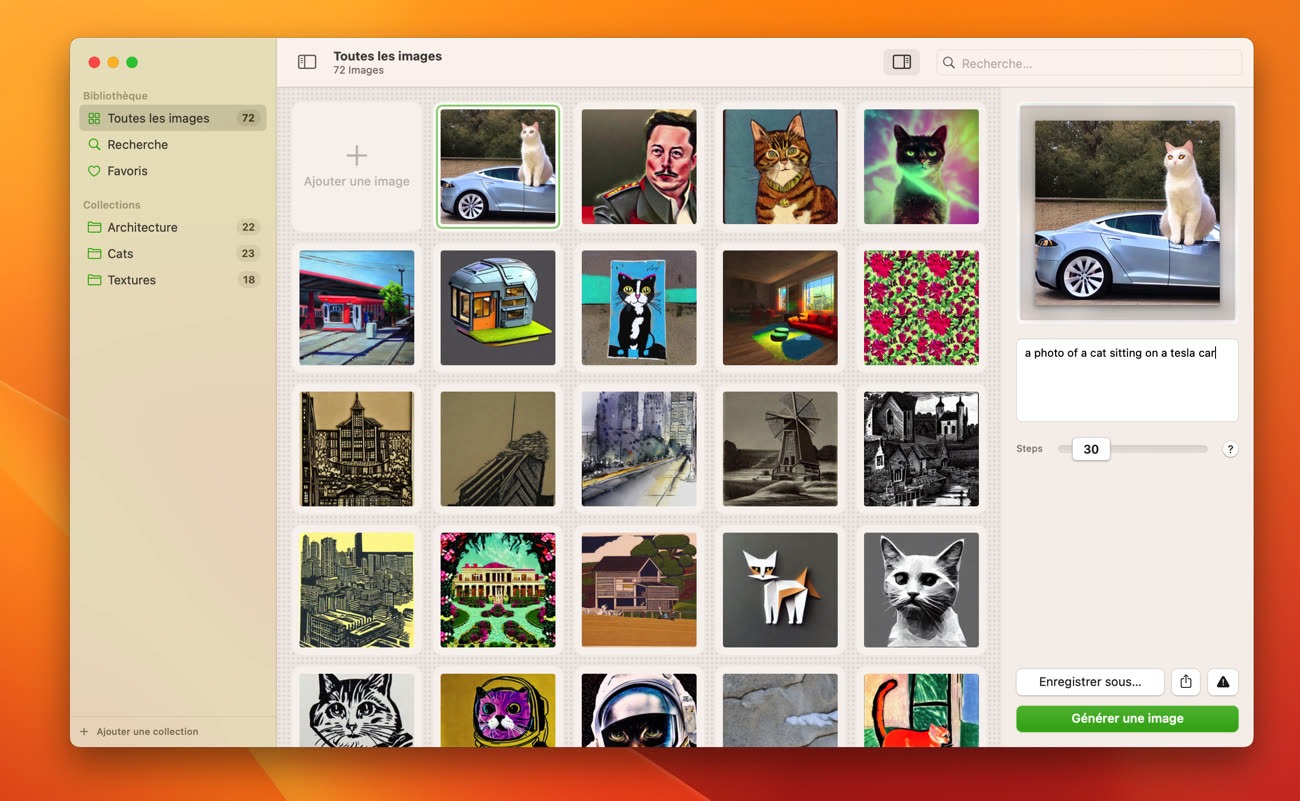 AI Photo (3.49 €) is a new app that is able to generate images from text, an area that has been on the rise for a few months. It is based on the Stable Diffusion framework which has the double advantage of being open-source and running on your machine, without requiring a server. Compared to other similar apps, this one makes two additional arguments: it is available on the Mac App Store and above all, it is based on the Apple-optimized version of the framework.

It is a priori the first app that uses the framework optimized by Apple, which requires macOS 13.1 at least. Thanks to it, the neural network of Apple Silicon chips is correctly exploited, in addition to the GPU, which speeds up processing. AI Photo is indeed fast on my entry-level Mac Studio: even asking for an image created in 100 steps, the maximum offered by the app, I get a result in about a minute. And above all, this image is generated with relatively little RAM, between 2 and 3 GB during my tests.

The difference is noticeable with DiffusionBee, an app that relies on the same Stable Diffusion framework, but not the version provided by Apple. It uses only the GPU and requires a little more time (about a minute for 75 steps, its maximum), but above all it requires much more RAM: up to 12 GB to generate an image.

On the other hand, AI Photo is much simpler, a motivated choice on the part of the developer who explained to us that he wanted to democratize the images generated by artificial intelligence. The app opens on a gallery of images generated by Stable Diffusion. Touch the + button to open a side panel with only two options: a text field to enter the command and a slider to choose the number of steps, between 20 and 100. That’s it and it’s significantly less than its competitors, but it’s a good way to discover and test these new generators.

The generated images are in a single format, a square of 512 pixels side. Do not hesitate to multiply the attempts by refining your request according to the results, but also to save an image which you might like (a drag and drop on the desktop works), because you will not be able to find it afterwards, it is the very nature of these tools that requires it. In addition, if your Mac is a little light on the RAM side, consider taking a look in the app settings to activate a mode that reduces the amount of RAM used. You will get the same results, but a little slower.

AI Photo stores the templates needed to create images, which explains the app’s heavy weight: 2.5 GB. macOS 13.1 is required to install it and its interface is translated into French. The app is sold only on the Mac App Store at €3.49.