Tested this year in Venice, the Maelstrom project platform has a robot responsible for recovering underwater waste. Controlled by a cable system, it can operate to a maximum depth of twenty meters.

Despite its two tons, it dives in search of underwater waste which it then brings to the surface. She is the moving part of a floating and robotic platform, dedicated to cleaning the seabed. Designed as part of the European project Maelstrom Bringing together fourteen partners from eight countries, the set takes the form of a floating barge, empty in its center to leave a pool-like space for the robot to dive into. A preliminary acoustic survey identifies high concentrations of waste and indicates the area to be cleaned.

SAccording to estimates by the Maelstrom team, 83 million tonnes of plastic waste pollute the oceans. Bringing his stone to the fight against this scourge, thehe barge is a response more particularly suited to the cleaning of coastal environments. The robot can thus descend to a depth of 15 or 20 meters and work on an area of ​​70 square meters without having to move the rest of the barge.

Eight cables for a maneuverable and precise robot

The diving robot is controlled by a system of eight cables, connected to four poles, the winding and unwinding of which offer surprising freedom and precision of movement. The robot can thus handle heavier loads than if it were propelled like a conventional underwater robot and ensures its stability in the presence of currents. The precision of this system also makes it possible to circumvent a major difficulty: GPS do not work in water and therefore cannot indicate the position and orientation of an underwater robot.

The floating and robotic platform of the Maelstrom project

Discover the first floating and robotic platform for cleaning the seabed, tested in Venice in September 2022.

” To our knowledge, it is an unprecedented mix between a cable robot and a remotely operated underwater vehicle, two major specialties of our laboratory.explains Marc Gouttefarde, CNRS research director at the Computing, Robotics and Microelectronics Laboratory of Montpellier (Lirmm). We worked on the robot’s controls and sensors, with a camera system and an acoustic sensor that measures the distance between the moving part of the platform and the seabed. An inertial unit also monitors the orientation of the robot once it is underwater. The rest of the engineering was carried out by the Tecnalia research foundation. »

The platform was tested for two weeks, in September, in the lagoon of Venice under the coordination of the Italian laboratory CNR-ISMAR. The robot was then equipped with a vacuum cleaner and a grapple to catch waste such as plastic, tires or fishing nets. ” We encountered difficulties during this phase of experimentation, because, if the weather was very nice out of the water, the underwater visibility was almost nil.describes Marc Gouttefarde. You couldn’t identify the waste until you got just a few centimeters away from them.. »

First trials in the Venice lagoon in September 2022.

In response, the Lirmm plans to carry out work near Montpellier, where the clarity of the water should make it possible to establish a solid database of photographs and videos of underwater litter. ” We have already carried out similar work on the identification of fish“, specifies the researcher. The database will then make it possible to train artificial intelligences so that they themselves designate to the robot the rubbish to be removed. The researchers are also working on automatic waste recovery, ie the possibility for a human operator to click on the waste he recognizes on a video so that the system recovers it. 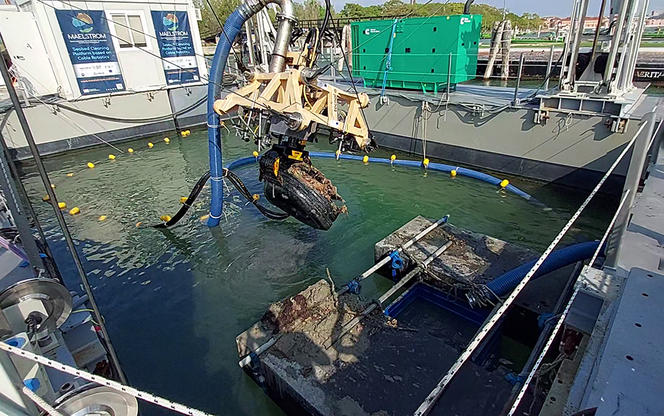 The robot goes up a tire chosen by the grapple.

Other avenues for improvement are also being followed. ” Cable robot systems are easy to scale up to treat a larger area, but it is expensiveregrets Marc Gouttefarde. Another idea, the barge is currently towed by boat, but we can quite imagine a motorized version equipped with a surface GPS to take it to clean specific places. »

Lhe barge is currently towed by boat, but we can quite imagine a motorized version equipped with a surface GPS to take it to clean specific places.

The barge was also designed with the help of Servizi Tecnici, a Venetian company specializing in the construction of floating surfaces for events, for example for fireworks or concerts. The Maelstrom team is considering dismantling the system to test it under other conditions, but the new locations have not yet been chosen. The Maelstrom project also has another component: a bubble barrier system that has been tested in the Ave River in Portugal. It prevents the waste from continuing its way to the ocean and pushes it to the banks where it can be more easily collected. All without disturbing aquatic life.

While waiting for new full-scale experiments, Lirmm researchers continue to work on the artificial intelligence part of the project. Automatic detection and capture of litter would indeed speed up the clean-up of coastal areas. ♦

A diving robot to clean up coastal areas